A whimsical idea to prevent franchises from becoming stale

In an age of greed, it’s become all too familiar to witness publishers over-saturate the market with repetition, and grind their own beloved franchises into the ground in the pursuit of a higher profit margin. More publishers seem to be putting the mighty dollar over critical acclaim, and why not? Gaming is big business; everyone needs to get paid…

The lack of innovation and progression that the industry has seen over recent years is a constant complaint by many, though, with an over-reliance on samey sequels to keep the money rolling in. In some cases it can be profitable, but sometimes it hurts the entire industry, as we’ve seen in the instances where over-saturation has not only killed a company’s own franchise, but killed all interest in an entire genre. It’s just human nature: the more we see the same things repeated, the lesser the impact it can have on us in the future.

It’s a tough situation. We all want new games and to be able to play them in new and exciting ways, but at the same time we also like those constants, the franchises carrying on the stories we love and continuing the gameplay styles that we enjoy. We’re a fickle bunch like this, aren’t we?

I know; at this point you’re all thinking ‘not another anti-Activision piece’, but please stick with me; this is not that type of article. Instead, I ask ‘how do we prevent those games we love becoming stale?’ and look to the most fanciful and unlikely answer.

My idea then: you’ll want to know it, won’t you? Okay, well here it is…

Imagine a future where big franchises are shared and rotated around developers. A future where we get that particular developer’s interpretation on the classic franchise that they’re entrusted with paying homage to…

Imagine Nintendo licensing Epic for their own, darkly unique take on The Legend of Zelda. Imagine Square Enix taking on the Halo franchise to give us their vision of the Master Chief. How about Nintendo reinventing Portal, or Valve having a go at a bleak future for Sonic? I’d dread to think what the horrors of a Suda 51 rendition of Super Mario Bros. would bring to the industry given the source material, but it sounds interesting, doesn’t it?!

Imagine how different they’d all be again if you shuffled those developers and titles around. Why, you ask? Why not, I reply.

It may sound ridiculous on paper. Hell, it does to me reading that back, and yes, the fanciful examples I invented in a matter of seconds would probably not only be ill-advised, but also impossible, unless we stumble upon some sort of development Utopia. You get the basic principle, though: why can’t the base themes from games be open to interpretation?

It’s something that happens all the time in other mediums. For example, Stanley Kubrick’s telling of A Clockwork Orange is vastly different to the way many interpreted from the book. Look at the differences between directorial visions of the book True Grit, with the John Wayne original barely resembling the Coen Brother’s bleak re-imagining.

Movie franchises get rebooted all the time, with different creative visionaries at the helm. Look at Nolan’s Batman films compared to Burton’s. Two very different (but both excellent) directors who looked at one source material, and saw different Gotham Cities and different strengths in that character.

Using that as a decent link into the next medium, different comic book artists draw their characters in their own styles, while the way the characterisation is done differs from writer to writer. Hell, you know how much the music industry likes to regurgitate, admittedly with moderate success. Why couldn’t it work for the games industry? For the most part, we all know the reason; the money men wouldn’t risk it. 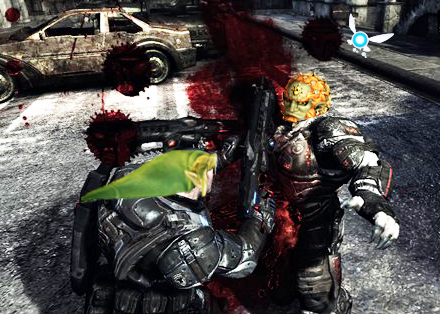 Hey! Listen... out for that chainsaw!

Don’t get me wrong; there would have to be caveats. Respect must be paid to the source material. Although the accompanying image makes light of what I’m suggesting, I wouldn’t want to see a classy franchise tastelessly tarnished in the same way that Gearbox are currently doing internally with their own Brothers in Arms series… Yet the possibility of this system would surely beat the scenario where a developer has either run out of ideas, or has overdone their own IP to the point where they have no choice but to kill it.

In some regards, what I’m suggesting already does happen. It’s become very easy to forget about Capcom going to Ninja Theory to shake up the Devil May Cry series, and Capcom themselves were licenced by Nintendo on more than one occasion to produce Zelda games for different iterations of the Gameboy. Capcom (again!) and Namco are both currently working on their own versions of the same game with their Street Fighter & Tekken collaboration, while Konami and Ubisoft have often collaborated in the past as far as respectful nods in each other’s games, usually in the form of subtle Easter eggs or unlockable costumes. Hell, even Bioware were commissioned to add their RPG stamp on to the Sonic universe.

I’d like to see it happen more and taken a step further, though. We have some of the best creative minds working in the games industry; lets see them get ridiculous with those established brands. Let’s see what a different set of creative juices can bring to a franchise that might otherwise become stale.