There is a medium of entertainment and source of information that has a lot to answer for in regards to the corruption of youth. For years, this sick and twisted industry has shown graphic and potentially scarring images and often relives violent acts in great detail. Many believe it can encourage racism and in some cases actually train people to become extremist terrorists. Not only that, it exposes youngsters to nudity, encourages sexism and is freely sold in many shops around UK without any kind of censorship system.

The medium I’m taking about? ‘The Newspaper’.

These ‘Newspapers’, of which there are a great variety available in pretty much any corner shop in England without the need for ID, have recently been cited by some as having a huge psychological effect on the nation’s innocent youngsters.

A flick through any of the available examples shows graphic sights from all the terrible things happening around the world, such as the aftermath of terrorist attacks and murders, sometimes even going as far as to show corpses or people covered in blood. This will obviously corrupt anyone who sees them.

Many, however, believe that the effects of this go even deeper. When you actually read the details on how the various attacks were planned and executed, you’ll find that these twisted publications are so graphic in their descriptions that anyone who reads them will automatically know how to commit terrorism. A shocking revelation.

We spoke to a conveniently anonymous researcher on the matter, who claims to have research (which we can’t reference directly to) that proves that actual terrorists and killers might have once read a newspaper.

“Some terrorists or killers might have read newspapers at some point in their lives” said our source.

It’s not just the depicted violence that is having an effect on our great nation, though, as a select few of these publications go out of their way to create fear and hatred in our communities. Some encourage the ignorant subculture of wanting to get “all foreigners out of the country”, before they “steal all our jobs and women”. Some newspapers, like the Daily Mail, are so prejudice against everything with their blatant propaganda, that they’re even scared of themselves. 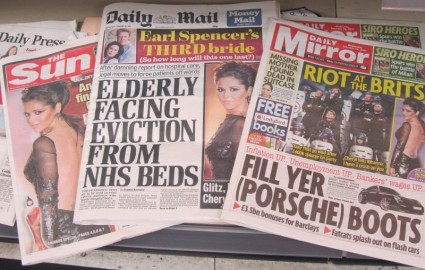 It gets more depraved; some of these papers regularly exploit young women by having them pose for nude photographs, which are then posted on a daily basis only a couple of pages in. Of course, these ‘newspapers’ don’t have any form of clear censorship or age rating on the front and can be easily obtained by children, so that must mean that these shady corporations are trying to push pornography onto impressionable youngsters.

While for some it might just be sheer titillation, anyone who is exposed to a pair of breasts at a young age will almost certainly grow up to be a bigot, sex offender or even a rapist.

We spoke to the experts again:

“Some convicted rapists or sexists may have glanced at Page 3 at some point in their lives”, said the most knowledgeable man on the subject that we could find in ten minutes. Pretty conclusive.

We’re only scratching the surface. For example, some also claim that Newspapers are highly addictive. Our own research alone shows that millions of people around the world buy at least one Newspaper every single day. Scary to think the impact they could be having.

The more I researched this piece, the more the picture began to fall into place about just how unquestionably strong the link is between some of the world’s sickest goings on, and the content of a Newspaper.