Cliffy B, we love you, but…

In a recent interview on IGN, Cliff Bleszinski talked about the future of gaming and the Gears of War franchise. In the interview he expressed his support for motion controllers like ‘Project Natal’ stating that he was preferring that over the other motion controllers, purely because you don’t need to hold anything in your hands. Cliffy B also talked about how he wanted Gears 2 to be a better experience when it was released, and that the issues with the online matchmaking was the single biggest disappointment for him and when it gets brought up it breaks his heart. He also stated that when he reads posts on online forums it hurt him how people identify with the big, buff characters and how there is a lot to be said for the background of the world he’d created.

One of the biggest statements that he made was that he has a Google alert for anything with ‘Gears of War’ in it and that he and the team read as much as they can so they call get the feedback, this includes forums posts too. What better way to test this statement by giving the TIMJ view on what should be considered next for Gears of War.

Ok, so this may be a long shot but here is hoping the powers the be make this article pop up on Cliffy B’s alert box so he can become a friend of TIMJ, and possibly comment on my thoughts.

The first thing that I would like to comment on is the co-op. After the first game, we (as fans) asked for ‘Gears’ to allow us four player co-op. Instead we got ‘Horde’ to play, which allowed up to five players to work together, to fight against waves upon waves of the locust horde. This game mode was excellent for a while but I thought needed some variation between levels, possibly some rotation between the different settings to allow more flexibility. A good idea to could be to add specific mission objectives into the mix, key areas that that players have to take, or tasks to complete during each level.

The second point here, I think I can speak for everyone when I say that we would like to see actual four player co-op throughout the story mode. It’s all well and good allowing us to play just as Marcus and Dom, but it would be nice to play as some of the other main characters too. What could be even better is to give players the choice of who they’d like to play as throughout the campaign, maybe using a selection screen like you would see in Left 4 Dead, allowing the player to pick their own character to play through the story, adding extra replay value.

The story is something that is well presented but needs a lot more character depth. Exploration into Marcus and Anya’s relationship would be good, there is obviously some sexual tension between them, possibly showing some potential vulnerability. It would also be nice to have a section of the story that delves into Marcus’s past maybe witnessing him storming his father’s house to rescue him.

Further investigation into what the locust are doing with the humans is clearly the next step, and finding out where the creatures originated from soon is key. The plot at this moment seems to point towards them being genetically created, it would be good to clarify that. Ty was a character that I personally liked, and in the Gears 2 narrative I really wanted to see what made him take his own life, what horrors he saw. A flashback moment, or maybe introducing a new character would explain this; one that survives the torture and is rescued, then you can delve into that a bit more by allowing him to tell his story. 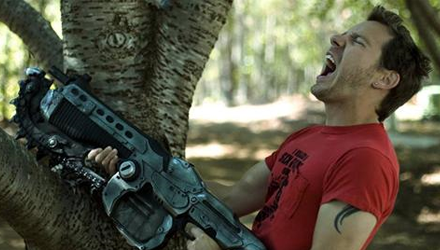 I felt the same after Gears 2!

The weapon and armour on Gears have always suited the mythology and the characters themselves, however the one thing that would be nice would be to have a little more variety with them. One way to achieve this could be character classes and have more than just one type of each weapon. There is also nothing preventing upgradable weapons and armour to be more effective against your enemies. I personally (surprise surprise – Andy) see no reason why an RPG element can’t be added into gameplay, and the above would be one way to achieve that. Also, that silly button bashing mini-game needs to go. It’s okay the first couple of times, but with no variety it’s a little boring.

The level design is something I have always liked but why not remove some of that linearity, give us room to explore or make difficult choices. I’m not saying make it an open world game, but even that could make an interesting concept or spin-off (hint hint). Allowing the player to take on missions in their own time and in any order would be a nice twist on an old format. Being able to explore Sera, above and below ground, would be brilliant. You could even have it so that you travel the world and enter ‘dungeons’ (linear levels) tying in both types of gameplay.

Finally the multiplayer, which turned out to be a bit of a game breaker with GOW2. It’s an untouchable experience when it works, however I think the next game cannot be released in the state GOW2 was. The online infrastructure needs to be 100% bedded down before it’s release to Joe Public. I know it’s a hard ask but nobody likes continuous title updates, look at what happened with not only GOW2, but what’s also happening currently with Modern Warfare 2; people won’t wait around forever.

So, Cliff, I hope you’re reading this and that you take some of these suggestions on board. I think you guys do a good job but there is nothing stopping you from improving that award winning formula. I’m also sure that some of our readers and other staff have some suggestions too, or maybe they just want to disagree with my selection of changes that I’d make.

We love you, but please for the love of god, give us a Gears of War that works properly and will make us want to play through that storyline more than the once, and not feel unsatisfied and demoralised by the end of it. For a free, no obligation consultation, tweet me up on @zerocool3397 or just email me. I promise it’s for the good of the COG’s.