DeKonstructed is a four-part editorial that focuses on different facets of Mortal Kombat’s ninth iteration, while touching upon the series’ history. Part 2 focuses on the successes of the game’s story mode.

Ever since fighting games have been a genre of their own, they’ve always been lacking in a certain something: story. Sure, generally each character is described as having a reason for being at their given tournament, but it’s never really explored more than that within the actual game, save for token and sometimes baffling endings.

In Street Fighter, for example, Chun-Li wants revenge on Bison for murdering her father; Ryu is on an endless quest for challenge; while E. Honda wants to prove Sumo’s validity as a fighting style. In Tekken, Kazuya sold his soul to the Devil for revenge on his heartless father for throwing him off a cliff when he was younger, while Nina has been paid to assassinate Heihachi herself. Yoshimitsu is the head of a clan of thieves, acting as a decoy so that his friends can make off with the tournament funds.

Beyond these short bios, the characters never develop or grow over the course of their respective games.

It goes on with other fighters (I can’t even begin to tell you what the feck goes on in Dead or Alive’s bouncy boobathon), and if you weren’t particularly bothered, you could easily play these games without context and not really miss anything remotely important. It’s the fight mechanics that matter. Storyline in fighting games is always optional.

Is story important to the average fight game fan? Probably not, certainly not in the e-sports circuit, but then developers still go to great lengths to pin down their series with a canon plot once the next sequel is on the way, and the ‘official’ plot is always independent of the player’s actions in the prior games.

I mean, did anyone know that Paul had beaten Ogre in Tekken 3, assumed he was the Iron Fist champion and left, only to discover that the tournament had carried on without him after Ogre had evolved? Me neither… did I care? Not really. Also, I remember beating Ogre’s evolved form with Paul, so erm… yeah!

When Mortal Kombat first launched in 1992, it tried nothing different to its peers. Less, in fact, with all storyline confined to a text that I know I never bothered reading at the time. A lot has changed since then, as in recent years it’s been the one series that has attempted to offer something a bit meatier, providing some very different experiences with its Konquest modes, going as far to borrow elements from RPG and Adventure games. It all started to get away from what Mortal Kombat was really about, however.

In Mortal Kombat vs. DC Universe, NetherRealm Studios hit on a simpler and more obvious way to back their fight-engine with a story. While nowhere near engaging enough, the structure of fights interspersed with cut-scenes worked wonders. It sounds so simple, so obvious, that it’s surprising that very few developers tried to run with this system previously. 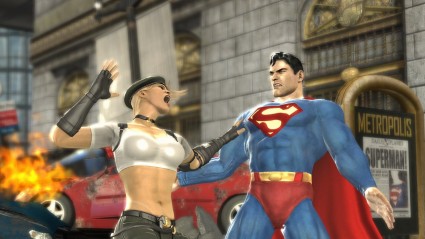 Mortal Kombat vs. DC Universe started the process of adding context to why these fights were happening.

In-between fights, characters would bicker and interact with one another, showing how the fights escalated, which was “really fast” in most cases. It offered some much-needed context as to why Raiden might be coming to blows with his team from the Earth Realm, or why Batman would have to fight his greatest ally, Superman, rather than simply stringing a load of random fights together.

That system later became the perfect way for NetherRealm to handle the rebooting of the MK franchise too; pulling together the plot-lines from the first three games, tinkering with the finer details and still respecting the original, canonical plot from the 90s. This approach to a single-player mode, however simple, achieved something that no other fighting game before it really has (besides forcing you to play with a number of different characters); it has you exploring each combatant’s personal motivations.

Furthermore, unlike in other fighters, the characters do grow here. With MK9 covering the story over the course of three games, they evolve; their costumes, appearance and attitudes change depending on which part of the story you’re in. It feels a like a very organic experience as a result. It’s no longer just a fighting game, but it’s an interactive 80’s martial arts B-Movie.

It’s certainly an idea that could be taken further than currently explored, though. Imagine if losing a fight didn’t simply offer you a choice of retry or quit, but actually progressed the story arc in a different way, showing consequences for both success and failure. Imagine if choosing to perform a fatality in the story mode would have long-lasting effects on the rest of the plot. Imagine if it was still possible to get a logical conclusion come the campaign’s end, no matter what happened in your playtime.

Not all fighting games require a setup like this; I don’t think for a second it would do games like Street Fighter any favours. Yet MK9’s approach to single-player gave me a different type of investment to that of its peers. Not necessarily better or worse, or even deeper, just different. As someone who plays a lot of fighting games, I really appreciated that difference.