Despite receiving mostly positive reviews at the time of release, Final Fantasy XIII has since managed to acquire itself the reputation of the series’ red-headed step child. Fierce popular opinion constantly tells me that it was too linear for at least the first half and that it suffered badly for having no towns or shops. Less common complaints focus on a middling story and its misunderstood combat system, which apparently ‘played itself’.

Its mere mention on websites or social media is guaranteed to draw many a predictable joke about the series requiring a ‘Phoenix Down’. Likewise, collective giggles are raised every time a Square Enix spokesperson publicly calls Lightning a ‘popular character’, despite there being roughly 954879347543 Lightning cosplays at every convention I’ve been to and clearly enough sales to warrant two direct sequels that feature her.

Me? Well, I’m what you might call a Final Fantasy XIII apologist. I quite liked it, but I completely understand why some didn’t. Sure, it was linear for most part and yeah, it was weird not to encounter towns rife with fetch quests for quirky inhabitants, but these weren’t exactly deal breakers in light of what I felt FFXIII did well.

The criminally underrated combat system I mentioned earlier, for example, is one of my favourites in the genre. Many missed the point at the time, whether they were simply craving the ATB system of old I can’t say, but there was definitely a focus shift to your team’s strategic set-up rather than the individual abilities and attacks unlocked by levelling up. That was fine by me as it offered something a little different.

Yeah, yeah, it may not sound like it, but I had come to terms with FFXIII’s public unpopularity. That is, until I revisited series’ darling, Final Fantasy X earlier this year.

Re-entering Spira with laughing man Tidus and his gang inadvertently led me to a startling realisation: Final Fantasy X and XIII share strikingly similar design philosophies, the most significant example being their inherent linearity.

There was a technical reason for this originally, of course; with FFX it enabled Square to ditch pre-rendered backgrounds in favour of 3D locales coming into the PS2-era. The trade-off was that Yuna’s pilgrimage was limited to one path through interconnected environments, with very few meaningful off-shoots and little in the way of exploration.

In fact, it wasn’t until just before the end-game, when the group reached the expansive, rolling green hills of the Calm Lands, that you were offered any real deviational or exploratory choice. 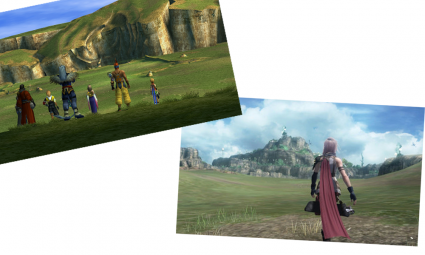 Final Fantasy XIII too, after much of it being completely linear, opens up late on in almost identical fashion and in a similarly styled locale; the grassy acres of Gran Pulse. Famously, here you could take on a number of side-quests that would eventually bag you the ability to ride a Chocobo; a capability also achievable in Final Fantasy X’s Calm Lands at a comparable stage, albeit through other and easier means.

Of course, exploring strange, beautiful worlds is half the allure of JRPGs and wandering around, finding quaint little towns does tend to generate a warm, fuzzy feeling of excitement. Talking to citizens, sorting out their problems, checking out new loot in shops; these are all aspects you expect when going into an RPG. Final Fantasy XIII, however, replaced them all with… a floating ball.

A useful floating ball, granted, one that acted as both your shop and a rest stop, but the loss of charming towns and shops was clearly lamented by many. I didn’t mind so much myself; it was a system that got me items and upgraded my weapons swiftly and efficiently, plus, more importantly, it got me back into the combat far quicker.

Was Final Fantasy X much better in this respect? On face value it would seem so. I mean, it had some towns along the way, right?

Unfortunately, while that much is true, there really wasn’t much to do in them outside of your story objective. As for the shops, they were nearly all identical in layout and although you’d find a travelling merchant at every new location, it was the same guy every single time. With the omission of a different – but always trite – one-liner, he too may as well have been a ball-shaped vending machine for all the impact he had.

Aside from two very different stories, my time with both games felt largely analogous: If the two most common complaints that detractors use to deride Final Fantasy XIII’s existence are actually the ‘problems’ they proclaim, then they were problems that occurred in a universally loved instalment many years prior.

With that, I agree that FFXIII is entirely fair game for criticism and discussion, and I won’t begrudge anyone their reasons as to why it just didn’t resonate – the series always tends to divide fans anyway, and even as someone who liked it, I have to concede that the plot is especially tough going. Yet, I still find it a little baffling to see so many ostracise one game for these two things in particular, but then revere the other in spite of them.