Microsoft released the Xbox One with a promise of greater Kinect acceptance by insisting that all users owned and used one, but on the back of user complaints and losing ground to Sony, they took the decision to release a cheaper Xbox without it.

How does removing speech recognition and motion detection affect a machine designed to be controlled by them?

When Nintendo released the Wii they ushered in a new era of gaming; motion control was the new buzz term. The Wii went on to be a massive success, not in game sales but certainly in console ownership. This left their competitors, Sony and Microsoft, at a huge technical disadvantage.

Sony released the Move, a peripheral that showed very clearly where it’s parentage hailed from. The Move was a more advanced version of Nintendo’s Wiimotes, it meant experiences first picked up on the Wii were transferable, but it also meant that owners of both the PS3 and Wii had no real pressing reason to repeat the same gameplay they’d already tried.

Microsoft didn’t follow the same pattern, instead of duplicating a proven formula they decided to roll the dice in a big way, enter Kinect. Instead of adding a new peripheral for the user to hold the Kinect took all controllers away from the player. They wanted us to use our whole body to control the games instead.

It was not a huge success but it wasn’t a failure either. The motion detection worked okay, it had some stand-out titles, Kinect Sports and Dance Central to name two, but it was hampered by some big problems: The lens needed a wide angle to pick up full movement, so you couldn’t use it in a small room and third party support was severely lacking.

The issue was that the Kinect was an add-on to the original system; it wasn’t that integrated and there was no guarantee the player owned one. Developing for the Kinect wasn’t easy because it was such a different style of control, this meant developers wouldn’t feel confident including support because of a potentially small customer base.

So when Microsoft planned their new console, the Xbox One, they worked to address these issues. First the whole control system was designed to work with voice control and gestures, secondly every Xbox would have a Kinect in the box so third party developers could be sure it was worth supporting. Microsoft, initially, insisted that Kinect was part of the experience and that was non-negotiable.

However, every decision has downsides and for Microsoft the Kinect turned out to be a whole heap of them. The One ended up being more expensive than the PS4, bundling Kinect was blamed for that, players complained that they didn’t like Kinect, posting pictures of them dumping it in the bin as soon as they unpacked the machine.

So, a few months down the line Microsoft has announced a new Xbox with the Kinect left out. The price is lower by $100 (£40 in the UK) not a huge amount but enough to bring it to the same mark as the PS4. Does removing the Kinect make the Xbox One experience worse?

First lets see the obvious problems, which games are impossible to play without the Kinect? 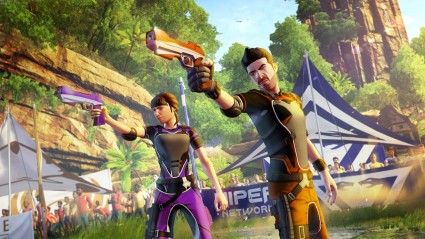 Kinect Sports is one of those you can’t play without Kinect, but that’s not really a bad thing.

Microsoft are really aiming at new users with the non Kinect bundle and possibly they won’t miss the same things an existing user would, but I decided to try and use our One without the Kinect plugged in to see how necessary it was.

The first issue happened immediately, I’ve become very used to saying “Xbox On” to start my gaming sessions, this won’t work without the Kinect listening in. It’s hardly a deal breaker but annoying when you’ve become accustomed to using it. Once on, the Xbox displays a nice prominent ‘Kinect is unplugged’ message on the top-right.

Next I had to manually log myself in using the controller, again hardly a massive chore but it did take me a few minutes to realise it wasn’t going to happen automatically.

The third issue was slightly more severe. I wanted to play Thief but I hadn’t added it to my pins yet (pins are your favourite items, they appear in a section to the left of the main home screen). Normally I’d start it by saying “Xbox, play Thief”. Instead I had to go to the ‘My Games and Apps’ function and find it there. This kind of proves how tedious the interface is to use day to day.

I hit problems with other games too; Titanfall was on my pin list but trying to get a party started with friends led to a lot of button clicks. I tend to talk to my girlfriend on Skype because we live quite far apart and the new update to the Xbox that allows me to snap it means I can chat and play at the same time. However, as with the party function, without using Kinect it’s a lot of button clicks.

If I want to get a picture of a game I’m playing I generally get the Xbox to record some video so I can pick and choose from the frames. This is usually achieved by saying “Xbox, record that”. You really miss that simple phrase when you have to go and find the DVR function, snap it, and get it to record manually.

Aside from the games that simply don’t work without Kinect, actually using the interface becomes a real chore. Unless Microsoft has some extreme plans to combat these issues, the One will suffer badly without voice commands. Further to that, some of the key non-game features like the Game DVR are nigh on unusable if you have to do them manually. The handy ability to save the last 30 seconds of gameplay is only useful if you can quickly record it, something not possible when you have to use a gamepad to navigate the home screen.

Microsoft designed the one to integrate with Kinect and without it their interface choices become laborious and slow. They can fix it with tweaks, sure, but I don’t see how they’ll be able to make it as convenient to use the much vaunted media functions as it is with Kinect.

Using the One without Kinect has shown me one certain thing, Microsofts decision is solely to get consoles off the shelf and once in peoples homes they’ll realise quite quickly that the Kinect isn’t a optional purchase at all, it’s pretty much a necessity.