1991. A video rental store on Tong Street, Bradford, England. That’s where it all started for me. I remember the night like it was yesterday. It was a cold and rainy night and I was at home, immensely bored with the games at my disposal for my much-beloved NES. After twenty minutes of pestering my dear mum, she eventually gave in, handed me a £5 note and sent me off to the video store to rent a game for the weekend, no doubt in the hope that it would give her at least five minutes of peace.

After entering the store, nodding at the clerk and taking in the smell of freshly cooked cinema style popcorn, I set about perusing what was available. I remember that I was in an indecisive mood that night, unable to choose what I wanted to play, but it would be that indecisiveness and prolonged browsing that would change my gaming life forever. As I was trying to pick between two games (I forget which, but probably two run-of-the-mill movie tie-ins, given my age), I started to become very aware of a lot of commotion coming from the back of the store. Bemused at the mixture of cheering, booing and groans of anguish, my curiosity got the better of me and I wandered in that direction to see what was going on.

The noise took me to a dingy, poorly lit backroom, where I found around twenty kids of vastly differing ages crowded around two arcade machines. They were playing a fairly new title, going by the name of Street Fighter II.

I was in awe. NES? What freaking NES? I fancied myself as a budding gamer at this point, I bought all the mags, I thought my finger was on the pulse; just how the hell did I miss this?! I remember being nervous as hell, but being warmly welcomed by the guys there. I was surprised as I didn’t know any of them, but people made way so I could get a better view of the screens and talked to me about the fights being played out. I watched, stunned as these kids each took control of one colourful character before pummelling the shit out of each other.

I was offered a go a couple of times, but I chickened out, being that socially awkward kid. I didn’t play at all that night; instead I rushed home to wax lyrical about what I had witnessed, about how I was going to go back the following night. I was so excited that I’d even forgotten to rent a game. Not to worry, that money would come in handy tomorrow. 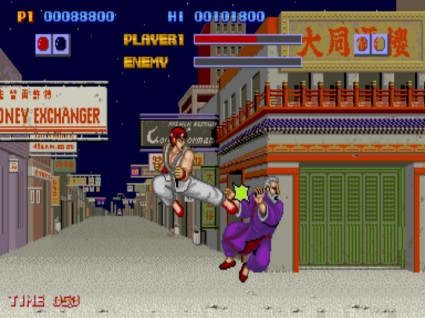 Although I started on Street Fighter II, this is where it really began.

I got my first taste of Street Fighter II that very next night. Oh boy did I play. I sunk everything I had available to me into those cabinets, and it was worth every single penny. I’d already been harassing the other kids for tips at this point; I had an understanding of how it would go. I held my own too, considering, but admittedly I got my ass handed to me more than I won. It didn’t matter; it was a great experience. I was utterly in love with this game.

At its core, Street Fighter II’s strength lied in its simplicity (and still does in new iterations). It was a pure, uncluttered game, allowing for infinite strategies, always evolving you as a player. You could play against ten, twenty, thirty different people in a row who were using the same character, and not one of them would use the same tactics. It required you to think, spot patterns and hit weaknesses hard once you saw them. You’d need to be able to change your style on the fly, knowing when to play the defensive game, picking up the hits when you could and when to force someone into a corner to hit them relentlessly with everything you had.

You needed to know how to play the subtle mind-games in gameplay, how to plant ideas in people’s heads through nothing but your actions. When you lost, it never felt unfair; you could always spot what you could have done better. Like no other game, defeat just made you want to get back up, dust yourself off and try again. Not many other games could have that effect, at least not on an easily frustrated ten-year-old me.

As crazy as it sounds, it wasn’t just about the game itself, though. It was truly great, yes, but there was this incredible buzz that formed around it. In this tiny little room in the heart of a horrible area, kids of all ages and backgrounds would convene for the coming year and beyond, forging friendships amongst this group of initial strangers. 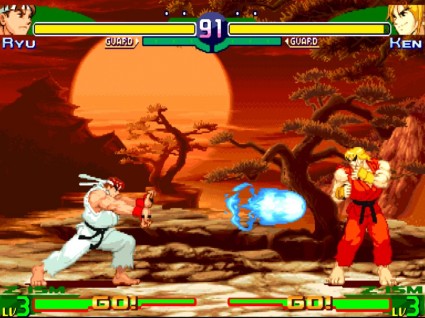 Ever a more iconic fight than the red versus white?

Naturally, fierce-but-always-friendly rivalries were formed very quickly and could rage on for months. When you weren’t playing yourself, you’d cheer or jeer over the shoulders of people doing battle, offering support almost as passionately as if you were watching your favourite football team. It became a real spectator sport, with banter and jibes flowing back and forth, but always in good humour, always light-hearted. You’d talk and brag about the fights you saw or took part in for days afterwards; those last-second cheap shots you got in that won it for you or when you annihilated your biggest rival, finishing them off with an impeccably timed Dragon Punch.

“What about that cocky kid who was aimlessly spamming the hundred-hand slap and cheesing his way to victory?”

“Yeah, it was great when someone finally took him down, wasn’t it?”

It was truly a game of ‘Did you see that?!’ moments.

You’d think that getting all these kids together from a questionable area in West Yorkshire would be asking for trouble, but it never once spilt over. If it ever got heated against someone, they’d be cheering you on afterwards, and you them. You’d walk in as strangers, sometimes even enemies and come out with more respect for each other than what you both went in with. This is what the game did to people.

You could be forgiven for believing that this was a fluke born of bored local kids with nothing better to do, but as I started to visit ‘proper’ arcades in the local town centres, it was clear that this was not the case. It was everywhere, an unexpected by-product created by a quality competitive multiplayer game, and if you talk to any other Street Fighter veterans, you’ll likely hear a similar story to mine no matter where in the world you’re from. This camaraderie was seemingly a universal phenomenon and, I might add, a primitive example of a gaming community. 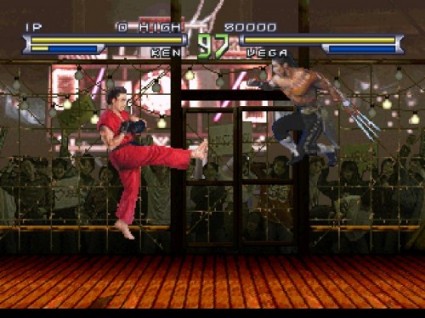 For better or worse, this existed...

Since then, with home consoles spelling the end of arcade culture as we knew it (but not my penchant for Street Fighter), those ideals haven’t wholly died along with it. It simply shifted from the physical plain to the virtual, thanks to the explosion of the Internet, through forums, and websites like this one. Bizarrely, as that happened, fighting games declined in popularity just as online gaming was on the ascendancy, just when it would have been best placed to offer the genre new, exciting possibilities.

Fighting games couldn’t be kept down for long, however. The genre came back with a vengeance in 2008, thanks again to the series that started it all, again paving the way for other fighters to thrive once more. Street Fighter IV grabbed everybody’s attention and captured imaginations, not least of all mine. I’ve been playing it on and off for three years now and I know that I’ll continue to do so, recently reinvigorated by the excellent 3DS port and a fight-stick Christmas present from my awesome wife.

However, as much as I still love it, with that shift away from the arcades to the online arena and the safety of anonymity, the experience has inevitably lost something. Without that intimacy of the face-to-face interaction I mentioned above, without the cheers and slaps on the back for doing well, the feeling of community, even playing with people you know is diminished slightly, and it can never be the same again. 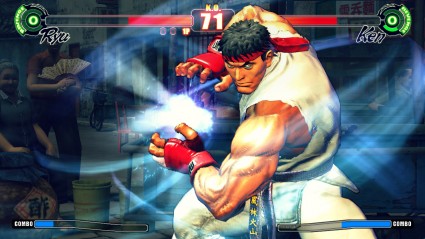 Truly the pinnacle of the fighting genre.

You’re probably now bored of the misty-eyed old man talking about the good old days and Hadoukens gone by, but like the swinging 60’s or the funky 70’s (the less said about the 80’s, the better), I guess just you really had to be there to fully understand it.

Don’t get me wrong, I wouldn’t swap the way that the Internet has revolutionised the gaming landscape for anything resembling the way it was back then. It’s a massive wonder, being able to play against people around the world from the comfort of your living room, even more so to have the ability to instantly share experiences and opinions online away from the games. Modern communities bring people together from all walks of life like never before, and that’s something that has to be respected.

While I’m happy that the aspect of community has survived, evolved and continues to grow in this way, what you must understand is that for that moment in time back in the 90’s, it felt like a movement; like we were part of something important. Community survived, but a small part of me definitely died along with arcade culture and I certainly lament my own minor part to play in its demise.

Still, we need to look forward at times like these, not back, and there’s plenty of positivity ahead, not least with Capcom celebrating Street Fighter’s 25th Anniversary in the upcoming year.

While I’m sure that they’ll find a suitable way to sign off on 25 amazing years, for now I’ll simply celebrate in my own way, reflecting on how I’ve followed the series through Super and Turbo Editions, Alphas and EXs over many formats (including the original Game Boy), even that damn movie tie-in. I somehow missed Street Fighter III, something I’m only just rectifying now, thanks to XBLA. I reflect on all the good times the series has given me; the close-run fights, the excitement, but especially the way it taught me to not just power through adversity, but to learn from it and better myself.