TIMJ at the Movies: Doom

We’re living in a world where convergent technology is becoming exceptionally impressive and integrating itself into our lives as a result. Phones that can check train times, browse the internet and let you experience first hand how corny the first Final Fantasy was, toasters that not only serve the purpose of nourishing us but also leave jaunty little messages to start our day, games and movies seamlessly integrating into a creative powerhouse, strawberries and chocolate spread!

Ok, you might have noticed the odd one out there. No, not the strawberries or even the conversationalist toaster. As we all know games and movies combined have roughly the same affect of plonking a noisy car next to a crowd of horny chimpanzees. At least one of the involved parties is going to end up covered in bodily excretions and feeling slightly ashamed of themselves… well I did say roughly the same effect. So with that in mind I’m going to be spending the next few weeks scraping the barrel of video game adaptations in the attempt to find one that actually does justice to the source material. I mean, they can’t all be bad, right? Right!?

The first instalment of TIMJ at the Movies takes us to Mars, as demonic (well, kind of) creatures go toe to toe with The Rock in Doom.

The Game
For those of you who aren’t aware of the events of the original Doom… you’re an idiot, but I suppose you still deserve to be synopsisised. Doom is widely regarded as the game that most FPS’s have to thank for providing them with inspiration, expanding on Wolfenstein 3D’s already impressive engine by taking to steps to really immerse the player in the hellish world that they were fighting through. Well I say world, Doom actually takes place on the two moons of Mars after a transportation experiment results in the forces of Hell itself crashing the party and obliterating everyone but a lone Space Marine, which is where you come in.

What followed is a relentless onslaught of fire breathing, mini-gun toting demons for you to chainsaw, shotgun and plasma into squidgy little bits. The fact that the phrase “Doom Clone” was originally a more widely used descriptive term than First Person Shooter shows just how much of an impact Doom had, so it’s a safe bet that Universal Studios didn’t fully appreciate the impossibly large boots that they had to fill when they decided to attempt the adaptation. Attempt they did though and like many of the gamers who has fond memories of Doom introducing us to just what games could do, I eagerly sat myself down to watch.

The Film
I’m going to come right out and say it, when compared to the majority of monster flicks, I thought Doom was actually not that bad. As an adaptation of one of the most influential games of all time however, it’s just all kinds of wrong. I try to keep an open mind when film studios play around with the source material. Sometimes even the biggest games just won’t translate onto the big screen, it’s completely understandable. Considering ‘Doomguy’ is the only character across the first two games that isn’t a spiky murderous hellspawn I even went into this thinking that it would be an achievement if they managed to weave an even remotely engaging plotline. For a gamer/film fan as cynical as I can be, I felt that I was being exceptionally generous, so why the hell did they go and take the only course of action that would make me want to volunteer myself for the nearest sensory deprivation class!?

Now I’m aware that there’s no textbook guide on how to bring a video game to the silver screen, since let’s face it; no one has really done any more than an average job up until now. That being said, there are a couple of pretty well established rules on what not to do and Doom breaks the holiest of them all: No unnecessary plot changes. At first glance the narrative is deceptively similar but during the first break in the action the whole thing is essentially jettisoned out of the airlock. Hell is never even mentioned in Doom (apart from the films tagline bizarrely), the monsters that are running riot on the station are humans who have picked up a nasty infection that has different effects depending on whether the recipient is good or evil. Now let’s ignore the complete stupidity inherent in the idea that this extraterrestrial virus has a conscience, just what exactly is so uninteresting about the demonic forces of Hell being granted access to our universe that deems it unworthy of forming the driving force of the plot? Instead, we have a group of Lemmings being picked off and transformed by this indecisive infection until only a few remain for the film’s climactic escape; we have Resident Evil essentially. 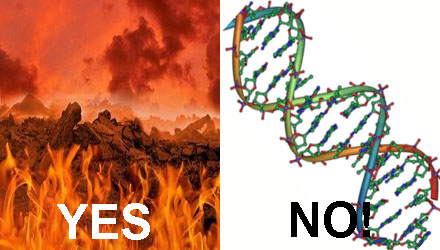 It's not bloody difficult!

Speaking of those Lemmings, how do they measure up to those of the game? Pretty well actually, although that might be because the protagonist of all Doom games is entirely mute while every other character in the game exists solely to throw fireballs at you and be shot at. It’s all pretty clichéd to be honest, with the majority of the characters falling into the tired old horror movie soldier stereotypes that we’ve already seen in 28 Weeks Later, Dog Soldiers, Predator… and of course, Resident Evil. That being said I was pleasantly surprised at how much of an ass The Rock turns out to be in this film, then again he could star in a film as the goddamn Tooth Fairy and probably still be the coolest thing about it! I’m sorry what? Oh… With Julie Walters? Oh I see…

The demons… sorry, nightmarish man-flu sufferers don’t translate very well either, although that could be because most of the more interesting demons are completely non existent in the film. I get the feeling that the filmmakers painted themselves into a corner when they dropped the Hell context, since it’s pretty difficult to explain a bipedal humanoid becoming infected and then turning into a giant, floating, fire-breathing ball or a minigun wielding Minotaur. Instead we have to make do with a few Imps and an entire waiting room full of mindless zombies. The Pinky demon does make a brief appearance but by that point the tedium has well and truly set in and the monsters that inhabit this version of Mars never got close to inducing that feeling of sheer awe when you first encountered a Cyberdemon or Hell Knight.

Now Doom does deserve some credit, as it’s apparent that the film-makers have made a concerted effort to pack as many fan serving references to the game as possible, although that doesn’t make me any less angry that they ignored the entire context of the game. As The Rock claims the Bio Force Gun and looks on in marvel declaring it the “Big Fucking Gun” it’s obvious that at least a bit of homework has been done, but the most noteworthy attempt to capture the feeling of the game is an extended scene which is shot from the perspective of the character Reaper. The mere fact that  any kind of first person perspective has never been attempted before in a big budget Hollywood flick is noteworthy and it’s admirable that a real attempt has been made to actually recreate the experience of the original Doom. However it really only serves as an example of how this kind of shooting technique only works when there’s a level of interaction involved. The way that Reaper glides around corridors while enemies pop out from behind walls before being popped in the head reminded me of a haunted house ride rather than any of the Doom games; it just feels too on-rails and having all of the control taking away in those kind of environments is actually quite off-putting at times.

The first person sequence really sums up my feelings on Doom as a whole in that it has got good intentions and some nice ideas to back them up, but the whole thing is let down by some unnecessary stretching of the creative license. Doom isn’t a terrible film by any stretch of the imagination and throwing in references to the source material is always welcome, but it could have been one of the first video game adaptations to really do the original justice if only they had decided not to deviate from what made Doom so damn cool in the first place.

Ok so not a good start but I’m certainly not going to be giving up there. There has got to be a single movie based on a game that doesn’t offend the sensibilities of anyone who’s ever played it. What’s everyone else’s thoughts on Doom: The Movie? Also, pass on any other suggestions for video game adaptations you think deserve a beating… ahem… I mean review and I’ll be happy to oblige.