We’re at war folks. Every day it claims new casualties and new weapons are invented and implemented. All sides fight fiercely for they believe they’re right. No-one backs down, no-one gives up. The reasons for it are trivial to some and everything to others. It affects us all. To which war do I refer? Iraq? Afghanistan? The War on Terror? No, it’s the PC Games War!

Publishers have been fighting pirates for years, trying to figure out ways to stop their creations being pirated. As usual, every new method is worked around and made obsolete and the battle rages on. Just like in any real war, the civvies are the ones hit hardest, and that means us. Anti-piracy measures have always been a bind; CD keys, online registration, having to be logged in to your special account. Then the money men started getting vexed with the shops selling pre-owned games at a profit the publishers saw zilch of, so they invented Online Passes because God forbid they miss out on a few extra quid. So that’s the second-hand trick fucked up for everyone.

Not content with that, however, many publishers have implemented a new system which could spell doom for those of us will unreliable internet connections; a DRM that needs a constant feed to the net, like a foetus. Assassins Creed creators, Ubisoft, have been trying their luck with it since Assassins Creed 2 hit Windows and are gearing up to stick it in the PC version of the upcoming Driver: San Francisco. Is it good or bad? Why is this crazy system being implemented? Here we go…

Umbilical fun
So here’s the idea. You boot up your new copy of Driver, enter the ridiculously long CD key and sign in to your uPlay account, Ubisoft’s way of keeping it in the family. You start the game and enjoy its stunning visuals, high-octane action and rollicking plot. Probably. After a few hours, you’re in deep, happy to be back behind the wheel. Suddenly the game pauses and quits. You sit, open-mouthed, controller (or if you’re insane, mouse) now held limp in your shocked mitts. You squint and lean forward to read the message that’s just popped up.

[You have been disconnected from the internet. Driver: San Francisco needs an internet connection to play. Please check your internet settings and restart the game.]

You’re kicked back to the main menu. You drop the pad and dash over to your router, nestled at the bottom of the stairs. The dog has pulled the cable out, cutting you off. You plug it back in and restart the game. You click Load Game and once again your jaw drops. The game didn’t save when your connection went; you have to do the mission again. At this point you quit the game, eject the disc and start using it as a coaster because of course you can’t trade it in now you’ve gone through the ten steps of proving you bought it.

On paper it sounds absurd, but this is essentially what will happen. It’s been tried and tested with Assassins Creed titles for years and apparently works. Except it doesn’t. Is it needed, is it really that effective and, most importantly, is it corporate bullshit? 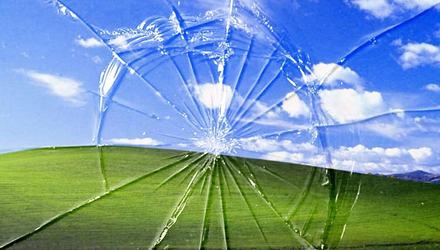 One of the more expensive possible results of the aforementioned scenario...

Failed experiment
So Ubisoft obviously think it works because they’re sticking it in their new game, right? Well it doesn’t, on so many levels.

Firstly, I’ve seen perfectly playable, illegal and downloadable copies of all three Assassins Creed games. I’ve seen them working without being bothered by the DRM system. I’ve even seen friends using certain programs to work around the multiplayer system, crippled by the lack of DRM authentication, and engage in lag-free, perfectly enjoyable romps with their mates. While I’m not condoning piracy or any of that, the Umbilical DRM (that’s what I’m calling it) is obviously of no threat to these canny hackers.

Secondly, there was so much controversy around it that Ubisoft are actually removing it from their older titles. After years of negative feedback from PC gamers across the world, they’ve done the smart thing and changed the system so you only have to have a connection when you first register the game. AC2 and Splinter Cell: Conviction have been earmarked for the change, which is great.

So then, why the hell are they jamming the Umbilical system into Driver?! Why would they continue to use a method that failed in every aspect? The hackers laughed at it and the people hated it. Everyone on all sides were against it, and still are. There is no reason for Ubisoft to use it again. Except one; they’re trying their luck.

Now don’t misunderstand me here; I love Ubisoft. The Assassins Creed series is one of my all time faves and (almost) anything they touch turns to solid gold. They brought Prince of Persia back from the dead and aren’t afraid to go against the grain and put out some genuinely good new IPs and concepts.

With that said, they have seriously dropped a bollock with this one. The Umbilical DRM is a proven failure in every respect. In any other business, it would be condemned to the annals of shit, never to be spoken of again like Reggae-Reggae Ketchup and the first Hulk movie. A new think tank would be assembled and the next attempt would be debated.

Yet for some reason that just hasn’t happened. Ubisoft have wheeled out the failed experiment, resurrected it and presented it as if nothing had happened. With a nervous smile they announce it as new, waving their hands at the zombified concept like used car salesmen. The cries of jeer from the hackers and protest from the people are ignored. They just keep grinning. Then they retreat to their bunker and wait for the inevitable shit-storm that will, more than likely, yet again force them to bin the Umbilical monstrosity and finally come up with something new.

In a way, I feel sorry for them. They came up with what they thought was a foolproof system, maybe an end to the war. They worked on it for ages and presented it as a solution to the piracy problem. It must have been crushing when everyone hated it and flamed them for it. I can imagine the creator of the Umbilical DRM, called before the board, throwing out his arms in exasperation and crying ‘Well? What the fuck ELSE do you want me to do?!‘ to shrugs and concerned looks from the suits.

The simple fact is, it failed and no amount of pushing is going to make it work. The pirates have figured a workaround, as they always do, and the people have had enough of it. Sticking it in any new games can only end badly… or can it? 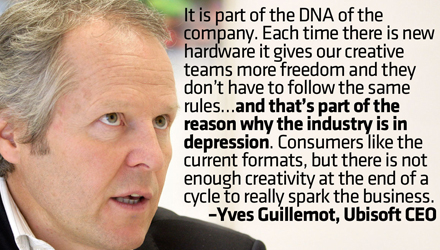 Maybe you should put on of those 'creative teams' on INVENTING A NEW DRM SYSTEM!

Fundamentally doomed
Let’s say, for the sake of argument, that I’m wrong. Maybe Ubisoft haven’t just wheeled out the same shitty system. Maybe it’s new, improved and better equipped. Ubilicor 2.0 Mark 4. Maybe it is ultimately hack-proof and there will never be a workaround. Maybe I’m talking shit and there is no workaround; I can give you no proof so it’s up to you to decide if you believe me or not.

Even that doesn’t get around the fact that it’s fundamentally stupid. I personally have a reliable internet connection that rarely drops, but many of my friends with sketchy ISPs have no end of problems. A close mate of mine had internet that went down for hours at a time, his only solace the fact his Xbox still worked offline. Another friend had to reset his router every few hours because it would lose connection. The simple fact is the internet is not reliable, and most ISPs even less so. Basing the fundamental playability of a game on the possession of a steady internet connection is absurd.

Many other companies have got around the piracy problem without messing with the user. Steam, for instance, runs through its own client. You can get all the files for a Steam game illegally, but without the secret, special permission files you get when you purchase the game, they’re useless. Just files in folders. It’s the bridge to the client those little files create that make it all work. You don’t need to be connected to the net to play your Steam games either, unless of course you want to play online.

OnLive is even more pirate-proof. You never actually own the game, or any of the files; you only get a pass to play it. The game is stored on the OnLive servers, and as you play your controller inputs are sent to that server. The actual processing is done there, and all that’s sent to you is a HD video stream of your game. Essentially, it’s like having a controller and a screen in your room, but the game is running on a computer 10,000 miles away. You never get the files, so there’s no way to crack them. All purchase and permission info is kept on the servers, so to mess with that you’d have to hack them. To me it seems they’ve got it sewn up pretty tight. Oh, and if you lose connection, your game is saved as if you had it on your system.

What Ubisoft are doing is barbaric and outdated. It presents no challenge for pirates, therefore failing to fulfil its primary purpose, while creating another barrier for gamers who just want to play legit. When there are other methods out there that are more successful and better for the consumer, their reasons for flogging this dead horse are beyond me. It creates one more reason for gamers to seek out illegal methods of playing their favourite titles, and considering the recession and bullshit with Online Passes and pre-owned games, it’s not like they even need another reason.

Where do we go from here?
To be honest, I doubt anything I’ve said here will matter. As usual, Ubisoft will do what they like; a characteristic which usually endears them to me. They will implement the Umbilical DRM (2.0 Mark 4 or otherwise), cross their fingers and hope for the best. They can do no more. It has been tried, tested and proven a failure. It can no longer rely on its merits or inner-workings. The only thing that will stop it sinking once again is luck, and relying on that is risky business. Add to that the attraction of the piracy culture and they could see their sales dropping even more, with players driven to acquire cracked copies because that’s the only way they can be sure they can play whenever they like.

Since the uproar has started early this time, it’s possible that Ubisoft could decide not to implement the system after all. They’ve still got a while to make a decision, with Driver: San Francisco not due until 1st September. My advice to Ubisoft would be to make the most of August and think real hard about whether they’re doing the right thing.