I dismay sometimes, I really do. Whenever we hit the silly season release period, we get our usual glut of new big games, and as always, the fair amount of them are sequels. I can live with sequels, they’re important to the industry, and hell, who doesn’t like more of something they enjoy? That said, there definitely comes a time when you have to say ‘enough is enough, we’ve taken this too far’, and I’m looking at you Activision.

In this sense, it makes me sad when I see the same people falling over themselves for the next Call of Duty title for the sixth time in as many years, and I expect the same people to be doing the same again next year. This made me especially sad when Black Op’s seemingly went on to break sales records recently, leading to our man Neil to claim it as proof that gaming is now the number one choice of entertainment across the globe. Being a site that prides itself on the free-willed opinions of its writers; I thought I’d offer an alternative side of the argument in how the continuing success of CoD, irrelevant of quality, is actually stifling the industry.

I must let you know that at this point, I’ve not played Black Ops, and nor do I intend to unless it’s on loan, rental or review copy. I recognise that the CoD engine has always had a great feel, that the combat feels fluid and the graphics look great. I’d wager that if I was to review the game as a one-off, I would struggle to pick a lot of faults in the overall package itself, so where is my issue? Namely, the lack of progression in six years, which is simply down to money.

You see, this is an article I was going to write last year. After Treyarch’s last go at the series, World at War, I’d decided then that I’d had enough of playing through that same CoD every year. I could see already that it wasn’t going to make any major strides in new entries, at least in the near future. Prior to Modern Warfare 2’s release, I felt like I was the only one in the world uninterested in playing a CoD game again; I was done with it. Somehow, though, I allowed myself to be peer-pressured into getting it, following everyone and their dog telling me how amazingly different it was and that it had ditched the invisible trip-wire mechanic that I had long grown bored with. I was cynical, but decided I’d take the gamble on that basis.

I wasn’t too surprised that nothing was different at all. The trip-wire mechanics remained, only poorly disguised by the fact you had to follow one of the most one-dimensional and unlikeable characters ever conceived around as he triggered the invisible trip-wire on your behalf. I spotted it in the first mission, yet bafflingly I seemed to be the only one who didn’t fall for this attempt at misdirection. In all areas, my original concerns were fully justified; it really was the same game as CoD4 (which was my favourite in the franchise), only this time Infinity Ward proved that they had accidentally stumbled onto a well written plot in that iteration by coming up with one that had more holes in it than a ten year-old underpants. Hell, I haven’t even got onto the multiplayer, the thing that everyone says that CoD is all about, that was broken and a chore thanks to glitches, exploits and bugs. In spite of that, it would have been an enjoyable game to spend some time with, if I hadn’t played pretty much the same thing five times previous. Call it CoD fatigue if you will, but I seriously don’t understand how people aren’t bored of this formula by now, or even have the balls to vote for it come the Golden Joysticks Awards. 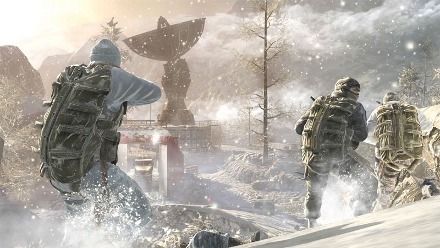 Looking forward to playing this again next year?

I have to reiterate at this point, take any of the CoD games as a standalone product and there is undeniably a lot of quality there, even with some of the less desirable elements of the multiplayer. Hell, if someone had never played a CoD game before, I would quite happily tell them to try any of them from CoD4 onwards, and would suspect that they’d enjoy it immensely. I know I certainly would if I was still a newcomer to the franchise. However, in that case they’d definitely be none the wiser as to just how little the franchise has evolved in six years.

Activision’s intent on milking the franchise dry is the main cause of this. I can’t blame them for it, it clearly makes them money, keeps the company ticking over and in profit, but it means that whoever develops the CoD games is under pressure to take less risks. I don’t need to tell you how that doesn’t help with pushing the game, or the genre, forward at all. It’s not the corporate approach that’s the real surprise here, though; it’s the gamers’ apparent willingness to pay over and over for stagnation.

It’s made even worse when you consider that the same multiplayer glitches keep appearing; the area that many consider to be the reason they shell out for it. In the last six years I’ve played betas of shooters that had less glitches than any of the full retail releases Activision have put out in this franchise. You can say what you like about the Halos or Battlefields of the industry; I’ve never seen match-killing glitches of which have graced CoD. While there is a valid argument that you can’t always account for every glitch or exploit until the game is out in the wild, the online in this case is a very small and self-contained compared to other online games and I can more than understand people’s disappointment to see the same type of glitch ruin the game two years running.

I worked out last year that with MW2 I alone paid approximately £200 on a series that has rarely looked to reinvigorate, rarely looked to push the envelope like the market leader it is perceived to be. I regret every penny of that money spent knowing where the series is now, as I realise that I’ve contributed to that stagnation I now find myself complaining about. It’s fair to say that if the new games came at two-year intervals or longer, or even just made more of an effort to add enliven and strengthen what it offered, I honestly don’t think I’d have this aversion or blasé approach.

Please, don’t misunderstand, I’m not against a sequel strategy at all, all for it in fact, providing that the new games continue to improve things, freshen things up, tighten bolts or at the least further a progressive story arc (look at Ubisoft’s big hitters for an example of how to do this well), but an annual strategy adopted in the way that Activision currently have is draining the life out of not only Call of Duty, but also other titles in their roster that I at one time used to enjoy.

While I’ve wised up, I struggle not to find bemusement at how other people still seem happy to hand their cash over for a barely different experience for the sixth year running. I find it incredible that we are in an industry where most punters, including many people I know, will bemoan the lack of creativity on one hand, then reward just that with the other. The bemusement quickly turns to fear, however. A fear of where the industry could head if this trend continues. Other publishers must see Activision staff wearing their money hats and wonder if they should try to emulate, adopting that cold, sterile money-making strategy where progressing and improving the experience for the end-user is a secondary thought.

So, while on face value, helping Activison smash those sales records may seem a plus point in the industry’s favour at this point in time, in my mind we’ve only achieved in ensuring more lazily re-skinned Call of Duty, more copycat FPS’s and further stagnation for years to come. The saddest part? For a hefty portion of those who have invested into Black Ops, that’ll probably be enough. Not for me though, give me a nudge when the series offers something new.