Gearbox frontman Randy Pitchford has been quick to talk up a potential Borderlands outing for PS Vita, but it appears that the series will make its way to iOS first in Borderlands Legends.

The game, not yet officially outed by Gearbox themselves, has been spotted in an advert gracing the electronic pages of the Borderlands 2 Digital Strategy Guide, with a screenshot of corroborating evidence posted on the developer’s official forums by member ‘Ownzilla’.

The advert details how players will be able to play as one of the original quartet and take out ‘waves of enemies’ while levelling up, unlocking abilities and purchasing new weapons. Sounds like Borderlands thus far then. It promises ‘thousands of weapons’, 36 unique powers, and more interestingly, randomly generated missions and a ‘strategic cover system’. 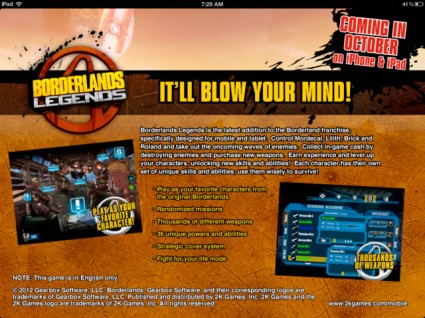 Could the image be fake? Possibly, with no peep from Gearbox, but it would seem a little cavalier to choose those particular forums to post the offending image.

With the ad declaring an October release, we won’t have to wait long to find out…