Last month, Andy K and I descended on Central London. Along with numerous others from the world of video-game journalism, we were invited by Ubisoft UK to have a look at some of their upcoming titles. One of the games on display was the long awaited Driver: San Francisco, the sixth title in a somewhat mixed franchise, that has both scaled the heights and suffered the lows since its PS1 debut back in 1999.

Whilst there we got to play one of the multiplayer modes, ‘Tag’, and also have a look at a few single player missions along with the city itself, in the free roam mode. Now the demo is available to download from the Xbox Live Marketplace, and I have been behind the wheel with detective John Tanner again to see how this title compares to its predecessors. In this article I will be taking into consideration both the demo, and the additional content we saw in our hands-on preview last month.

The demo itself includes three single-player missions that introduce you to the big new feature, ‘shifting’, while letting you get behind the wheel of a few different vehicles to see how each one handles.

The first mission is ‘Prove It’, which has you trying to prove to your partner Tobias Jones that you can, in fact, shift into the body of other motorists. To do this, you shift into the vehicle of a particularly annoying driver, and perform some outrageous manoeuvres. These include jumping off the back of a car transporter, deliberately ramming a police car and then escaping, and finally attaching yourself to the back of a tow truck, all to convince your partner that you can take control. In between each event you shift back to Tanner, for a bit of dialogue that lets you know if you’ve convinced him yet, and then off you go.

Shifting is performed by tapping the A button and then using the left stick to navigate to the target vehicle, before pressing A again to enter that vehicle. It is an extremely easy task to perform, if a little weird at first.

The second mission, ‘Team Colours’, has you taking over the bodies of not one, but two street racers in a four-car race. The target is to get the two cars in first and second by switching between them, and trying to outperform or simply ram (LB) your opponents. The course takes you across the city through twenty gates, and introduces the ‘Rapid Shift’ movement. This is performed with a press of the RB button, and forces you to shift between the two target drivers, without having to move the reticule over the vehicle. 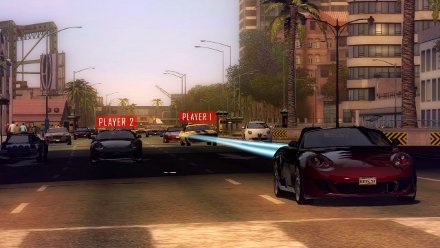 All vehicles are lovingly re-created...

The third mission on offer is called ‘Escapist’, and has you take control over Jericho’s (one of your arch-enemies) crew. The driver is a guy named Ordell, and Tanner is trying to get Ordell up the ranks of Jericho’s organisation, in order to put the criminal behind bars for good. This mission has you initially getting to a target destination in a fairly strict time limit, where you are instantly attacked by a mass of squad cars. You need to escape the cops in another set time limit, by getting outside their range for ten seconds.

Once done you then have to take your passenger to a drop off point, again within a time limit, where more cops are waiting (I don’t trust that guy already). The mission ends here with a cut-scene of you getting away from the cops again.

As demos go it’s fairly short lived, as none of the missions are particularly big or difficult to master. You are limited to specific vehicles, and you only get a very short look at the shift feature. This is only done over a short distance as well, so you won’t see the true power of what it might bring to the game from this demo.

The additional hands-on we’ve had of the single player allowed a bit more freedom driving around the city of San Francisco, and simply moving into an open mission allows you to play it. I played one more single-player mission last month that involved disarming bombs from under lorries, and required you to manoeuvre your chosen vehicle under the lorry between the front and back wheels, and then hold that position for a few seconds, to disable the bomb.

I have to be honest and say that it was a bit more enjoyable than any of the missions in the demo, and also required a bit more skill. Add to this the fact that you could freely shift into any car to perform the job, which allowed you to get a good feeling of how different cars behaved. 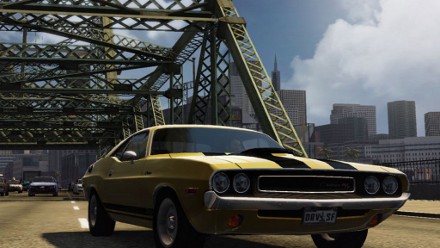 Is this the most iconic car in video game history?

The Tag multiplayer mode we played last month also gave us a good idea of how different cars would behave, in a game mode that promises to offer something a little different to the online community. Tag is a bit like capture the flag, except there is just one flag (trophy in this case), and it’s a free-for-all to get it.

The idea is that you grab the trophy by bumping the car that holds it, and then you have to keep away from the other contestants. While you are pursuing you can shift to your heart’s content, which is a good way of making sure you don’t find yourself lost on the other side of the map, as you simply shift into a car near the centre of the action. As soon as you grab the trophy, shifting is disabled for you; you have to trust your driving skills, and the car you are in, to get away.

Aesthetically the game is shaping up well; visually it looks very good, with the main characters extremely detailed in the cut-scenes, and also very well animated. Cars also look incredibly well created, and pedestrians realistically walk the streets of San Francisco minding their own business. That is, at least, until you come power sliding around a corner, up the curb, and bowl them over. The voice acting sounds pretty good from the brief bits I’ve seen, both in the demo and in a pretty noisy warehouse. The cars, as you might expect, sound as good as any driving sim I’ve played recently.

My biggest question mark with Driver: San Francisco that remains is how the cars handle. As much as I appreciate that the style of the game is inspired by car chase movies, with the cars designed to power slide around corners at top speed in true cinematic glory, I am not convinced that it makes for a good game. In the missions where you need to escape the police, it is made more difficult by the fact that you can’t get round the corners quickly. Instead you will go sideways, or worse, backwards, allowing any momentum you have built up to disappear. Most of the time, the best option is to find a long straight and then use the boost option to put distance between you and them, rather than trying to evade them with picking a decent route through the back streets.

This seems a bit of a shame, as Driver: San Francisco promises a truly enormous game world with the potential for hours of entertainment, across twenty single-player missions and nineteen multiplayer modes. We’ll find out how well this is realised when it releases on the 2nd September.