There are times when I feel that it’s healthy for all types of gamers to throw away any kind of pomposity or preconceptions they have about certain types of games and have a bit of brainless, no-strings attached  fun. It’s the reason why I loved Army of Two with its “Press A to high five” moments, why I sat through two hours of Transformers 2 and managed to enjoy myself without  having to imagine how much better my life would be if Megan Fox was my star crossed lover (although it did cross my mind, I’m only human), and it’s a concept that I’m very much into at the moment. Sure, I’m still more likely to get really taken in by a deep, innovative game or something with an epic story to get my teeth stuck into, but I also find myself being filled with a damn near insatiable hunger for some old fashioned carnage.

I just plain want to blow stuff up, so it’s a good thing that the Just Cause 2 demo has decided to parachute onto Xbox Live, akimbo magnums ready to cause some damage. Just Cause certainly pushed the boundaries of just how many epic moves and explosions you could cram into one game, so what could go wrong in the sequel to a game that existed only to sate the destructive desires of prospective anarchists like myself? Read on to find out…

Things start out in a horrifically cheesy tone, with the protagonist Rico Rodriguez a.k.a. Scorpio meeting with… hang on a second, Scorpio? Rico Rodriguez?  I knew that this game was never going to have a particularly engaging narrative, but what a lazy naming convention. Who else will be making an appearance I wonder? Rico’s young but plucky (and rocket launcher wielding) sidekick Tito? Or perhaps a mysterious Italian informant who goes by the name of Flavio di Pizza, who it turns out is a bad guy of course because, well, he’s European and they’re always evil. Especially if they wear a suit, which I imagine Flavio will. Anyway, Scorpio (sigh) is meeting with the leader of The Reapers, no not those ones, a group of rebel mercenaries who look to overthrow the self serving dictator Baby Papay, who rules the island of Panau with an iron fist since his father popped his clogs under mysterious circumstances. Well I say mysterious, Papay clearly killed him.

This introduction is mercifully brief however and after being introduced to our extremely unlikable but generously equipped protagonist we’re dropped right into the action with only one objective, turn the entire island into a flaming mass. The lifeblood of Just Cause 2 is chaos, which is accrued by killing the occupying forces, destroying property and also taking over government strongholds such as radio towers which will then be occupied by Reaper forces. There seems to be a decent level of variety in the different strongholds, and based on the size of the map there’s certainly no shortage of them. I found myself being a bit frustrated however as there aren’t any visual cues that point you in the direction of which structures need to be destroyed or what items need to be picked up within each stronghold, which resulted in me wasting a sizeable chunk of the demo’s half hour playtime.

I decided that my first target would be a small village at the bottom of the hill I was standing atop. As I looked down on the settlement I was about to reduce to a cinder I couldn’t help but admire how lush the island looks. The draw distance seems limitless and the detail is impressive, the former of which is extremely useful when planning an attack. Since I hadn’t built up any heat at this point I could have walked straight into the town without too much interference from the local militia, but where’s the fun in that? So my approach involved off-roading my jeep down the hill towards the village towards the petrol station on the outskirts and once I had gained a decent bit of momentum I jumped onto the roof of the car using the very well executed stunt driving controls. As my vehicle hurtled towards the very, very explosive station I was unloading both of my submachine guns at anything that moved before jumping off at the last minute to see the entire thing go up in flames. It was pretty damn epic. It also gave me the opportunity to see just how well the Avalanche engine handles destruction, which it does admirably and seems to particularly set up some nice chain reactions. 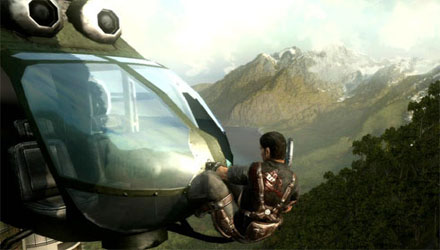 Any chance of a lift mate?

After my outrageously stylish entrance however it all got a bit stale. The core gunplay is pretty boring with the enemy AI being extremely simplistic. Every location is littered with destructible environments and explosive barrels which helps to keep things exciting, but there really isn’t enough depth to the shoot em’ up element of the game to keep me interested for an extended period of time. Scorpio’s grappling hook can also be used as a weapon ala Bionic Commando, but it seems like the only move he is capable of is throwing them through the air which only has the desired effect if they happen to be standing at the edge of a cliff. Melee attacks are equally uninspiring and seem to be as powerful as whipping the enemies with a wet fern, with would be fair enough if enemies could be annoyed to death but doesn’t really have a place in Just Cause 2. Enemies are also able to absorb a hail of bullets before going down unless you score a headshot, which is nigh on impossible unless you use the zoom function, slowing yourself to a crawl in the process. Basically, don’t expect to win a fight through finesse in Just Cause 2, shock and awe is the only effective way to see you through the revolution.

After “reclaiming” a couple of strongholds and causing an acceptable level of carnage in the name of the Reapers, a Faction Mission is unlocked which seem to be essentially the same as the stronghold assaults, except much bigger and with more things to blow up. A different approach was required this time in order to get myself over the vast wall of the complex I was trying to infiltrate, so I decided that Scorpio’s slingshot move would do the trick. The slingshot makes use of both his grappling hook and parachute, launching him in the air before deploying the parachute to control his descent. It’s a very quick way of getting around the island, but doesn’t allow for much of a controlled entrance. Pushing forward to gain some speed results in the control of the parachute resembling a wonky unicycle, while pulling back somehow manages to levitate you even further in the air. The view from that high in the air is undoubtedly remarkable, just don’t expect to hit your landing zone, or anything within a few hundred yards of it for that matter.

Just Cause 2 pushes a lot of the right buttons and when you run through a list of the ingredients it should result in a winning concoction; high octane action, breathtaking stunts, massively destructive environments and a well accomplished sandbox element. However, it just doesn’t seem to come together well and falls apart when it comes to the more basic elements, with the gunplay and grappling hook mechanics in dire need of an overhaul. The general tone and pace of the game reminds me a fair bit of the film Desperado which can only be a good thing, but it’s going to need to do a lot better if it wants to really break out of the pack, and not be remembered in the same light as that weird bit where Enrique Iglesias sets everyone on fire with a guitar case.