It’s not like Valve to push out a sequel to a game as quickly as they have done with Left 4 Dead; all you need to do is look at the six year wait between Half Life 1 and 2 to realise that. However having played the original L4D extensively, I can tell you there is  reason for you to give this game a chance if you find yourself still on the fence. It’s very clear to me that Valve still have a lot to give to this franchise, and there are some big changes and subtle differences in Left 4 Dead 2 that will surprise and amaze you.

After watching the epic opening cinematic, we cut to a newly designed title screen which is now scrolled through horizontally instead of vertically. For now, all we can play are the first two levels of the Parish Campaign, which can be played online or offline, single player or split screen.

The first thing you’ll notice about Parish is that it’s set in broad daylight, whereas every campaign in L4D was set at night. However, just because you can see the enemy coming doesn’t make the struggle any less nerve-racking. The area is quite open and vastly populated by hordes of the undead. Even on the normal difficulty setting I found myself fighting for my life in some of the more tense situations. I know L4D could get crazy, but if this demo is any indication, you ain’t seen nothing yet! 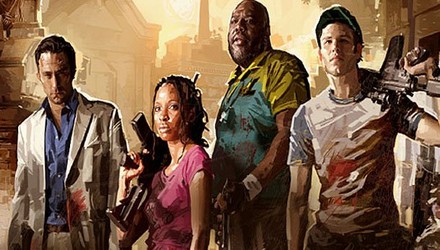 Another big change in L4D2 is the addition of new special infected. My first confrontation was against a SWAT zombie in full body armour and visored helmet. I came up against quite a few of these in the demo. From the front, they are very difficult to kill because, as well as being well padded up, they’re also pretty evasive. Attack them from behind though and they can be handled quickly.

The Jockeys are going to be a challenge when they come at you in groups. In my eyes, they are the bastard child of L4D’s Hunter and the face-huggers in Alien. When they get on your face, you’re either going to have to point the analog in the opposite direction from where you’re being pulled, or wait for another survivor to shoot or punt it off. Jockeys, while they may seem harmless, can be really good at isolating you from the rest of the survivors if you let them.

The Charger is a deadly foe. Unlike the Jockey who gallops toward you at a moderate pace, the Charger throws himself in your direction and can knock you and your team mates away from each other. Once he’s done that, he can then use his secondary attack and piledrive a survivor he gets his claws on, incapacitating them quickly. Like the Tank, the Charger can take a pounding, but will go down faster than his counterpart.

As for the Spitter, watch out for the acid as it will eat through your health supply rapidly. In many respects the Spitter is most similar to the Boomer in L4D, except the contents of her stomach are going to burn you instead of blinding you. As part of a team in Vs Mode, the Spitter is going to be at her strongest when working in tandem with the abilities of the other Special Infected.

Of course, it wouldn’t be L4D without your Tank, Hunter and Smoker combinations. There’s even a surprise for the Boomer fans as we see the debut of the female version, complete with breasts! Also, when bumping into a walking Witch for the very first time, you’re liable to feel a shiver up the spine. 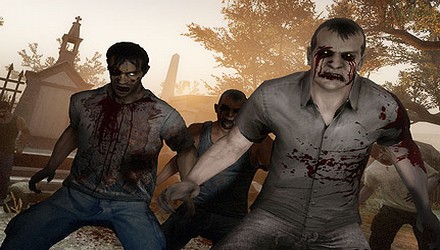 Aside from the infected, another big change in L4D2 are the melee weapons. In the demo I only got hands on time with the baton, the frying pan, the guitar and machete. While I enjoyed using them all to great effect, the machete most specifically, one thing I was hoping for was some sort of indicator as to the condition of your weapon after extensive use, or whether picking up one weapon is an improvement in attack ability over another. I feel Valve could have taken some notes from Condemned on that front. The weapons do vary in style and use; some are faster than others, while others are obviously more powerful, but it’s down to the player to discover which is better suited to each scenario. For example, the machete will tear up a zombie quite quickly in one or two strokes though it is slow to recharge, whereas a baton is better for knocking back infected instead of going for the deathblow and is faster to recharge.

You’ll also notice that upon picking up a melee weapon it will replace your pistol. This emphasizes a stronger tactical undercurrent to L4D2 compared to the original and will seriously make you consider your choices before going into the heat of battle.

Some other big changes include the defibrillator, which alternates with the health pack in your inventory and can be used to rejuvenate dead survivors, starting them at half health. Also, the Boomer bile grenade, which joins the Pipe Bomb and Molotov Cocktail, clusters zombies together in a huddle, making them easier to kill. When thrown at an enemy such as the Tank, the Boomer bile also attracts zombies to attack that target. To swap with the pain pills, you can now pick up Adrenaline, which, when injected, heightens your reflexes and lets you move around a lot faster for a limited time.

Overall, I enjoyed my time with the demo and have noticed there is a much more tactical undertone to L4D2 which makes for an even better experience than before. There are a lot of choices to be made, and everyone in a team is going to play a pivotal role in the survival of the entire unit. As far as I’m concerned, the demo has only heightened my anticipation for the zombie slaughter on November 17th and I can’t wait to bring a chainsaw to the party!