Often talked down by football fans as a game for thugs, rugby is in fact a sport that requires a great deal of skill and an incredible amount of physical strength and fitness. However, unlike many other sports, its transition from the fields of play to console has never been particularly smooth. With one or two exceptions, rugby games have been pretty average at best, and due to the smaller numbers of worldwide followers have often gone under the radar.

At the start of September the World of Rugby will descend on New Zealand, arguably the spiritual home of the game, for the seventh World Cup tournament. With it comes not one, but two new rugby video-games. Rugby World Cup 2011 has got a few fans of the sport excited about finally being able to enjoy it in digital form, so I have been playing the demo to see if that excitement is justified.

As soon as the demo loads up, the polish of the menus and all-round presentation of the game will impress you immediately. Although you cannot navigate through any of these in the demo, the setup looks every bit as professional as other major sports franchises, which can only be a good thing.

The demo allows you one half of a single match between England and South Africa, in New Zealand’s Eden Park stadium, Auckland. You can choose your side but cannot alter the line-up or set any tactics; this demo is purely about getting an idea of the gameplay mechanics and the fundamentals, like graphics and sound.

Speaking of which, players come out and limber-up on pitch amid a very TV-like presentation. The teams are announced and displayed graphically in a way which would make the big stations proud, but despite boasting full licences of both England and South Africa (along with France, Argentina, Wales, Ireland Scotland and more), the player likenesses are not particularly great. To put it in perspective, I’d say that RWC:2011 is more PES than FIFA for player representation. 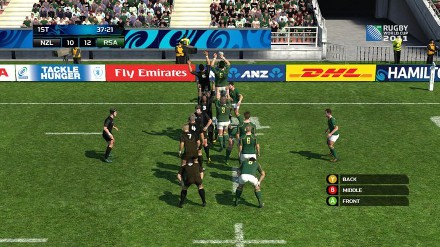 Where's Rory Delap when you need him?

To the action, then! On my initial play I felt that kicking, especially from hand, was a bit difficult to judge. When you press the kick button, A, a directional arrow appears, and you need to move this while you’re powering up the kick. When you release the button, the ball will go in the direction the arrow points. At set plays, such as kick off and penalties, you can move the arrow before pressing the kick button. This makes things a little easier; you can judge these quite well in no time, but so far I have found drop goals and grubber kicks (B and Y respectively) quite difficult to master.

This is no big issue though, as purists will tell you the game should be played with ball in hand, so that’s what I have taken to doing. Passing is assigned to the shoulder buttons, with RB for a right pass and LB a left pass. Here comes the worrying part, however: within two matches I have managed to get to a point where I can easily win by 14 points (two converted tries), without too much effort.

Passing is smooth and fluent and player animations look good, but I have found that you seem to break tackles quite easily, making scoring a bit too simplistic at times. When you are tackled you can press the A button to release the ball, or ruck by tapping A once the play has broken down. Again, the game flows through these set pieces well, and by default an offside line is shown when you are without possession, so you don’t encroach before the ball is back in play. 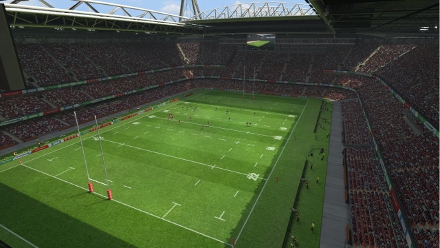 Scrums and lineouts are also well reproduced; the latter gives you an option of front, middle or back, and your hooker will throw the ball to the chosen section. The players jump automatically, and a maul usually follows, which you can add players to by pressing A. As with the scrums, you can try driving forward by simply pushing the left stick. I have a slight issue with the game balance here, as winning your own lineout and scrum is very easy (I haven’t failed yet), while winning one against you seems almost impossible.

Commentary sounds okay, but as with all sports games you’ll start hearing the repeats sooner rather than later. The crowd noises seem good enough at this stage. In the menus, the infamous “World in Union” song is played.

Overall I think there is enough here to suggest we may be on to a winner, finally, in terms of a rugby game on home console. Furthermore, the game will have a two week advantage over the rival “Jonah Lomu Rugby Challenge”, not to mention its official World Cup licensing, when it is released on August 26th. Let’s hope it lives up to the promise.