I was fortunate enough to attend the Eurogamer Expo this year and had the chance to try some of the new games we’ll be playing this Christmas and on into 2011. Donkey Kong Country Returns was one I was extremely eager to get my hands on. Has it been worth the wait? Read on…

One of the biggest surprises at this years E3 had to be the announcement of a new Donkey Kong Country game. During Nintendo’s whirlwind campaign to appease the hardcore gaming fanbase they’ve been alleged to alienate, they demonstrated the further adventures of Diddy and Donkey in a formula familiar to anyone who’s played the original games back in 1996. The game is essentially played from a 2.5D perspective, the original side-scrolling fanfare you will remember, bananas, barrels and crocs but this time you will find the environment behind and around the Kongs will be used as part of the game and brought closer to the third dimension. Reminiscent of New Super Mario Brothers released last year, this is a platform foray that also openly supports multiplayer.

I played this co-operatively with Laurie_J and right from the beginning we found that it adds so much more to the game than you would have by playing solo. Donkey and Diddy each have abilities that are needed to co-operatively solve every puzzle and evade every obstacle. Don’t worry though, even if you don’t have a co-op buddy, you’ll still have an A.I. playing as your partner. 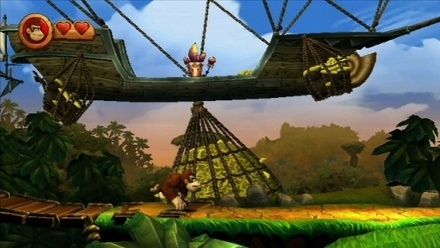 For example, in order to cross some gaps, Diddy will need to be on Donkey’s back. When DK jumps, Diddy acts as a propeller so you can hover over the gap and reach the other side safe and sound. While Diddy is more agile, Donkey is obviously the more powerful of the two monkeys and will be capable of some attacks that would probably kill Diddy if he even tried to attempt them. So each character balances each other out very well and playing as either Donkey or Diddy will serve as a distinct advantage to either player, ensuring that no matter which monkey you select, you still have an important part to play.

The game is played with the nun-chuck and remote, with the nun-chuck moving Donkey or Diddy, and the remote being used for jumping, waggling and attacking. There are certain items in the world Donkey will need to trash and this is accomplished by waggling your remote like a loon. It doesn’t really replicate the action that Donkey is pounding the life out of a crate with two hands at one time but it works.

Strangely, the graphics aren’t all that different. A very similar (but obviously advanced) engine is clearly powering DKCR, which is either a testament to how powerful the SNES chip actually was back in 96, or Nintendo showing their homage to retro gaming, or maybe it’s just that the Wii really doesn’t have much more horsepower than the SNES of old. You can take your pick with that one.

In an EG line-up essentially dominated by FPS games, this was a breath of fresh air and a beautiful reminder of just how brilliant the Donkey Kong Country games were on the SNES. This is a very timely release for the Wii that is sure to be a hit this Christmas. I came away from the demo wanting to play more and I would thoroughly encourage anyone who grew up playing Donkey Kong to give this one a look later this year!