I am in no way a fan of the Assassin’s Creed series. I’d say that the franchise has, at best, a 50% hit-rate with myself. Assassin’s Creed 3 being a real low point for me last year. Not everyone agrees with this, but I thought knowing how I feel about the previous Assassin’s Creed games may make what I’m about to say a little more powerful.

After my time with a pre-release build whilst at this year’s Eurogamer Expo, I am excited for Assassin’s Creed 4. Here’s why.

The first thing that struck me whilst playing the PS4 version of the game was the fact it looked great. I know it’s hardly the most convincing of arguments, but when Assassin’s Creed 3 chugged along like an asthmatic donkey, the fact this is no longer the case is a cause for celebration. Will it still be the case on the current-gen systems? Who knows.

Technical elements aside, the game can only look as good as the world will allow. Luckily, the locations are another highlight. For the first time, it seems, that an Assassin’s Creed game is aiming to give us a truly open-world experience. Previous titles would pen you into areas that, whilst hardly making you claustrophobic, wouldn’t leave you with a sense of awe at their scale. Not the case anymore as Assassin’s Creed 4 looks to contain sprawling oceans littered with shipwrecks to plunder, coastal forts to attack and islands to explore. 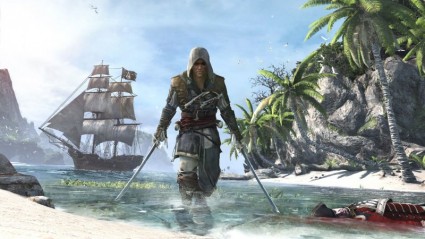 The world looks really inviting. Minus the blood and bodies, mind.

Whilst aboard your ship you can pull out a spyglass and set sail for whatever’s in sight. It’s a really liberating experience and sailing your ship has a real weight to it that makes the whole experience more engaging than it has any right to be. Whilst en-route I decide to engage in a little bit of naval combat. Extremely quick-paced, battles are exciting and a visual treat. The fact that ships can ‘join’ your fleet or be stripped of their worth means you have a choice to make after every battle.

After I sailed close to an island I wanted to explore, I jumped off the side of the ship and into the beautifully rendered caribbean sea. I almost forgot I was inside a somewhat sweaty and smelly Earls Court. Almost.

Whilst on land, a large number of icons came to my attention through the mini-map. Should I talk to the barkeep and see what info he had? Gather an assassination mission? Climb a vantage point, loot some gold search a wreck – so much to do and so little time. 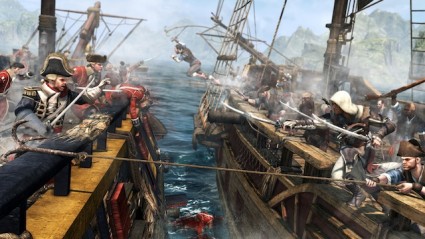 I won’t bore you with the details of what I did. The short version is that some drunkards took offence at my presence, a bar-brawl on the beach left 4 people unconscious and I took on a mission to assassinate someone. Someone we’ll presume who had it coming.

The reason why the combat, climbing and general gameplay of Black Flag isn’t worth talking about is because it’s the same. To me, this is no bad thing. You see, my issue has never been with the way the Assassin’s Creed games have played, but instead with the way I found their missions to be nothing but busy work that offer no reward and no sense of achievement. 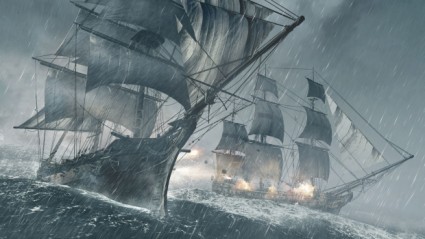 Black Flag, from what I could gather with my short time with the game, has bucked this trend. You see, money finally has a purpose. You’ll want to improve your crew with your hard-earned money. You’ll want to upgrade your ship’s weapons by taking out more forts. You’ll want to take on new missions and explore the world because the missions are engaging and the world’s gorgeous. Unlike in Assassin’s Creed 3 where a snowy waste-land and a drab, burnt-out New York were the location of many a ‘pick these things up’ side-quest.

As I mentioned, the gameplay’s the same but the design and world appears to be that much better. It’s what’s always been missing from the Assassin’s Creed series and I can’t wait to see if Black Flag’s early promise leads way to a legitimately rewarding and engaging title.

Also, it’s full of pirates and pirates are cool.