A few years back when Call of Duty 4 was released, there was a certain bonus level right towards the end of the game. The infamous “Mile High Club” put players aboard a hijacked air plane while they attempted to eliminate the group of terrorists responsible. What made it so different was the fact that it was timed and players had to be quick to finish the level.

This idea helped form the critically acclaimed Special Ops mode in Call of Duty: Modern Warfare 2, which was a deeply popular mode. Special Ops provided two players with a set of missions where working together was essential if you were to complete them. As expected, such was the success of those missions, Special Ops is also included in the upcoming Modern Warfare 3.

Special Ops has been modified to include some new features, but the latest Special Ops revelation comes in the form of a new mode. Those familiar with the likes of the Horde mode in Gears of War 3 are in for a treat as in this section of Special Ops, players must work as a team to get through multiple waves of enemies. This is not exactly a unique concept, but it still managed to impress as I played two of the included levels.

The first map took place in a war-torn section of a desolate city, placing me into the middle of a plaza, where we started our attempt at getting to the highest number of enemy waves possible. In all truth, this is the easiest map to get to grips with from the two that were available. The other map, set in a desert, was a tougher challenge and offered a higher numbers of targets to eliminate.

It’s to be expected, but early enemy waves don’t present much of a challenge, with difficulty being progressively ramped up, as each wave is completed. This is an appropriate solution that will help anyone new to this sort of game get settled in. On the flip side, only those with experience will be able to go beyond the much tougher enemy waves later on. It’s a balanced approach to making sure that this mode in Special Ops can be appreciated by any kind of player. 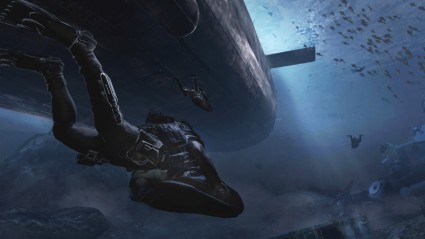 Economy sea travel has sunk to a new low.

Now, everyone knows that Call of Duty games are all about weapons and there is an impressive arsenal just waiting to be used in this mode. At the start of a game, each player will be presented with a default pistol and some other gear, like grenades. Throughout the first wave, players can take weapons and ammo from enemies killed in combat. At the end of each round, you can then visit various depots that are spread around the map, which gives you the opportunity to stock up on ammo, and even purchase new toys.

With successful progression to a new wave comes new depots. The new depots provide newer, more powerful weapons, such as machine guns, or more destructive forces in the form of Air Strikes. There is a serious amount of tools available to help wave progression and it also opens up the possibility to play in different ways. After all, when in a game session, each player is bound to deal with a situation differently. There are those who will go in guns blazing, while others will choose to be more strategic and take their time. The vast selection of tools on offer ensures that each player will be able to play in a manner that best suits a preferred play style.

Obviously, anything obtainable from the depots won’t be given out for free and that is where the currency system comes in. Each player will be rewarded with money based on their performance, so be sure to bag as many kills as you can before the end of the wave. It will only be possible to purchase better equipment with a lot of money. Thankfully, money earned can either be saved over the rounds or, if you’re not very thrifty, used without restrictions on more common equipment as you see fit. You can also give another player some of your money so that you can function as a team more effectively. 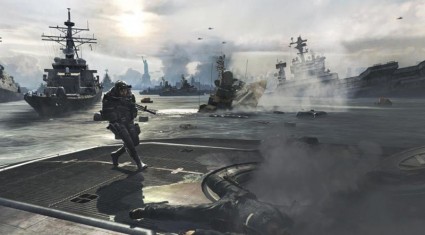 During this downtime, a timer is set in motion to ensure that there is plenty of time to get ready for the next wave. It’s possible for players to signal that they are ready by jumping, but the next wave will still go ahead when the timer runs out. Throughout the increasingly tougher waves, it becomes apparent that team work is essential. There is the danger that when one of the players is shot down that the other is too far away to attempt the reviving process. You see, a timer will appear whenever someone is shot down, and it is up to the remaining soldiers to attempt rescue before time runs out.

Not only that, but taking down enemies will also require cooperation due to the sheer number that will be appearing. Some of the enemies faced range from regular enemy soldiers, to helicopters equipped with powerful turret guns. The destructive Juggernaut makes a return too, and he still means business. This worthy foe won’t be taken down so easily, and could perhaps even rival the likes of the Terminator. It’s fortunate that maps are designed so that it’s possible to easily remember the layout and find the best path to take on enemy forces.

This new side to Special Ops proves to me that the developers are serious about improving the cooperative experience of Call of Duty. It seems like fans are in for a real treat in Special Ops, especially if there are any more surprises like this one…