The year was 2025, my squad was caught in a fire-fight. Pinned down by enemy troops it was looking grim. Out of nowhere, the rest of the platoon seemed to just parachute in above us, hitting the ground and unleashing hell with their guns and grenades. It was starting to look like we would win this fight. Suddenly I heard the sound of a bullet whizzing through the trees then it all went fuzzy,  and ‘to bleed-out press X’ popped up on my screen. I had died, but somehow I was able to fight on!

When I picked up the pad to have a play with MAG my first thought was, ‘these graphics look a bit ropey’. I have to say that after digging deeper, Zipper Interactive can be forgiven for this, as the bulk of the development has been concentrating on getting the gameplay right. When you are dealing with 256 players on the map at the same time, you have to be make sure that it’s going to work; making it look good is going to be an afterthought. Now, before all the PS3 fanboys pipe up and say I’m being prejudiced because it’s not on the Xbox: I am stating a fact, not slating the game.

When I got playing and was parachuted into the action, my initial impression of the game was laid to rest. This fast-paced MMOFPS (yes that’s what it is, seriously, I’m not making it up) may not look as good other games of its type (such as Call of Duty), but it is definitely far superior for several reasons. One thing that annoys me about these so-called realistic games is that there always seems to be a hidden barrier when it comes to the tree-lines and bushes. When approaching a tree for cover I always find it  annoying when you hit them like a brick wall; if you were in a firefight would you be stood in the open or hiding in the shrubbery?! It’s the second option, let’s face it. Thankfully Zipper have taken this into account. When you want to go hide in the trees, you can (obviously climbing a tree would be a little silly). 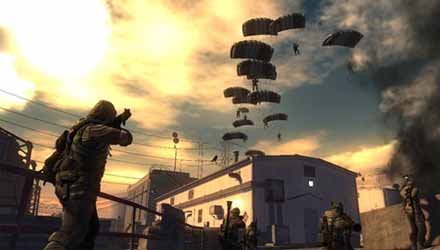 It's not quite Duck Hunt...

Another good thing about MAG is that your wounds don’t magically begin to heal after a short respite; instead you have to go find aid stations and get healed. Dying can be a long experience on the battlefield and bleeding to death due to the massive bullet hole in your stomach is never a pleasant thing. It’s all ok though (it’s not real for one thing), as when you are bleeding to death you can either take the opportunity to pray to whichever deity you choose or do what I did and bleed out and get back into the action.

When you re-spawn you get the opportunity to decide how you want to deploy (by air or land) and you also get the chance to change your weapons. You have to wait a set amount of time before re-spawning and this is because you’re always deployed in squads. This means that you always have company in a battle, making this more about cooperation than running off on your own. I have to say that playing without a headset was a little disappointing, as you really do have to keep in communication with the people on your team to effectively take on the enemy.

Overall, I have to put my hand on my heart and say that I love this game! I would buy a PS3 just to play it, and would probably spend hours of my life sat in a warzone (on my sofa). In the short time that I spent with it I can already see the appeal; I was in a war and I wasn’t fighting a computer; I was in combat against real people around the world. It’s an intense, unpredictable experience with a fantastic atmosphere. If you play it right, you’re going to have a team battle the likes of which you have never seen before. I had no expectations going in, and now I have big expectations for the full release; this will surely be a must buy for PS3 owners.