As part of the MCM Expo I got to have a go on a number of unreleased games. This game went one step further, as it’s on an unreleased console. How lucky am I?

The short answer is ‘yes’, the longer answer is ‘yes in short bursts and considering it didn’t cost me £40’. With this being a very arcadey affair, I can’t help but get the feeling that if I were to pay full RRP for a new Wii U game (which I’m assuming will be around the £40 mark) I’d feel a little hard done by.

I’m aware that this isn’t likely to be the final version, and that the stand was set-up in such a way to offer a quick burst of TTT action but I had a rummage through the menus to see what else lies in the game. Whilst I did see a ‘campaign’ option, I would be hugely surprised if this was anything more than a series of missions based on the multiplayer aspect that seems to be TTT’s main selling point. 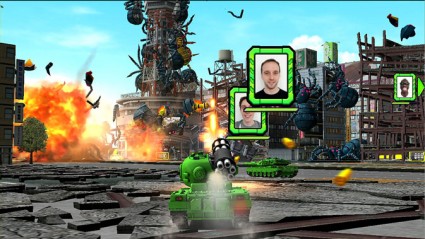 The controls are extremely simple. Move with the left analogue stick and then shoot with the A button. Aiming takes care of itself, ensuring your bullets hit as long as you’re pointing in the general direction of the enemy.

Matches are often quick, brutal and colourful. It boils down to a race for the power-ups that get dropped throughout the game and these are essential to winning the match as the power of the weapons being dropped increases towards the end of the battle. You’ll also be running out of bullets a lot, so keeping an eye out for collectibles is a must.

Using what the Wii U has is done via the controller’s built-in camera, as you’ll take a picture of yourself, complete with a silly frame, which then appears above your tank throughout the game. A neat little touch that makes shooting friends that little bit sweeter. 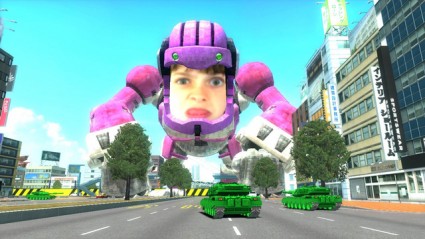 To save your eyes, I've used a screenshot NOT containing my face.

What’s also pretty fun is taking charge of a giant mechanical gorilla that has your face plastered on it. One of the modes sees you taking charge of what is normally your enemy, with your aim being to smash all of your tank driving friends. Playing as the monster means you’ll have your attention focused to the Wii U controller’s screen, but it essentially plays the same. You have no collectibles to worry about, though your attacks naturally ‘level up’ through the time of the match. Playing as ‘mech-gorilla’, the name I’ve given him, I could grab tanks, sit on tanks and swipe at tanks with the aim being to stay alive for the allotted time.

It’s clear that TTT has multi-player as its main selling point, which is fun enough in short bursts, but it seems a bit too simplistic. There’s no real strategy to the action and the Wii U features seem like nothing more than gimmicks that could be achieved by using the Kinect’s camera or the Playstation Eye’s capabilities. I’ll be surprised if this day one launch title for the Wii U ends up being a system-seller. Which is kind of what the Wii U needs.