Tekken has been around for so many years, yet the team still manages to come up with new ideas to make it fresh and relevant. The first Tekken Tag Tournament introduced some interesting concepts to the series. Does its sequel, Tekken Tag Tournament 2, have anything worthy to add? I had the opportunity to preview it and find out for myself.

The tag in the title is a bit of a give away, but it’s one of the key elements in this latest Tekken release. Obviously, being able to play with a second character is not new to this title. However, there have been a couple of new features added to make the most of it.

One of the new moves is the aggressive Tag Assault. This move allows characters to simultaneously attack an opponent at the same time. It’s not exactly easy to pull it off, since it requires doing a certain combo, but anyone that manages to pull off Tag assault gets awarded with a highly damaging team attack.

Another new move is the extremely helpful Tag Crash. We have all been in situations where the opponent is literally wiping the floor with our favourite Tekken characters. Now it’s possible to try to stop such massacres quickly, all thanks to Tag Crash. It literally lets the player swap character when one is laying down and being hit. It’s an interesting idea that makes fights fairer, because it means opponents can’t take full advantage of downed characters.

Other new moves include Tag Grapple, where both characters grapple the opponent at the same time. It’s certainly interesting to see both characters work together with style. Most of the new Tag moves are easy to use, once the player learns how to activate them. This makes it more appealing, since it means fights aren’t solely about either pure skill or mashing buttons. Some of these new moves, such as Tag Crash, ensure that anyone with reasonable fighting skills can get out of tricky situations. 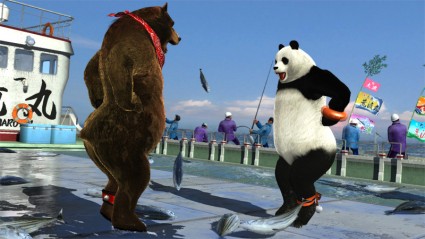 One of the major factors in a sequel to a fighting video-game is how the characters play. Tekken Tag Tournament 2 follows this rule with some character adjustments. Some of them play better and even have new moves, which are easy to spot when using them in fights. Having tried most of the currently announced character rooster, it’s safe to say that it is very balanced. Stronger character are slower, and vice versa.

The two returning characters revealed provide some interesting new tactics in this Tekken release. Angel is a powerful character that relies on her agile physique to deliver swift attacks. In contrast she is one of the weaker characters, in terms of how much damage she can handle. Kunimitsu is a deadly character that will make use of some powerful attacks. There’s a few more characters that haven’t been revealed yet, but the character rooster is already full of fan favourites.

The simple nature of Tekken makes playing with two characters just as easy as playing with one. Swapping character is just one button press away, although the opponent can still deal some damage when the characters are swapping. The round is over once one character gets defeated, so swapping them is essential. There’s many combos for each character, and using them merely requires pressing certain buttons in the right order. This and the various tag moves make for enjoyable fights.

Anyone struggling can make use of the Fight Lab tutorial section. This section of Tekken Tag Tournament 2 provides players with training. Some of the moves aren’t exactly easy to replicate, and so the training will certainly come in handy. 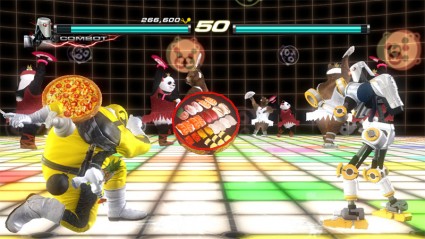 No one talks about Fight Lab...

It’s also possible to play as one character, like in traditional fighting video-games. The only difference is that the one character’s fighting abilities are evenly matched if the player is going up against two characters.

Arguably one of the best features in Tekken Tag Tournament 2 is the ability to have four players fighting together. It’s thoroughly enjoyable to partner up with another human player, especially given how simple it is to tag out.

As usual, the stages in Tekken Tag Tournament 2 are a pleasure to fight in. One particular stage aboard a fishing boat comes to mind, with the bizarre concept of fighting in an arena where fisherman throw fish at the fighters. There’s a huge selection of stages to pick from, each with their own unique themes. It shows just how popular Tekken is when there is even a Snoop Dogg inspired stage. Character models have been improved when compared to other recent Tekken releases. They now look slightly more realistic, with more attention given to smaller details.

This is certainly an interesting take on the classic that is Tekken. Deep down it’s just like its forebears, but with lots of fun elements that will surely attract new players. Tekken Tag Tournament 2 already has potential for being a worthy sequel to the original. It might even have potential for being one of the best fighters of the year.