Tomb Raider is one of those game franchises that everyone knows and anyone who has ever played video games has played at some point or another. So much so that Lara Croft has actually become an icon almost at the same level as Sonic or Mario down the years. It therefore seemed a strange decision when Square Enix announced the series was getting a reboot that would steer us away from the Lara we’ve come to know and love over the past fifteen years into a very different character.

At this year’s Eurogamer Expo we have been privy to both a playable demo and a developer session to see and hear a little more about the new direction the franchise is taking and whether this will ultimately lead to a hit or miss for Miss Croft.

With the developer session not until Sunday, I decided to tackle the demo beforehand and have to admit I was more than a little disappointed with it. The demo on offer was very short and is right at the beginning of the game when our heroine is at her most feeble (and annoying). The demo starts with Lara stranded on a mountain side after becoming shipwrecked and separated from her companions. You take a short journey across the mountains to try and locate the missing members of your party, while picking up a few survival tips along the way.

The first obstacle is a balanced walk across a fallen tree followed by a fairly simple jump, and after another short walk Lara looks out to see a plane conveniently hanging to form a bridge across a cavern. In “I am Alive” style you then climb up and across the plane before dropping to the ground and watching the first of many little cut-scenes.

Another short walk and a straightforward obstacle, this one to teach you how to climb a flat surface, and you find some signs of life and a backpack that would appear to belong to one of your friends containing a box of matches and a two-way radio. A short cut-scene follows as Lara tries to contact her pals on the radio, and then as the rain comes belting down you need to find an area to set up camp. Following the mountain round in the only direction possible you locate a convenient overhang and proceed to light a fire (courtesy of a short cut-scene) to warm yourself up.

Cut to the next day and some friendlier weather conditions, and you need to direct Lara down from her makeshift camp to find a corpse swinging from a tree. The corpse still holds its old bow and there are some arrows at the foot of the tree, giving our heroine a way to get some food. You need to climb the tree and collect the bow by leaning out from a branch and grabbing the bow as it swings towards you in what is a rare action that you perform yourself by leaning with the left stick. Having grabbed the bow you then need to go off and hunt for food. 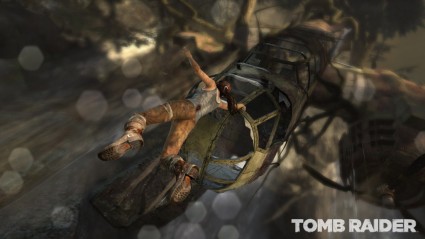 Fortunately, just around the next corner are a couple of deer and some more arrows, and you’ll need to kill one of these animals to proceed. You can aim and fire with the trigger buttons in classic shooter style and the deer will take a couple of arrows to fell. Once hit they don’t hang about, so this section took a few minutes as I chased the wounded animal around trying to land the fatal shot. When that’s done you walk up to your kill and another cut-scene takes over as Lara takes the meat off the animal. You then head back to your camp before another cut-scene closes the demo.

Before you leave the game entirely there is a short video that shows you some sections of the full game. These suggest some more traditional action sequences were to come, but I was already somewhat underwhelmed at this point. Lara comes across as incredibly weak and vulnerable, regularly telling herself that she “can do this”. While I appreciate that this game is set before all the others and is designed to tell the story of how Lara became the great adventurer we know her to be, it really is a shock to the system to see the character like this and I couldn’t help but wonder if they’d taken it too far.

However, my biggest issue with this demo was the fact that even though it’s clearly just a training level, so much of the game is taken out of your control with cut-scenes it’s hard to see where the depth of gameplay will come from. Fortunately Sunday’s Developer session allayed some of the fears. 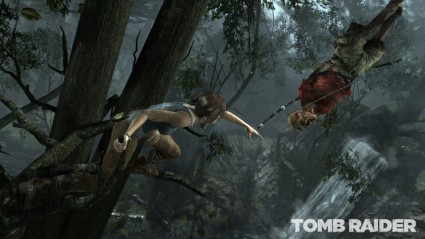 You can do this, Lara

The session was a longer, deeper walkthrough that starts with the section from the show floor. The first initial point is a look at how the leveling-up system will work using the Base Camp system. This turns each camp you set up into a kind of shop where you can spend the XP you have earned to that point. We were told that once Base Camps have been unlocked a quick travel system will unlock between them. This will allow you to revisit areas later when more skills have been unlocked, potentially allowing you to pick up items and see areas you couldn’t beforehand.

Unfortunately we weren’t given any detail on the separate skill trees, but the Base Camps certainly come across as a well thought-out system that keeps the atmosphere of the game flowing. We also saw a look at the collectible Salvage which will double up as a currency to upgrade weapons and items.

The walkthrough section after killing the deer takes Lara through a cave environment, and sees her fighting off wild animals on the mountainside as well as coming across some rather unfriendly locals who take her and her companions captive. This then allowed us to see a few more action sequences which included a point towards some stealth and cover-based gameplay as Lara tries to escape. There was also a glimpse of the puzzle style which we were later told would very much follow a real-life theme, such as burning cloth to open up new areas or access items.

Visually the game is looking very good with some diversity even on this early level, and the use of sound effects and background music is very atmospheric. It seemed clear to me that Tomb Raider will have a very deep and heavy story element, made clear in this early section of the game by the number of cut-scenes that kick in. None of these are particularly long-winded and they all link into the gameplay sections, but just how intrusive they prove to be only time will tell.