Medal of Honor Beta: Hands On

EA’s rival to Activision’s Call of Duty has had a few years in the wilderness over recent years, with a couple of lacklustre instalments really hurting what was once a big WW2 franchise. After seeing how a change of scenery managed to propel the CoD franchise from ‘decent shooter’ to ‘biggest shooter evaaar’ in the eyes of the lowest common denominator, it wouldn’t take a genius to figure that EA would consider reinvigorating their own IP in a similar fashion. So, this October, we’re due to see the reboot of the once great Medal of Honor franchise, now with a modern setting, the promise of an all conquering online mode, and a beard to rival the moustache of a certain Captain Price.

While EA Los Angeles have been busy putting together the single player campaign, multiplayer maestros DICE have been concentrating what they do best to complement EA LA’s work, and our first taster of what they’ve produced has recently begun with the multiplayer BETA having gone live this weekend just passed. I was lucky enough to grab myself a code, and what I’ve found is a solid and enjoyable online experience, but that’s about it.

The first thing to note here is that DICE have brought their excellent Frostbite engine to the party, and upon hearing this, it instantly put any questions I might have had about the potential quality of what I was about to experience to bed. It did, however, leave me worrying about whether Medal of Honour would just prove to be Battlefield with a new lick of paint, and in many respects that fear is realised.

In this beta we are treated to two maps, two modes, and three character classes. The two modes on offer are Combat Mission (which I’ll go into in a sec), and Team Assault, which is standard deathmatch fare. As not to bore you senseless about the details on what happens in a deathmatch mode (here’s a hint; you shoot people), I’ll simply stick to the more interesting aspect; the Combat Mission mode, which is on familiar ground for Battlefield fans, but thankfully not too familiar.

Rather than focusing solely on one type of objective, a’la Rush or Conquest, Medal of Honor takes the Killzone 2 route and mixes things up a little. Over the course of the match, the Coalition Forces must complete five different objectives one after the other to win. These include such militaristic tasks as planting charges or capturing key points, while the Insurgents must defend each objective with their lives. This sounds fairly typical of DICE’s previous work, but surprisingly it manages to feel a lot more organic than before. Completing one objective, and then rushing towards your next, different, objective as a team unit has never hit me so viscerally before. With that, the titling of this mode is absolutely spot on; often it does feel like a proper cooperative military mission, to the point where I shamefully didn’t even realise the opposition weren’t AI until I got taken out that first time. 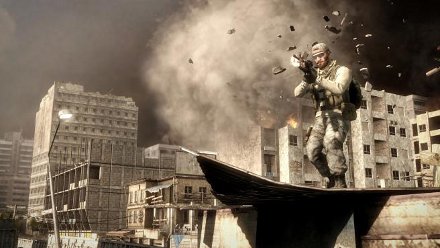 It won’t surprise people to hear that the controls are smooth, they give a feel that sits somewhere between Call of Duty and Battlefield, and probably more in the camp of the latter. Visually, however, it’s hard to deny whose scalp EA want here as the game oozes Call of Duty from every orifice; from the sun-drenched Eastern environments to the scores that appear above your victims head when you successfully bag your kills (that yes, can be used to unlock 14 levels of upgrades and customise your character). Look a little deeper and you’ll see some cracks; slightly jagged edges, a poorer texture here, and a crap explosion effect there. I put most of this down to the fact it’s a beta, and that DICE have always incorporated vastly more expansive maps than the smaller choke-point focused maps of Infinity Ward’s titles.

I also have to say that it’s a very strange experience to enjoy this great engine once more but without the amount of level destruction you’ve come to associate with it. Sure, cover (of which there is plenty) is partially destructible, making scrambles to safer areas intense and enjoyable, especially when under heavy fire, however it really lacks that destructive punch present in DICE’s previous work. That’s the main issue with this beta, it’s hard not to compare it to their back catalogue.

At the moment there are some technical issues, the most regularly grating of which is an irritating momentary pause before showing the third person death animation. The most damaging though, are the couple of times when I earned a ribbon or award in gameplay for the beta completely to lock up and crash my PS3. A quick google shows that these aren’t isolated incidents, and it’s put me off venturing back into the beta until I hear it’s been fixed. I also had the odd connection issue, but knowing DICE’s record, these are all problems that will be promptly sorted, at least for when the game hits the shelves. The biggest problem I had with the game wasn’t even technical. Let me explain. 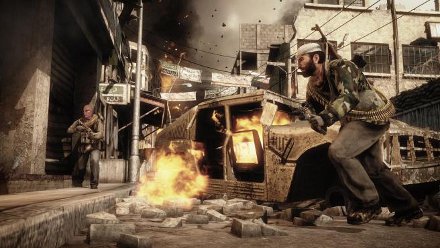 You may have noted above that I’ve used the words ‘Coalition’ and ‘Insurgents’ to describe the factions used in the game, and I’m honestly a little disturbed at how it is exactly how it sounds. There is no anonymity in Medal of Honor, you are not fighting in ‘Namelessistan’, or starting wars with an unnamed area of mother Russia; you are playing a game based on real conflicts that are happening in the world as we speak. We’ve all played as marines before, and we’re used to it, but when you’re shown a screen labelling you as being a member of the ‘Taliban’ and you have to gun down Coalition forces, it sits a little uneasily. Even to the point where even I, Mr Tasteless, am unsure about making a joke regarding the Taliban suing over property and image rights.

I’m not an over-sensitive gamer either, I’ve laughed at jokes I shouldn’t have, I’ve defended many a violent or brutal game in the past, pointing to context to justify a game’s setting, but I genuinely find it hard to do so here. It’s very close to the bone and very real situation to a lot of people out there. Okay, twenty years on, but now? Didn’t ‘Six Days In Fallujah’ get hounded out of development for less? It depends on context I guess, and creating that justifiable context is hard to do in an example that’s online only. If the single player ties it together with a tasteful narrative, it’s something that I believe people (outside of the hysterical media) will feel easier with.

I want to move on from that uncomfortable subject to wrap this up, although it was something I felt I had to touch on, I’m not here to discuss taste or politics. I’m here to tell you whether the beta is worth playing and the answer is yes; for me it is. What it does at this point in time isn’t ground-breaking in the slightest, it’s actually fairly typical of the genre. It is, however, solid; it suffers no lag, and offers up expansive FPS multiplayer action in huge maps, but that’s what you’d expect with the calibre of developer behind the online mode, right? This small slice of the action is more than enough to pique the interest of even the most modern warfare-weary gamer, but so far offers nothing truly different to make you sit up and think ‘wow’. I look forward to seeing how this evolves over the coming months.