NRA release a ‘shooting range game’ – irony is missed on them

Eurgh. I don’t really want to write about this. All I feel I’m doing is pointing out the obvious. A group of people, desperate to cling to power and terrified by change. They jump onto a bandwagon when it suits them and use a tragedy to pull at people’s heart strings. All to suit their own agenda.

Ladies and gents, this is a quick look at the NRA and how they’ve used games as a scapegoat, a publicity tool and a recruitment device.

The NRA (National Rifle Association) aim to promote responsible gun ownership and protect the second amendment rights of all Americans. They’ve got a lot of members and they hold a lot of power. Alongside some serious political chops, they also hold a fair amount of power when it comes to lobbying within the American legal system. All-in-all, they’re pro-gun and anti-change.

Firstly, let’s deal with the headline right up there. The NRA released, or at least ‘officially endorsed’, an iPhone app that simulated a shooting range. 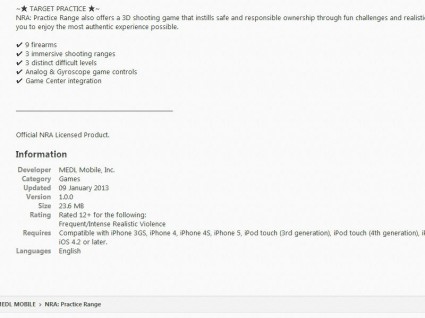 Someone got in there pretty quick and upped it to 12+. Good for them…

Not a news story so far. In fact, it makes sense. A group dedicated to promoting gun safety and responsible usage endorses an app that encourages such things. Makes sense in the day and age of smartphone apps. Gotta appeal to the kids. The kids!

Why this is news and why I have to sadly write about this is that it’s one of the grossest examples of hypocrisy I’ve ever witnessed.

Initially being launched with an age rating of 4+, the app is now said to be suitable for ages 12+ according to iTunes’ system. You could argue that promoting a child aged between 4 or 12, to use a gun, isn’t ideal and even wrong. A fairly solid argument, though one that this piece isn’t going to focus on. 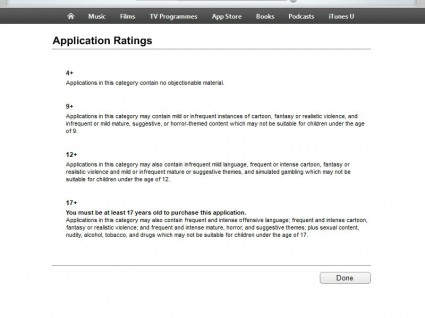 The NRA app turned out to be pretty objectionable in the end.

What’s gross is the way that the NRA will use games to promote their agenda, of getting guns (real ones) into kids hands whilst simultaneously calling for an end to violent videogames and films.

Topping off the hypocrisy is the outrageous timing and hijacking of a national tragedy. No less than a month after the Sandy Hook shooting which took 20 children’s lives, the NRA gave a press conference that used the massacre to promote their anti-game, anti-film and pro-gun agenda.

The video cannot be shown at the moment. Please try again later.

In summary, this is a gross move that shows nothing is below the NRA in their attempt at staying relevant and stopping change occurring.

NRA, stop doing this. Stop blaming every medium of entertainment that contains violence. It’s all of them.

Stop using tragic events and the deaths of children to shine a light on the ‘real problems’. The problem, especially for those dead, was the bullets coming out of that gun.

And please, stop involving yourself in anything game related. I don’t want to write another fucking word about you, your ‘fight’ or your ’cause’.