As of today at 10:00am PDT, you can access the Destiny Beta on PlayStation 3 and PlayStation 4, and here is some important information to get you started. Don’t worry, everything applies to Xbox 360 and Xbox One owners as well, who will gain access to the Beta on July 23 at 10:00am PDT.

I had a chance to play Destiny during the first-look Alpha on PS4 and while I expected it to be a cross between Mass Effect (design, setting) and Borderlands (gameplay), I discovered that the single-player, co-op, adversarial, first-person shooter and third-person dance sim MMORPG is much, much more than that.

If you don’t know much about Destiny, let’s get the obvious comparison out of the way: Destiny is made by the company that made Halo and it feels a lot like Halo. The way you move, jump, melee, and ride vehicles feels like Halo but everything else is brand new.

The Alpha started with a character creation process allowing you to choose from three classes (Titan, Hunter, Warlock) and then three race options (Exo, Awoken, Human), with male and female variants. Customization goes way beyond anything in a Halo game, in part because your characters have faces and hair but also because you’ll be seeing this character at all times. 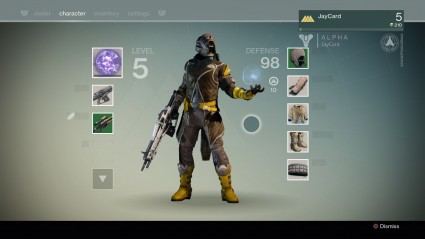 One of my Guardians in the First-Look Alpha.

Your character, called a Guardian, can be used across different modes including the Tower (a social hub), Story (campaign), Strike (co-op missions), Crucible (PvP), and Explore (free roam). Your character will gain experience, items, and currency throughout all modes, while upgrades and level bonuses are effective everywhere but Crucible, because bonuses are removed and all gear is normalized for a level playing field.

To play in the Beta you obviously need a Beta code. Beta codes are being provided to customers who pre-ordered the game, but that’s not the only way to get in. Every Beta code actually gives you three download codes. So if you haven’t pre-ordered and see someone on your friends list playing the Beta, ask if they still have an extra download code, since it’s very possible they have one or two. The idea here is that since you can play the game in Fireteams of three or more players, the extra codes allow you to bring some friends along for the ride. It is of course, also a great marketing move by Bungie.

While the Alpha threw players into the game at level 4 with access to one Story area, one Strike mission, one Explore area, and one crucible (competitive multiplayer) map and mode, the Beta features much more content from the beginning of the final retail game. This includes the opening cinematic, story missions, more crucible modes, and strike missions. Each character you create will start at level 0.

One important piece of advice is that you explore every corner of the Tower. 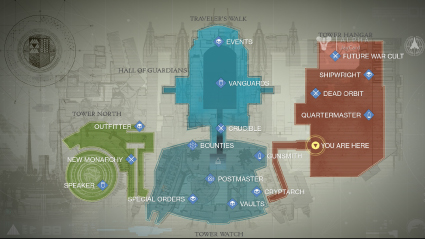 The Tower reminded me a lot of the Citadel in Mass Effect and this is where you’ll interact with many important NPCs. You can buy new weapons, armor, vehicles, get mail, decipher items you’ve found, and find bounties. This is your hub/home base and it feels different from the rest of the game because you are always in a third-person perspective and there is no combat.

A very cool feature is that Android and iOS users can download the Destiny Companion app for use during the Beta, which provides access to your characters and inventory. You can actually change your loadout and armor from within the app so it’s ready to go when you log into the game! The app also feature full 3D models of your characters. 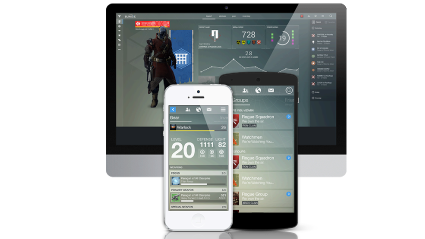 Bungie has kept many details under wraps and said that content may change throughout the Beta. We currently don’t know what the level cap is or what content, if any, will open up as the Beta progresses.

The retail version of Destiny launches on September 9. For more information on the Destiny Beta visit their website.