The Vent: Treading Water in the Shallow End

Since when did we all become so shallow? Back in the day a game could look like the back-end of a particularly ill cow, and as long as it played well and had charm its success wouldn’t be diminished. These days, if every single title doesn’t look about as good as it possibly can it’s side-lined with short-sighted, childish comments like ‘last-gen graphics’ and ‘would’ve looked nice on the PS2′. This gives a false impression that the entire game is a bag of shit, which is very often not the case.

Being a user of LoveFilm and a man of few pounds, I rely on the stead stream of rented titles to keep me occupied during my long weeks of extended joblessness. If I only focussed on the AAA, top-class titles, my list would be about 10 games long and feature more than a few I’ve already got in my collection.

So I pad it out with the underdogs, the obscure ones; the games everyone dismissed because some jackass moaned about the graphics and a few bugs and slapped a 6/10 on it; which these days is a death sentence. There’s nothing wrong with these games; by and large they’re playable, enjoyable experiences. So why the hell do we leave them to the wolves, destined to rot in the bargain bins of Tesco?

Mainly because we’re conditioned to. For years now, reviewers and journalists have been banging on about graphics, preaching in a language few fully understand but we all take to mean ‘it looks better’. We’ve been coerced into thinking that better graphics make a better game.

It’s everywhere; pick up any gaming mag on the shelf and look at any preview. No doubt there will be a comment about the graphics and no doubt it will be one of two kinds; a comment professing how gorgeous it looks or a counter-comment condemning how shite it looks. This leads us to immediately think one way of the other about the game. I do it too; we all do and I doubt it’s going to change anytime soon.

It also more than influences a reviewers score on a regular basis. I regularly read reviews that talk quite positively about a game for almost the entire body of text, before slipping in a crack at how shit the graphics are and slapping a mediocre score on it. Its sickening and goes to show how look-obsessed we’ve become.

Now I’m not saying games shouldn’t have good graphics; I like a jaw-dropping vista as much as the next man. Yet, should we be dismissing games based on their graphics? Not every game has to look as good as the console would possibly allow, and many have absolutely no chance of achieving that level of graphical prowess anyway.

Infinity Ward, Treyarch, Epic, Bethesda, Ubisoft. All have produced games that look stunning, and on occasion have raised the bar when it comes to what we expect from this generation’s hardware. They also  all have enormous coffers, massive teams and the best people.

I once read a quote from Bethesda boss Todd Howard that stated the company gets about 100 CVs a week and over a thousand applications for every job they post. Out of these, apparently almost all of them are qualified and have some relevant experience. Whether that’s an exaggeration or not, the point still stands; they can pick from the best of the bunch with very little effort.

With this sort of pedigree, resources and cash-flow, its no wonder these leading developers are producing some of the best-looking games we’ve ever seen. Yet we expect exactly the same from smaller, poorer and less experienced developers and condemn them when they don’t make good visuals. So dismissive has the culture become, that all too often wild accusations and ridiculous claims make their way into what are otherwise relatively balanced reviews. 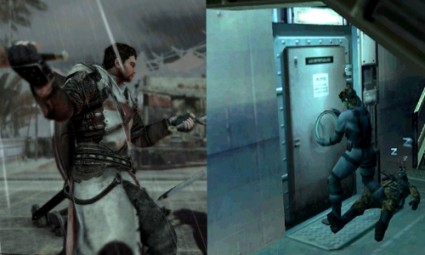 It's quite obvious which game is from the last generation...

It seems to have become a staple to claim sub-standard-looking games have graphics reminiscent of the last generation, so I thought I’d put it to the test. I recently got The Cursed Crusade, a flawed but enjoyable game that was ritually panned for its graphics when it came out. I also have a PS2, complete with component cable, and a collection of excellent games for it.

So I boot up The Cursed Crusade and sure enough, it doesn’t look great. Textures are low-quality, facial animation is lazy and most of the environments are uninspiring. Note how only one of those points is actually related to graphics; the other two are to do with animation and design.

I then boot up the PS2 and slot in a few games that had graphics to shout about back in the day. Metal Gear 2, Final Fantasy XII and God of War. None of them look as nice as The Cursed Crusade. While they do look lovely for the time, none of these apparent last-gen stunners can stand up to even the most basic graphical presentation from an inexperienced studio on the current generation systems. The claim that The Cursed Crusade looks ‘last-gen’ is utter and complete bollocks; a slung statement to make the reviewer sound cool when condemning a game for not looking as good as Gears 3.

The game itself? Surprisingly good. It has an impossibly varied combo system, catering for all combinations of axes, shields, swords and maces. I counted 15 combo trees. It has an upgrade system that sees you accruing pieces of armour as you level up your Armour stat, and looking cooler in the Cursed world as you upgrade your Curse stat.

The aforementioned Curse world is a brilliant-looking version of whatever area you’re in, complete with layers of brimstone, hidden objects and a doomed, red sky. The combat, while buggy at times, is complex and satisfying, mixing the combos with a neat counter and guard mechanic to create a weighty flow that often looks like playing a brutish action movie akin to Gladiator.

The story is admittedly a load of shit, made worse by poorly scripted characters, but the voice actors do a great job and the plot at least gives you a reason to hop about the ancient world fucking shit up. Overall it’s not the best game I’ve ever played, but certainly enough fun to spend a weekend blasting through it.

I believe playing up how poor a game’s graphics are is a neat and shrewd way of keeping it in line. No-one wants to see a no-name game from an unknown studio get the same score as a known franchise sequel. I personally would give The Cursed Crusade a 7/10, if I believed numerical scoring was any real use to me. That would make it, by many publication’s systems, almost as good as MW3, Fable 3 and Borderlands.

This of course wouldn’t make sense, because they are generally better games; better made and more popular. So they have to drop the score, and the easiest way is to put the graphics down. Oh, the graphics aren’t mind-blowing, there’s a point off. They also pick on minor bugs, plot-holes and one-dimensional characters; all things that are prevalent in many of the highest-grossing games but are ignored in favour of the overall experience. Maybe I’m wrong but it’s hard not to assume these things when good games regularly get dismissed as crap.

So the next time you read a review that bashes a new game for its ‘awful graphics’ and ‘last-gen feel’, just remember this. Gears 3 is not the standard. Bad graphics do not make a bad game. Oh, and Call of Duty has always looked sub-par. Go figure.