While the quality of the much-pilloried Channel 5 is debatable, the pedigree displayed in its flagship Monday night show is certainly not. Since its inception it’s gone from a quirky show about geeky gadgets to a behemoth of television regarded as the word on all things tech, encompassing a mammoth website and, for the last few years, a massive expo. The Gadget Show Live has grown exponentially over the years, and we here at TIMJ covered last years event in video form here.

This year we’ve taken a similar tact, with new recruit James O’Leary taking to the lens to bring us reviews, news and interviews from across the entire expo. For those of you who just can’t wait, I popped along to the exclusive press day and spent most of my time loitering in the newly improved Game Zone to bring you a sneak peek at what was on offer. Relegated to a corner last year, this time it had its own hall complete with a special, bouncer-guarded 18+ section. This was, of course, where most of the juicy titles were hiding and I managed to get a hands on with a few of them. So here’s your little taster; think of it as a textual appetizer to James’ juicy video main course!

This is the one many of us have been waiting for. Probably in production for longer than any other game ever, the sequel to Duke 3D is finally hitting the shelves this June and developers 2K were nestled in the 18+ section.

The section I got to play was actually a remake of the final level of Duke 3D, fashioned as the opening scene of Forever. I’m not sure if this is fan service or just a way of saying ‘yes really they to fit together despite the 14 year gap!’ but either way it’s a great show of just how detailed and brilliant Duke Forever is going to be. Everything is interactive, from urinals to the whiteboard Duke is asked to draw plans on at the start of the level. As per Duke tradition, neither of these actions need to be taken seriously; I for one tried to miss the urinal and drew giant phallic shapes on the planning board, to the confusion of the expectant soldiers.

The gameplay itself feels like an odd time crash. The adrenaline filled strafe-based action of previous Duke titles remains, with en emphasis put on dealing shit-tons of damage while having the most fun possible. Yet 2K have not been shy of bringing Duke bang up to date, with the addition of massive cinematic set-pieces and the obligatory Left Trigger zoom, although they seem to have stopped short of the regenerative health mechanic. 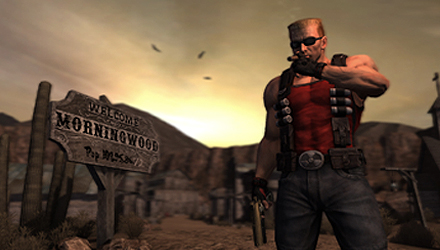 Hail to the king baby!

Duke Forever looks amazing. Every tiny detail is rendered with graphical fidelity usually reserved for tech demos and show-off videos. Considering the time in production this is to be expected, but I mean it when I say Duke Forever will be at the cutting edge of the console’s current graphical ability and will most likely look even sexier on a beastly gaming PC. Sound is not an issue either, with Duke’s trademark quips and exaggerated machismo making a welcome return, along with all the epic explosions and sounds of crushing battle we’ve come to expect from triple-A shooters. Let me be clear; Duke Forever will be a five-star, top brass title. Whether the public picks it up after all these years is debatable, but by the looks of things, those that don’t will be sorely missing out.

Mortal Kombat
I was never a big MK fan, always preferring Street Fighter or Tekken, but the new reboot looks set to change my mind. What looks like just a lush, HD remake of the original reveals itself to be so much more during play. The somewhat clunky, Lego-brick style system of old is gone, replaced with an intense, fluid exchange. Punches and kicks crash into each other and flow effortlessly together, creating crushing combos and fantastic damage effects. The trademark blood is back, this time in glorious next-gen glory.

New dev NetherRealm Studios have wasted no time making Mortal Kombat look awesome; each character moving with their own distinct style, light bouncing off their blood-soaked suits as they batter ten bells out of each other. While not aping the cartoon style of Street Fighter 4, its obvious rival, it doesn’t go for the anime-tinted realism of Tekken either. It finds a middle-ground, actually looking like a game. In an age where everyone is going for either photorealism or a special, quirky style it’s nice to see a title focussing on its mechanics rather than its looks. 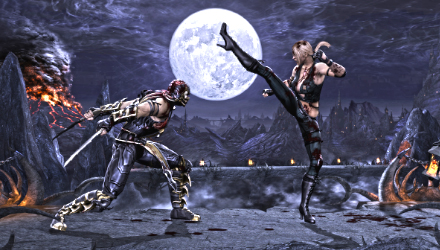 We all know where Sub-Zero's next shot will land...

All the classic characters make a welcome return, including Scorpion, Raiden, Sub-Zero, Kitana, Kung Lao and Lui Kang among others. Apparently only characters from the first three original games will be included, which was reflected the mostly-shadowed demo character select screen. I think what we’re looking at here is one of the great beat ‘em up series’ getting a much-needed shot in the arm and a return to its roots. Despite the fact the machine set up was an arcade cabinet, the fluidity of the combat still surprised me and even with the dingy joystick and awkward button placement, I managed to end Scorpion a couple of times with ease. Is Mortal Kombat becoming (whisper it now) accessible? Is it pandering to a wider audience? Is it doing an Nintendo?! I don’t think so, and I for one am very much looking forward to this long-awaited reboot.

LEGO: Pirates of the Caribbean
We all love the LEGO games and of course the logical conclusion after Star Wars, Indie and Batman is… Pirates? Yes, it may seem odd, but it makes a strange sort of sense, with the Pirates movies making zillions of dollars and being Disney’s most successful series of all time. Does it work in LEGO form though? Yes and no. 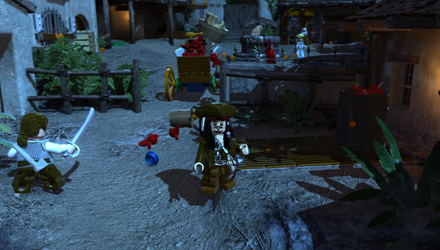 As you can see, it's not much of departure from the rest of the series...

All the stapes are there; simple combat, lovingly recreated characters and scenes, the inability to die. It all works fine and it’s great to see a wobbly little LEGO Jack locking swords with brilliantly designed Cursed Pirates and a distinctly plastic-looking Davey Jones. The platforming is again just jumping from place to place, although the puzzles seem to be a little more complex this time around.

The problem is it all feels so familiar. The characters, locations and events are all from the movies so there’s nothing new there and while there seems to be a bit more emphasis on creating lifelike recreations (if that’s even possible in LEGO) this time around, it doesn’t innovate as much as Batman did. Overall this one didn’t really resonate with me, and this is coming from someone who’s played and loved almost every LEGO game to date and loves the Pirates movies as much as anyone.

Well, that’s the extent of my time with new releases. Not much I know, but stay tuned for James’ massive video coverage for more info on these exciting new titles! Coming up soon, I got to try out some good and not so good gaming tech and found a few innovations that would change the way we play forever, so keep your eyes peeled readers!