I haven’t bought or played a Call of Duty game in four years now. It’s not a matter of disliking the series or its mechanics per say, although I have come to loathe Activision’s annual release cycle. I freely recognise that I’d find an excellent shooter if I were to take the plunge or had to review; however, I’m just bored of what it has to offer for the moment.

I was, however, very interested, even a little excited about the series’ debut on Vita. While yes, the console has seen one or two ‘will this do?!’ efforts from developers on the basis that it’s a handheld system, the drip-feed of quality titles on the whole has been pretty good for a console in its launch year.

Then I discovered that Nihilistic, the team behind May’s Resistance: Burning Skies were at the development helm, and all my enthusiasm for a portable Call of Duty drained from me instantly. Burning Skies only managed to prove one thing in its ugly, bumbling and undercooked way: FPS games can work on Vita, but we should be expecting a damn-sight more from the genre on the console in the future.

Coming up to Call of Duty: Black Ops Declassified’s launch, there were still questions ebbing away at me. Surely Nihilistic have learnt their lesson? It couldn’t be as bland and mediocre as Burning Skies could it?! These questions were enough to see me purchase the game on day one. Call it a morbid curiosity, but even with the ominous lack of reviews, I just had to see how it turned out.

Unfortunately, Nihilistic have only repeated their mistakes…

Apparently, Declassified here takes place between both Black Ops games, but you wouldn’t ever know it, simply switching Alex Mason and Frank Woods in various missions during the 70s and 80s. What little story or set-up there is, much like Burning Skies, is told in the lowest possible quality, pre-mission movies, the likes of which has been done to death a million times over, only better.

Other than that, there’s no pattern or apparent link between the missions; it’s simply a disjointed string of rescuing hostages, killing everyone, protecting one person, with little or nothing to connect the events. While Call of Duty hasn’t ever exactly been Shakespeare, I know that people would expect a little more, as silly as it can get sometimes. 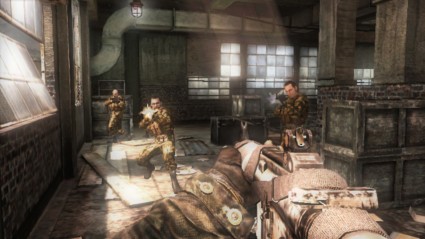 OMG, it's a cloning facility, I think...

Minute man…
Let me get some positives out the way. Declassified, in its general handling at least, does a semi-decent impression of Call of Duty. It’s fast, fluid and works in the way that you should hope, and the button layout will be familiar to most. It’s at least truer to CoD than Burning Skies was to the Resistance franchise. To that end, Declassified does provide a decent early impression, but when you spend some extended time with the game, the problems start to come to light.

For starters, there are some Vita-specific control features, but they add nothing to gameplay. The best implementation is in tapping anywhere on the touchscreen to mêlée; it’s simple and doesn’t take too much time. To throw grenades, you have two options; tap the on-screen button to lob one where you’re aiming, or much like Burning Skies, you can drag the grenade icon to where you want to throw it. This is an annoying process, and it leaves you shifting your hand in the middle of a firefight.

Worse than that, the A.I. is positively fucking awful. When soldiers aren’t popping out predictably or getting caught on scenery (and still running), they can be stood feet in front of you not doing a damn thing. From one extreme to another, they also start shooting at you long before you’ve entered their line of sight and, in some sections, they can tag you through walls. Unlike in the main CoD entries, shooting through walls isn’t a design feature; you’re not extended you the same courtesy.

When enemies spawn, they do so comically and right in front of your eyes, but always from behind cover and in space that they definitely weren’t occupying before, even after you’ve cleared out a room. It’s like they’ve climbed out of the ground, or have amassed themselves out of a pool of liquid that’s just out of your sight, T1000 style.

Any display of ‘intelligence’ is simply predetermined. Replay the same section and they’ll continually and stubbornly run to the same spots every time, and will stay there until they inevitably die. I’ve always felt that it would be a huge step forward for the series to ditch the endlessly respawning enemies and invisible trip wires, just not when constant and unwavering repetition takes its place.

This repetition is something that will become very apparent when you realise that there are zero checkpoints throughout. When you die (and you will; your character has a low threshold for pain), you’ll be kicked back to the beginning of the mission and forced to aim at the same spots, see soldiers move and react in exactly the same way,  every single time. It gets old real quick. It leaves with you no reason to take chances or change the way you play the game; it’s just about refining where you’re going to aim at a given time.

The reason for having no checkpoints is clear, though: the levels are short, almost insultingly so. It seems like Nihilistic were looking for a high difficulty curve with plenty of restarts to provide some longevity, whereas in reality, there’s pretty much an afternoon’s work here to complete a single playthrough once you get the hang of it. If you get stuck on a section, it’ll simply frustrate for a few attempts, rather than challenge.

Declassified’s biggest problem, though, is that the campaign is just so unremarkable. This is a series well-known for its big set-pieces, explosive action and huge spectacle, and there’s just none of that to be found here. It’s essentially a Black Ops themed tin-can alley, a distraction at best.

There are two additional single-modes on offer and both are completely pointless offerings. The time-trials are exactly what you expect; beat the campaign levels in the quickest possible time. To be honest, I doubt many will find the will to play through them more than once.

Hostiles mode, on the other hand, is probably the weakest attempt at a Horde mode I’ve ever seen. Taking place on the multiplayer maps, enemies spawn randomly across the small arena, and you must simply kill them all before the next wave starts. In theory, it sounds okay, but in execution it’s a tawdry attempt at an additional feature that somehow manages to be less interesting than the not-very-interesting campaign… 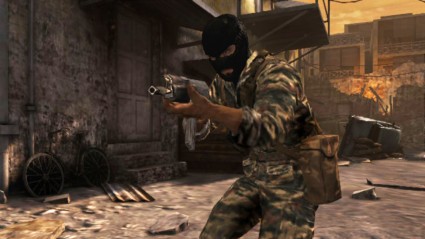 A bland spectacle
Average visuals mar Declassified’s every turn. From the dog-awful, low-quality movies prior to missions that just make a mockery of the Vita’s HD screen, to the identical cookie-cutter enemies that file aimlessly into rooms in every single level.

In its favour, it at least looks like a Call of Duty game, but only at face value. There’s no character, least so in the environments, with each level feeling cold and sterile, indistinguishable from the last.

Repeated tracks…
It’s quite obvious early on that Nihilistic have reused audio assets from Burning Skies, as it sounded all too familiar from the moment I booted it up. The guns, the sounds of folk getting hit, all appear like they’re ripped from their previous game. If they’re not the same effects, then they’ve put minimum effort in regardless.

The voice acting is atrocious too. “Fuck this, fuck that, fuck those people over there for some reason”. Yeah, I’m sure squaddies aren’t exactly the most polite of people in the heat of battle, but this is just some of the most forced swearing I’ve ever heard in a video-game. I wouldn’t mind if the plot gave me a reason to hear our protagonists arbitrarily say “fuck” and the other randomly irrelevant bullshit this many times, but there’s little or no context.

CoD online
Although a little better, Declassified’s online mode is a bit of a double-edged sword. At times it’s hard to get even into a game, leaving you sat on a loading screen for a lengthy time before kicking you back out to the menu, while sometimes you’ll get kicked out of matches in-progress for little or no reason.

When you do get in, though, a lot of the game’s frustrations fade away thanks to the mostly competent controls. Although you’re only looking at 4 vs. 4, the maps are small enough to make it feel bigger in scope, and it’s as frantic and action-packed as Call of Duty should be.

Nihilistic have also at least made a decent fist of capturing a watered down Call of Duty unlock and progression system here, allowing you to level up along with your weapons, unlocking attachments and perks as you play. Create a Class is intact and unlocked pretty quickly, so you can tailor your loadout as best suits your play style.

Unfortunately, it needs to be patched again real soon to fix those connection issues, otherwise I can’t see many players persevering long-term, unless it’s simply because there’s not a worthy FPS on the system. Yet. 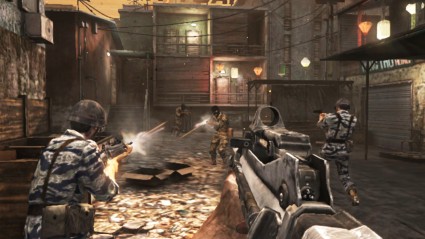 Multiplayer is the only time you'll have teammates fighting your corner...

Strive for better
Call of Duty: Black Ops Declassified is exactly the type of game that we should not be seeing on Vita at this stage, with seemingly no care or thought put into its development cycle. It’s almost as if Activision and Nihilistic simply said ‘Fuck it; it’s just a handheld game’, which is the absolute worst attitude to have.

Recent releases like Need for Speed: Most Wanted and Assassin’s Creed III: Liberation prove that the Vita is capable of handling the big franchises. They prove that ambitious games can be successful on this hardware, and capture everything about their bigger brothers that makes them great. In comparison, Declassified is a slap in the face of Vita owners. We deserve better, and the console deserves better.

Even a partway decent online mode is not enough to make Declassified a package worth your dollars. Give it a wide berth.