Sony’s going through an interesting year at the moment. The unprecedented success of the PS4 has improved their fortunes as a company somewhat, and the momentum seems to be continuing, but of late, the wheels have started to come off ever so slightly (if you’ll forgive the pun). PS+ hasn’t quite lived up to expectations, with November in particular quite weak; but perhaps worst of all are the well-documented issues with one time launch poster title Driveclub.

Unfortunately, despite eleven whole extra months of development time, what we have here is sadly a buggy, incomplete game that currently still has severe issues with its online component, not to mention several features such as dynamic weather which are yet to be added.

This is such a shame too, as the core experience is a decent one, and when they work, the challenges that pop up during each event genuinely do add a different twist to a fairly saturated genre. Here’s where things start to go slightly wrong, though. One of the many issues is that sometimes drift challenges are registered as average speed challenges instead, resulting in impossible challenges of hitting an average speed of several thousand miles an hour. Annoying, considering there’s absolutely nothing you can do, and this will still register as you having lost a challenge. 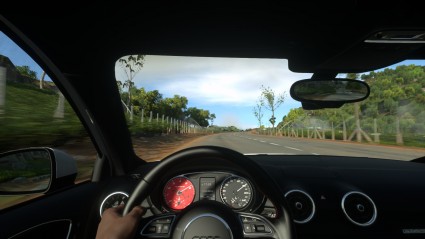 The in-car views are very impressive, although I preferred the view sitting just behind the car

Of course, you might get away with this purely by losing connectivity to the Driveclub servers as you’re part way through the challenge. Sadly even several weeks down the line I’ve only noticed a slight improvement in this. Disconnects are extremely regular, and I often found myself driving round tracks with no challenges as a result. That’s in no way game-breaking, but it affects your score at the end of each race (challenges are a good way to boost this), which in turn makes progression that little bit slower.

So what does work? There’s a reasonably sized single-player mode that presents a number of races, time trials, hot laps, point-to-point races and tournaments to get through. Each has stars to unlock, with varying criteria, and gaining these in turn unlocks more events. There’s also an RPG element to this, with points gained by earning stars, finishing position, challenges, drifting etc. all going towards your racing level, which then unlocks more vehicles, liveries and so on.

To make the most of this, it really does make sense to be in a club as well as this gives you more points, more perks, and is the only way to unlock some of the extras, including some vehicles. This isn’t a matter of purely encouraging interaction with your fellow racers; there’s a tangible benefit too.

Sadly right now you’re likely to see this a lot…

The racing action itself is perfectly decent; I found it to be a gentle and fairly straightforward introduction by way of hot hatches, before I gradually moved up through ever-faster vehicles before reaching the hyper cars. As you might expect, the faster the car, the more difficult it gets, but the handling is balanced well enough that with a bit of practice it’s possible to get even the twitchiest of cars gliding round corners.

I found it pretty satisfying to master some of the quicker cars, although some frustration set in at times while I learned how to drive round the different tracks. With the faster cars in particular, one mistake can cost the race, so I often found myself restarting races over and over. This could be particularly annoying if a spinout is the result of being nudged by one of the other cars.

The A.I. in Driveclub is a bit Gran Turismo-like. I’d say on balance it is better, but the cars tend to stick to the racing line in the main, which often results in them bumping into you just because you happen to be in that line next to them. All well and good at low speeds, no major harm done; but at high speed this can easily knock you off course. Worse still, it could mean you cutting corners at times, which results in a corner penalty where the car is slowed down for a period of time (think drive through penalty in F1 but actually on the track). This isn’t the only penalty – smack into another car at high speed and that’s a collision penalty. 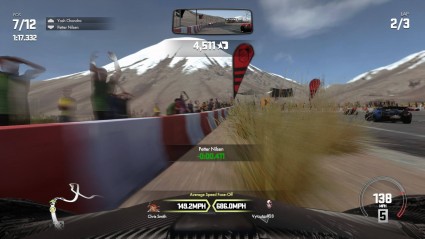 Either there are some serious vehicles in Driveclub or something’s wrong. This is one of the slower challenges alarmingly, I had one that required me to hit nearly 13,000mph!

I understand the idea of these; Driveclub is meant to be about clean racing, but at times it’s difficult to avoid the situations that can lead to these penalties, and frankly I just found it intensely irritating. More successful racers deal with things like corner cutting by making the surface off-road slippery, or make the surface itself slow the car. This to me is a much better, less intrusive, way of deterring corner-cutting, and would at least feel fairer when it’s not entirely your fault. The good news at least, is that a patch is meant to be on the way to make the corner penalty a little less harsh, but that this is needed in itself tells a story.

There’s a good variety of track locations, although driving is only on roads, so there’s no requirement to learn how to drive on dirt tracks or the like that you’d get in Gran Turismo. The lighting and day/night cycle look spectacular on any circuit; there’s no denying Driveclub is extremely pretty, and I found the simulated gloominess in Scotland particularly impressive. The only downside of this is that emerging to face towards the sun is quite genuinely blinding, and driving at night is much more difficult, especially if you’ve started in the daytime. Perhaps complaining about what is genuinely stunning realism is a wee bit unfair though.

So what of the all-important online element? Well, sadly here I have to refer back to my earlier comment relating to server disconnects. Trying to play online can be an exercise in frustration, repeatedly retrying different events until one sticks and you get online. I got plenty of matchmaking failures, got kicked back to the lobby during most events I played between races and got server errors multiple times. 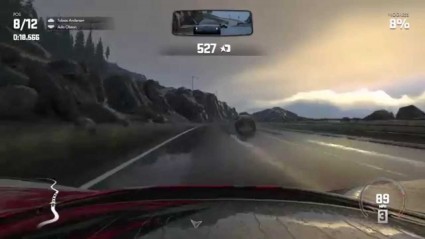 There’s no denying Driveclub looks lovely, and Scotland is atmospherically gloomy. Weather effects obviously not actually in the game yet though…

The sad thing is, when I was able to get online (in fairness generally it would only take about five minutes before I was successful, which is much better than matchmaking in some games recently), it’s decent enough fun. There are plenty of different events to take part in, and to make the most of the club element, you can choose to take part in events in advance and then alert your club so they can join you.

Then you have team races, just straight races, etc. One issue I did have was with ghost cars though. These can be alarmingly jittery online, which is horrible to watch, and extremely off-putting. My only other issue was my being a wee bit rubbish online, but then that just means I need more practice, and to not be such a bad loser…

There’s no kind way to put this. Driveclub was not, and even now weeks later is not, a complete game. It should never have been released in this state, with features missing, and a plethora of online issues which it must have been in some way possible to envisage. In spite of that though, there is enough to enjoy that it’s worth trying if you really like your racing games and can’t bear to wait. It looks fantastic (and I’m sure the eventual arrival of the dynamic weather will be amazing), the racing is solid, and I enjoyed working my way through the ranks in single-player.

Even looking beyond the bugs, it’s far from perfect. In particular the corner and collision penalties are annoying, and the A.I. could be improved. It can also be unforgiving, but I’m actually okay with that in a racing game as I enjoy the challenge of learning to get to grips with the cars and the tracks.

Should you get it though? Right now, if you’re desperate for a racing game and can live with the issues I’ve mentioned then go for it. Otherwise, while it does enough for me not to condemn it, I simply can’t recommend it at the moment either.

Note: Given the status of Driveclub at the moment, we’ll re-visit it down the line once most of the current issues have been addressed.