When you’ve never tried even a single iteration of a long-running franchise, it makes you wonder what you’re missing out on. Since its inception in the PlayStation 2 era (in the form we’re familiar with, at least), the Dynasty Warriors series has probably put out something like seven-hundred and eighty-one games out by now, give or take; but until recently I was yet to try one. Having a couple of mates that are long-time fans, I wanted to see what all the fuss was about. So with the seven-hundredth and eighty-second title coming out on PlayStation 4 and Xbox One, Dynasty Warriors 8: Empires, I thought it was about time I put it through its paces.

I’m sorry to say that I needn’t have bothered. Despite being far from a dreadful experience, Dynasty Warriors 8: Empires feels dated to the point that I can’t imagine it must have evolved far past its PlayStation 2 roots.

As part of the Empires sub-section of the Dynasty Warriors saga, my understanding is that the game adds a dose of strategy to its usual trademark large-scale battle formula. You start by picking a character, then jumping into one of several scenarios. Like grand strategy titles such as Crusader Kings II, the world map is split into multiple territories controlled by various leaders, and your objective is to unite all of the territories under a single rule: yours. 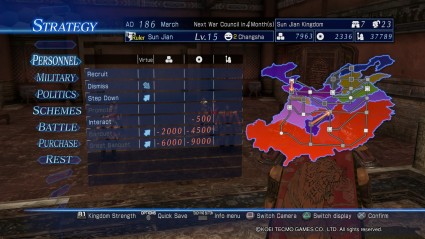 This country ain’t big enough for the twelve of us.

This strategy component is turn-based, split into the months of the year. Every action you take, from invading a territory to recruiting more soldiers, or even buying a weapon or promoting one of your officers, advances time by one month. Right off the bat this seems a little unbalanced, as it discourages more nuanced actions in favour of the obvious conquesting and conscripting more soldiers. Although the strategy aspect isn’t inaccessibly difficult by any means, I did find myself scratching my head over the importance of some options, like meeting up with an officer to increase how much they liked me.

Much of Empires, in fact, seems geared towards Dynasty Warriors diehards, with little in the way of explanation for anything. Menus are haphazardly constructed, with important options hidden from sight, and what little exists of a tutorial system is very much inadequate at introducing both the strategy and battle elements to a newcomer. At some point I discovered that the game did in fact hold the answers to most of my questions, but these were unfathomably walled within an in-game manual. A manual that isn’t even properly integrated into the game, but rather launches a web browser to try and navigate through on your console. A hideous approach to user experience.

Thankfully, as you do get to grips with Empires there is some enjoyment to be had. It’s satisfying to watch your empire grow (and heart-breaking if it falters and shrinks), and there is a reasonable, if not substantial, amount of depth involved in conquesting the map. As well as expanding your territories you’ll be defending from counter-attacks; recruiting officers and training them up; cultivating armies and resources; managing the happiness of your kingdom and subordinates; forming alliances and completing target objectives you set yourself. 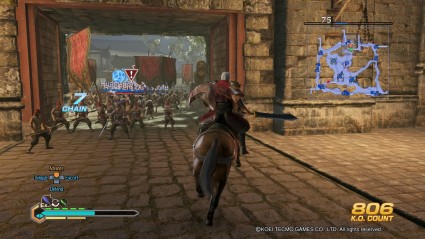 Battles are one facet of Empires which feel distinctly outdated. They mostly revolve around capturing and defending outposts, whereby depleting enough enemy forces at a base lets you capture it. This system is absolutely fine in theory. Yet the mechanics are ropey at best, and downright laughable at worst. This is unlikely to be news to anyone with experience of Dynasty Warriors, but for a newbie it’s quite jarring to witness it for the first time in 2015. Enemy forces are literally brainless swarms which fall to your sword in droves. Combat consists of button-mashing Square and Triangle, with the occasional special move thrown in when a meter fills up. Officers provide more challenge, but battles with these are janky, frustrating affairs at times.

Not only are the combat mechanics shonky, but the visuals are by far the worst I’ve seen on new-gen. Blocky character and object modelling, flat lighting and dreary grey and brown texturing are the order of the day here. The levels are rife with invisible walls and confusing layouts. Animations and physics are stiff and unconvincing, whilst soldiers pop in and out at whim. It’s inexcusably poor. 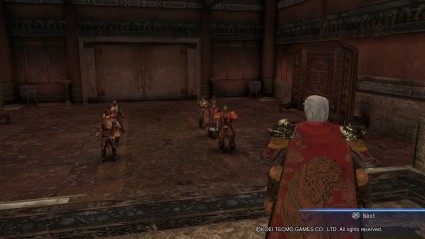 This stunning scene awaits you every time you hold a ‘war council’. Breathtaking.

Thankfully, there are some solid concepts buried underneath the dross. You can mix-and-match ‘stratagems’, essentially special moves; some of these are large scale effects which can turn the tide of battle but require a couple of your officers to retreat temporarily as a trade-off. Fights with officers work on a rock-paper-scissors system, where certain affinities of weapons are better against others. You can also issue basic orders to the soldiers under your command, telling them to defend a position or advance into enemy lines.

Likewise, whilst combat is a little slipshod and repetitive, there’s still some rudimentary satisfaction in hacking and slashing away at hundreds of foes. There’s a definite power trip in play when you’re on the winning side, decimating enemy forces and steamrolling their bases. When you’re losing, however, matters can quickly turn sour and spiral out of control. Fail a single battle and you risk losing thousands of men, having some of your most powerful officers captured and surrendering territory. This defeat creates a knock-on effect in which your forces are weakened, leaving you open to further invasions. Thankfully, if you’re forced to battle at a disadvantage you can enlist the help of a second player either locally or online to fight alongside you – a real lifesaver.

Dynasty Warriors 8: Empires is by no means an awful game. Most of the framework and concepts are solid enough, and if it gets its hooks in you, there’s plenty to keep you entertained: a good handful of different scenarios with countless strategic possibilities, many different characters to choose from and a customisation suite to personalise your leader and their army. It’s just morbidly antiquated by today’s standards. I’m not even exaggerating to say that the graphics and general presentation are akin to an early last-gen release. Much of the mechanics and other gameplay systems are implemented ham-fisted or half-baked, and you’ll need to study the clunky in-game manual to get a grasp on them. 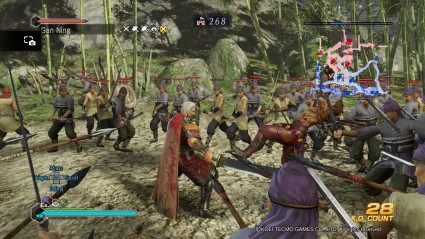 Dynasty Warriors stalwarts will know what to expect by now and may be perfectly sated by what Empires has to offer. For strangers to the series, however, it’s worthwhile only as a bargain bin special; a playable but inessential distraction.

If you are interested in giving Dynasty Warriors 8: Empires a go, you can at least do so risk-free. The Free Alliances version is a stripped-down, free-to-play download available now – find out more here.