The problem with annual releases, especially in sports games, is that incredibly thin line between continuity and repetition that means often it’s not until you look back at the previous iteration that you really appreciate the subtle changes. The Football Manager series is unquestionably one such franchise, with detractors claiming a new skin and updated squads is the sum of the annual update, whereas it often takes months to really notice the difference.

This year, Sports Interactive’s number one seller looks to shake things up a bit with a number of more obvious changes that hit you right from the off. While this should keep the critics quiet for a little while at least, it clearly challenges veterans of the series in a way us sports games fans are not so used to.

For the first time in years, the user interface has seen a genuine change, with the main menu shifting from the top of the screen to the left and a few of the sub-menus being slightly rejigged in terms of location. I have to admit, my initial reaction was one of slight horror, but far from being a change for the sake of it, the new menu system streamlines almost everything you do, putting anything of value within a couple of clicks. Once that initial bedding in period passes, it’s fair to say I now have no idea how I coped with the old system.

Another big change comes in the creation of your persona and management of your career, as set-up adds the ability to designate points to various areas of expertise to set out the kind of manager you are going to be. The greater level of qualifications and playing experience you give yourself, the more points you have to work with. The split of these is decided by pitching yourself as a Tracksuit manager, which boosts the available points for things like Attacking and Technical skills, or a Tactical manager, which boosts the options for things like motivation and man management. 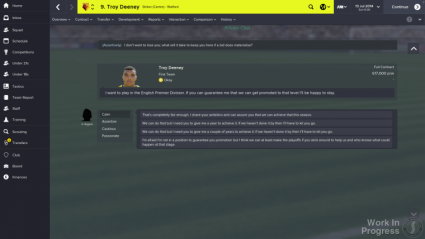 Players prove to be incredibly demanding…

You can assign points to the various areas like attacking, defending, technical and tactical and these will continue to develop over your career depending on how you structure your training. Disappointingly, you don’t get the option to assign extra points despite being able to do coaching badges for the first time ever, which is really satisfying option, letting you feel like you have more control over your future. Picking when to do the courses is part of the challenge, as you’re less effective at training while on the course. Your staff will also be going off to do various courses themselves and obviously, you have to convince the board to fund your education, which is not always easy. Especially if, like me, you like to begin the game from the lower reaches of non-league football.

The more subtle changes include more demanding players than ever, with them banging on your door if they’ve been left out, even for just a few weeks. Press interactions have also been ramped up a notch as well, with the occasional question being thrown up at kick off, as well as the regular pre and post-game slots. Despite them still getting repetitive over time, there is definitely a bit more variety this year.

My favourite addition of all, though, is the in-game team talks. Shouts and tactical changes have served us well for years but, as with the new sidebar, I genuinely can’t believe in hindsight that we’ve coped without the ability to shout genuine advice at our teams during the game before now. It’s a simple addition that gives you options like “Encourage”, “Demand More” and “Push Forward”, with all the various tones to change the emphasis and it makes you feel like you can really affect the team’s performance. There is nothing more satisfying than an assertive ‘Encourage’ followed by a ‘Push forward’ that sees you go 1-0 up shortly thereafter. That or a simple ‘Tighten up’ or ‘Concentrate’ as you’re hanging on to a narrow lead followed by the boys seeing the job through. 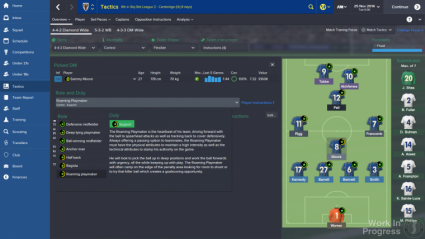 As with previous versions, both audibly and visually there is very little notable upgrade besides the afore mentioned shift of the menu bar. The main presentation looks almost identical and the 3D match engine has had nothing more than a minor upgrade. In-game cheering remains incredibly basic and there is still no presentation or menu background music on offer. Of course, none of this really matters, as the beauty of Football Manager is not the way it looks or sounds, but in the way it drags you into the world of football management and simply refuses to let you go.

Player searches and scouting follow the tried and trusted formula of previous versions and your ability to make requests of the board like more money for transfers will play a big part in their satisfaction level. The balance of keeping the board happy, appeasing the fans and managing the players personalities is as demanding as ever and a genuine pleasure.

Outside of the main game mode, the now familiar challenges return, though I did feel a bit let down that there is nothing new at all here. My only other criticism comes from the tactics screens. FM 2015 gives you the most comprehensive and easy to use set-piece creator that lets you manage how you attack and defend at these key moments  through a handy wizard. Unfortunately, from changing my basic formation or just after restarting the game, I’ve found that all this has been restored to default and I had to go through the while process again.

FM 2015 is comfortably the most complete and enjoyable version of the series to date. Each of the new features feels as though it has been researched and tested, has a genuine, positive effect on the immersion and adds something to the experience.

I can honestly say that not only have I been immediately drawn into the Football Manager experience again, but I have felt more in control of my career than ever before and I am loving every single minute.