I’m the sort of player that would rather use subterfuge, diplomacy and economic muscle to rule a planet or country or whatever it is that’s there to be ruled over. This is why I was so looking forward to getting my hands on Grand Ages: Medieval, which promises to put you in charge of an unassuming kingdom and let you use brains as well as brawn to take over the place.

Sadly it doesn’t quite keep its promises. Grand Ages: Medieval soon becomes bogged down with an overly complicated and poorly explained economy, boring combat that requires and offers little room for tactics and diplomacy that boils down to paying-off kings and queens. On top of this it moves at a snail’s pace.

Let’s get some of the superficial issues out of the way. The game doesn’t look great. All of the units are tiny and their icons are fairly non-descript. Having spent hours playing the Civilization games, maybe I’m a bit spoilt when it comes to well designed menus, icons and screen layouts, but getting used to how Grand Ages: Medieval looks and controls was a struggle. On some menus you can use the D-Pad and on others you can’t. Some menus make use of L1 and R1 buttons whilst others don’t. On second thoughts, these aren’t really superficial issues but in comparison to my other complaints these are fairly minor.

Problems start with the main campaign which actually acts as an extended and rather slow tutorial. It’s broken up with some sparsely animated cut-scenes that use a graphic novel style presentation. The issue is that some of the goals being set by the campaign are tedious and only highlight how boring the game is as a whole. Trade some clothes, fight some bandits and engage in some diplomacy. This could be fun but I’ll go over how each of these three areas fails.

First is the economic aspect. As with any good empire building game, you’ve got to keep an eye on the coffers and ensure you’re making some money. Grand Ages introduces a system of trading resources that, in theory, uses a supply and demand mechanic to alter the prices of resources as time flows. The problem is that keeping an eye on the price of resources is very boring and selling resources is far too monotonous to do manually. You’d have to manually select each of your traders, send them to somewhere to buy some resources, send them elsewhere to then sell. It would take an absolute age. 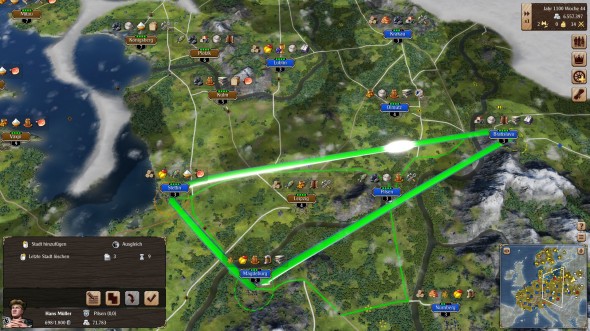 Trade routes. This is as exciting as it looks.

Luckily this can be automated, sadly, this is also really boring. You draw a route for your trader to wander and then watch as it forever circles from city to city. Is the trader getting you the best deal? Is the price of the resources rising or falling? Do you care? Probably not – meaning the potentially interesting supply and demand mechanic is now dead in the water.

Still, with all those traders doing the boring work you can focus on the good stuff, right?

Traders will earn you money, meaning you can improve your towns. Improving your towns will mean you get more resources. More resources will mean more money. More money means – you get the idea. Improving your town isn’t very interesting as all you do is navigate a menu, press ‘x’ to build more of a building and wait for a bar to increase. There’s no placing of building to reap natural resources or managing of civilians. Nothing.

Nevermind. With the money taking care of itself you can now indulge in the combat and diplomacy of running a medieval kingdom. Lucky you. 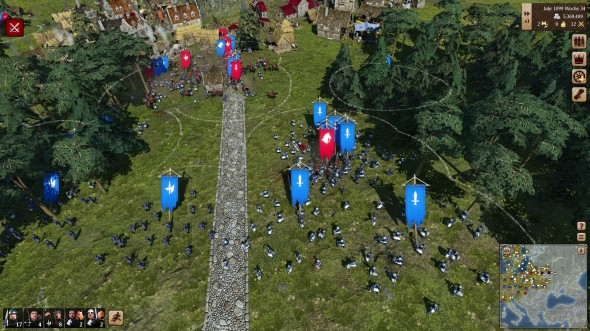 Combat. This is less exciting than it looks.

Combat involves buying troops, waiting for them to be ‘built’ much like you wait for a new mill to be built and then deploying them. There’s nothing tactical to warring as it often comes down to the army with more people in it will win. Troops are simply bought and then cost money to keep alive. This might be interesting if there were plenty of troop types to use, but there’s not. In total there’s eight unit types that everyone has access to and then there’s a further five unit types locked to different empire types. To have so few military units is bad but to then lock some of them away is perhaps historically accurate, but it makes for poor combat.

Once combat is underway you simply watch the battle occur in real time. This requires and offers you the opportunity for no input and you’ll watch bars deplete leaving you with nothing to do but hope the enemy’s bar runs out before yours does. It’s rubbish. Still, at least there’s diplomacy to fall back on.

Sadly, this is also terrible. Diplomacy doesn’t just revolve around money – it is entirely about money. To make people like you all you need to do is pay them off. Throw some gold to establish trade routes. Trade routes get you more gold. With more gold you can convince them to not attack you or to attack other people. There’s no real sense of strategic allegiance, it’s more like buying friendship. 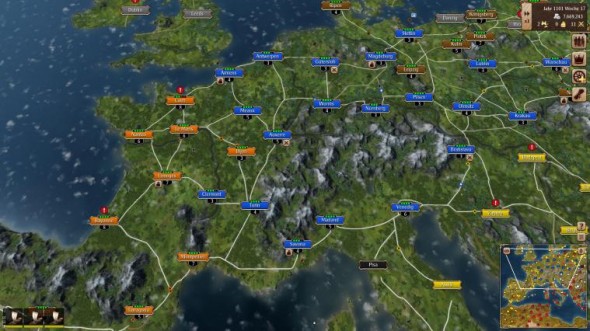 Living in diplomatic harmony. How interesting does this look?

That’s about it. During your time you’ll get random events like fires, plagues and famines, but these don’t change how you play, merely cause you to slow down on progressing in a game that’s already super slow. Another random event that seemed to occur far too often is bandits, wolves and bears attacking your traders as they endlessly trudge in a circle around the map. These attacks result in dropped money and resources – this means that your progress gets slowed down. You can then try and hunt down the source of these ne’erdowells, but it’s a painful and slow process. Tiny dots on the map turn out to be caves full of bears, minuscule specks are wolf dens and tiny blots are bandit camps.

Ridiculously, the biggest war I had was with wolves as a particular pack of vicious canines ravaged through legions of my best knights. It was boring, it was in no way tactical and it was… what’s the word I’m looking for? Ah yes – slow.

Grand Ages: Medieval sets out to do a number of admirable things. Honestly, though, it fails in all aspects and it fails not in a giant ball of flames but in a tiny puff of smoke. Less of a ‘grand age’ and more of ‘takes an age’.