Ever since I bought my very first Xbox with Halo: Combat Evolved in the bundle, I have been a massive Halo fan. It was the fiction that drew me in, that first game creating a universe I wanted to invest time in. Each subsequent game has added to it, and now with books, films and comics, the fiction has become massively fleshed out.

The latest release in the epic saga is Halo 5: Guardians, with a story that goes in unexpected ways and interesting changes made to the multiplayer. Not all of those changes seem to work, but 343 Industries latest game is still a fantastic shooter.

The campaign is set several months after the events of Halo 4. Master Chief has been reunited with fellow Spartan II’s, Fred, Linda and Kelly to form Blue team. Minus A.I. companion Cortana, the Chief does what he does best, but a mysterious message apparently sends him rogue along with the rest of Blue team. 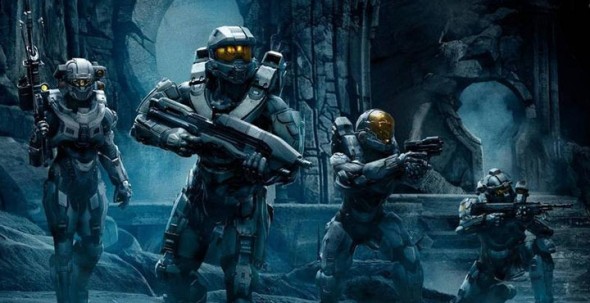 Master Chief has actual people to talk to now, not just a voice in his head…

Enter fire-team Osiris, led by Spartan Jameson Locke, who is tasked with bringing Blue Team back. Without getting too spoiler heavy, this is obviously not so simple and the shooting begins in earnest. The story is actually pretty great, with some unexpected twists and turns that intertwine with the extended fiction in a really great way.

On the flip side, while it does intertwine with the extended fiction in a really great way, if you do not follow the rest of the Halo fiction, and have just played the core games, some things in the story will simply not make sense. The Arbiter is engaged in a war, not with Earth, but with the Covenant. Why? Without reading some of the books you will never really know what is going on, same with who the hell Spartan Locke is and at least one member of his team.

There is an argument to be made that it makes little difference, and to be fair the story gets going and plays out quite well without this extra information. Being an uber-fan, however, meant I got far more from it than what is simply presented, which is worth pointing out to others who might like the story but not keep up with the extended universe. To be fair, this was the same with Halo 4 as well, so it isn’t exactly new territory for the series. 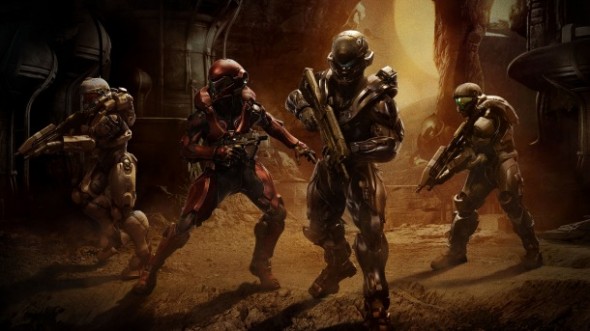 Who the hell are these guys?

The game does, however, play as well as it ever has, if not better. Switching between Master Chief and Spartan Locke makes little difference in terms of abilities/gameplay and only happens during set story beats. Both Spartans have the same abilities and can use the same weapons, in much the same way as Chief and Arbiter in Halo 2.

Weapons are varied and while some are very slight variations on the same thing, such as the beam rifle being the same as the sniper rifle being the same as the binary rifle. Some are very different, from the classic Needler or the new Promethean grenades. They are spread liberally around every level so, if you run out of ammo for one weapon, you can more than compensate with something picked up from a fallen foe.

Most levels simply involve running around and killing anything shooting in your direction, which has always been Halo’s way, but the A.I. is just as good as ever and will employ varied tactics to take you down, climbing aboard vehicles and turrets if necessary, which gives the sense of a real battle taking place. In other words, it is a Halo-ass Halo game.

The series has always had some of the most striking art design of any sci-fi series I have encountered, and this only continues with the latest game. The grunt of the Xbox One lets the game run at 60fps, making everything silky smooth and vibrant. The cut-scenes are stunning as well, again adding to the feel that this is a living breathing universe. 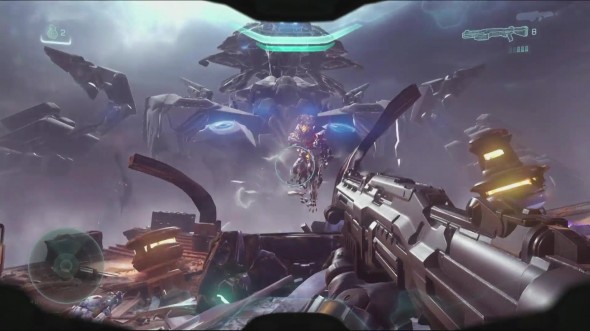 Voice-acting is top notch, with all previous actors reprising their roles. You might even recognise a few characters faces, as a couple have been mo-capped onto the models. The only issue with the sound is that I found the weapons feel a little… ‘muted’. They just don’t seem to sound quite as punchy as in previous games, but that is not to say they sound outright bad, just muted.

So, what else can you do in Halo 5? Well you can take on the campaign co-operatively with friends, replay it in various difficulties or head into the multiplayer suite. It’s in the latter where the main new addition has been added: Warzone. This mode allows massive battles between not only two teams of real players but also A.I. controlled enemies as well.

How this plays out is that the goal is to reach 1000 points scored. You can do this by killing the other team, taking objectives (capture the flag etc.), or destroying the aforementioned NPC enemies. At first, it can be a little confusing. There is so much stuff to keep track of that I just tried doing what I knew: killing the other team and taking objectives. Turns out, I was doing it wrong. By also trying to hit powerful NPCs, you can earn a lot of points and, if you get lucky, won’t have to deal with other players that are probably a little too good for you.

This mode is 24 player, 12v12 and, when combined with the A.I. enemies, that makes for a lot of bullets flying around; it is pretty intense at times. Not all the maps are brilliant, as a couple simply need you to hold the centre control point (generally a building), giving you a massive advantage that the other team cannot get around, because when they try and storm it, you have plenty of friends to repel them. 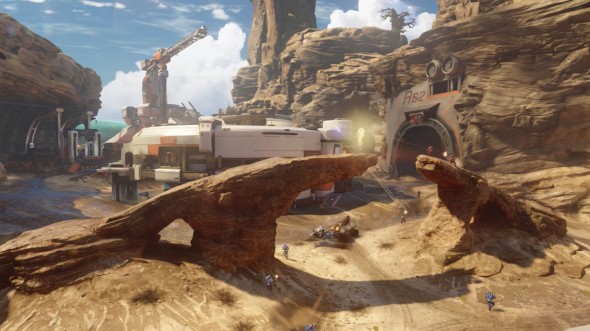 If it moves, kill it…

The other thing is that the NPC enemies are telegraphed when they spawn in, so rather than just being a part of the battle, they essentially become a collectible that shoots back. Having them already occupying the area, then having to fight them and the other team would help this mode a lot. This does happen at the start of the round so that you can get to the shooting fast; you have to clear out the control points of defenders before you can take them, but  once that is complete, you have to wait for new NPCs to spawn and it just feels… off.

That’s not to say that Warzone isn’t a great mode, it is, and has a lot of potential, but it could have been so much cooler. There is a variant called assault that removes the A.I. enemies and devolves it down to the tug of war of capture points, but due to issues with the maps, this proves frustrating on more occasions than it should.

Warzone also allows use of the other major addition to the game, Requisitions. These are card packs purchased via REQ points or real money that grant access to things the Needler, Warthogs, overshields etc. The real money part of this is how you take it, the game doesn’t shove it down your throat and simply playing will earn you plenty of cards.

The biggest problem is the fact Halo 5 doesn’t actually tell you how to use them. You buy and unlock them very easily, but at no point does it say how to actually use the cards you have earned. Once you get into a match, you can either die or use a req station to pick the cards, but I spent my first couple of rounds trying to work out why I couldn’t use them from the off. There is a timer you have to wait out to get steadily more powerful cards too, so you might have to wait an age for the one you want to become available. 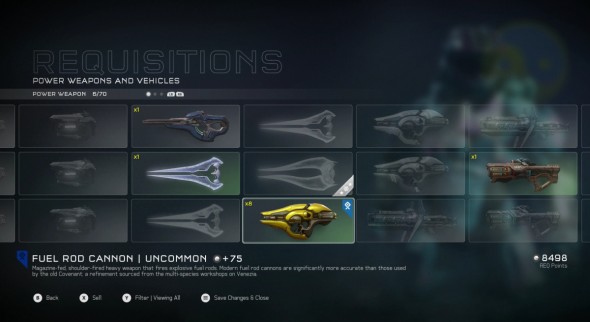 As any poker player will say, Cards = Weapons…

This means that you have to play plenty of matches to increase your level enough to be able to change your default loadout, while seemingly having access to the most powerful weapons from the start of the round. It’s a weird system, though it does mean that skill and time played win out rather than paying to access the best packs, I just wish it told you what was up in a better way.

The standard other modes are all here – Deathmatch, Slayer, Capture the Flag et al, and can be accessed easily. The req system isn’t in effect here, so this is the purest version of Halo multiplayer you get, but to be honest, Warzone is shiny and new so that goes a long way to making it the default mode for most.

Halo 5: Guardians is definitely worth your time and money. It plays brilliantly and has enough content that I never felt ripped off. The campaign is lengthy and, due to the sheer volume of multiplayer modes, I never found myself bored.

It stands that by following the other aspects of the Halo universe, the story makes much more sense, but not everyone is willing to do that and 343 Industries have wisely crafted a story that doesn’t outright require this knowledge. Fans will be much more into it than more casual players still, but as sci-fi FPS games go, Halo 5 is a great example and one of the year’s best.