Let me take you back to June 2008. Shane Warne led the Rajasthan Royals to victory in the inaugural Indian Premier League Cricket, Hilary Clinton won the democratic primary, the Australian army withdrew from Iraq and UbiSoft unveiled I Am Alive at E3. In the (near) four years since that reveal trailer made the world sit up and take notice, Spain have become football’s European and World Champions, the USA has elected its first Black President and the UK has seen a major Royal wedding and a Coalition government take to power.

It’s fair to say that I Am Alive has seen a relatively similar level of change itself in that time, going from what most expected to be a full retail release to a download only title. Even the main protagonist has had something of a change in look and feel (not to everyone’s taste).

It’s a game I’ve followed quite closely in that time and I am very pleased to say that the wait is almost over.

The question now is, was it worth it?

Alive and kicking
The world has seen a cataclysmic event that has almost wiped out all of mankind. It so happens that at the time of the event, your character was on a short trip away from home, leaving your wife and daughter alone. With nothing but your own gut feeling and hope to keep you going, you have managed to return to your hometown of Haverton by foot and are now trying to find your family.

It is within this fallen City that I Am Alive is played out. You must traverse across the buildings flattened by repeated earthquakes and through the tunnels and subways exposed by the holes in the roads, as you look to, firstly, confirm your family’s safety, and secondly, where on what’s left of the Earth they reside.

Hang tough
I Am Alive is essentially a survival horror game without the horror. You traverse what is largely a barren landscape, picking up the few remaining items of use left in the world. These will primarily take the form of Water Bottles, Soda Cans and Pain Killers that you can use to replenish lost stamina or health.

Stamina is shown in the top-left of the screen and is used by exerting yourself, which will primarily be as you run and climb across buildings or walk through the fog and dust of the streets. Stamina can be replenished by resting above the fog or indoors where there is no dust. If your stamina reaches zero then your stamina capacity will start to deplete until it too reaches zero and then; you die.

This is likely to happen as you’re just shy of reaching that next platform and, as such, you can perform an elevated level of exertion by repeatedly tapping RT to take that final step. It seems strange that this action is assigned to the trigger button and its one of my few criticisms of the game, as this exertion button is used in combat as well and is more than a touch unnatural. This can make seeing off a hostile group of survivors much more awkward than necessary. 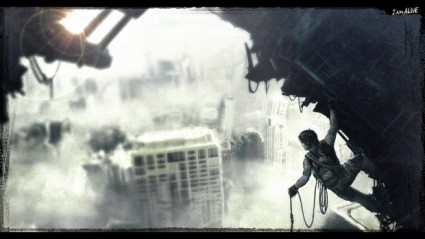 The other major element of the survival is your Health, which is displayed as a Red bar to the right at the top of the screen. Life is lost if you fall too far or are attacked and can only be replenished by taking some form of medication and again; if it reaches zero, you die.

These two elements are paramount throughout the game and you will need to choose your moments to climb above the dust or take a rest when scaling skyscrapers in order to stay alive. All the items you pick up along the way are added to your inventory, which can be opened with a simple tap of the LB button at any time to give you that little boost to get by.

A lot of your time spent within I Am Alive will be you, alone, fighting the elements rather than other people. Even when you do bump into other survivors they will often be happy to see you just walk by. Naturally, you don’t have to avoid conflict but with just a machete and an often-empty pistol, it pays to pick your moments to fight. Bullets are sparse to say the least but there is always the option of bluffing your attackers by pointing the gun at them with LT, even if you don’t want to use it.

You can fire with RT if you do have bullets or, when the gun is aimed, use X to order your foe to step back. This is a good technique as you can then use the landscape to your advantage, pushing people off buildings, down holes or into fires, but bear in mind that once you’ve played that card there is no turning back. Showing your hand too soon is likely to leave you lying in a pool of blood.

Hand to hand combat with your machete is where that awkward exertion button comes into play. You can take a single surprise attack if you time it right with X, but then X instigates a struggle kill, which needs you to repeatedly tap RT to overpower your assailant.

As these combat situations will often have you outnumbered, as soon as you enter into a struggle kill you are open to attack. You cannot block, you cannot change target and the kill is never particularly quick, often forcing you to use your bullets, which might then leave you short later on. 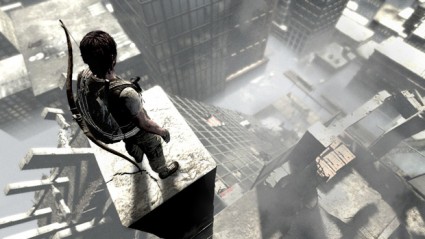 The other slight issue I have is that at times the camera can lose you a touch. This will usually be as you enter an enclosed area where you will be climbing or as you drop onto an outside ledge. It can leave you climbing in the wrong direction initially and, as your stamina starts to deplete as soon as you start climbing, you might be left short because of that initial error.

As you travel through the broken City you will also stumble across a few victims of the event that require your help. This will take the form of you giving them something, usually pain killers or medi-kits and in return you will get a retry (extra life) and some details as to what has happened in your time away and where the survivors, including your wife might be. There are twenty in total and they make up probably the most enjoyable “collectible item” I have experienced in any game. Unlike Intel items or Flags, you get an immediate reward for each one and they sit perfectly in the story as a whole.

There are also a few little puzzle elements to the game, as you might need to find a specific item and work out a specific route to get it to help a victim, or progress through a particular area.

Look like death
The overall look of I am Alive is a grey one. As you can imagine, from a world that has been plagued with earthquakes for the past twelve months and seen buildings flattened and roads open up, there is an enormous dust cloud that has turned the brightest colours into a distinct shade of grey. 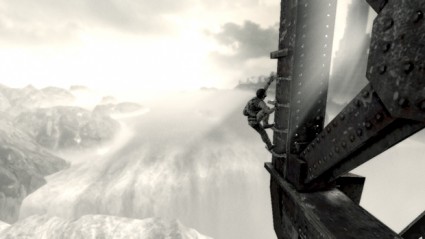 Haventon has a knack of making you feel small.

That is not to say there is no colour in the game, though, just that it is used sparingly and incredibly well. Some people’s clothing, a few of the cars littered around the streets and the occasional tree top break the grey landscapes and when they do, they add a very deliberate element of life. The key colours are in the fires that will often warn of impending conflict, as you enter a camp of survivors determined to protect their territory or in the crude signs that have been left behind and written, always, in blood red.

Lighting also plays a significant role as the closer to ground level you venture the darker the overall look and mood the game takes. Every so often there may be a break in cloud that lets in a few shafts of strangled sunlight just to remind you of what the world used to be like before the event.

The character animations are, in the main, incredibly fluid as our hero climbs, jumps or slides his way around the broken, derelict City swinging from improvised grapple points. Occasionally the combat lets it down ever so slightly, as it often feels staged and unnatural compared to the rest of the game.

Also worth pointing out is that despite the fog at lower levels, when you break above the cloud and take the time to stop and survey what has been left behind, the draw distances are huge. Haventon, both in spite of and because of the damage, is a quite beautiful Cityscape.

Sound of the undergound
Sound is also distinctly understated in the main part. A fairly calm and tranquil background tune plays throughout, pitching up a notch in tempo and volume when in a particularly dangerous situation. These primarily come from the moments of conflict or when your stamina is running low. 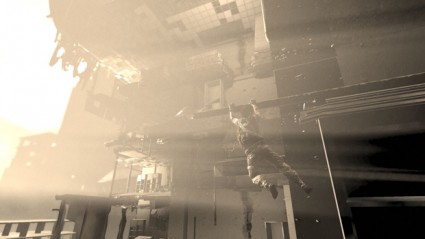 The voice acting is good without breaking any boundaries, although I did find Mei, the young girl who accompanies you on occasion a tad annoying with a take on the typical “are we nearly there yet?” routine.

When your life bar is low, your heartbeat becomes more prominent and voices of other characters become muffled giving the desired effect of disarray and the sound effects are also solid on the few occasions they are used, which in my opinion added weight to the firing of my gun in particular.

Alive and well
In discussing I Am Alive with a friend and trying to explain the flow of the game and the story to him, I received the following question: “but what do you actually do?”. I found an immediate response difficult to articulate. Essentially you will spend large periods of time simply climbing and walking, without seeing any other characters or making any really noticeable progress, other than to pick up consumable items. Yet every step is taking you deeper into the story and the City you find yourself in.

The “Survival” element is just a fraction of what this game offers, thanks to the puzzle elements, along with some good old-fashioned platforming and third-person shooting, later on in the game.

All I can say is that I have thoroughly enjoyed playing it from start to finish. I have every intention of going back and completing the story again to find the bits I’ve missed and explore Haventon a little further, and I only hope that I have managed to portray the game’s effect in this review.

I doubt there will be a more enjoyable game on XBLA this year, and I strongly believe that I Am Alive will also hold up against many full retail releases too. You simply have to buy it!