Ah LittleBigPlanet, I love this series. Overflowing with charm, fun platforming, and more significantly, the ability to fully create and share content; it was actually the first game that made me consider buying a PS3. I had to wait a little while before I got the chance to sink my teeth in of course, but it was more than worth the delay.

Being a PSP owner, I naturally followed the series over to the handheld, and despite lacking the processing juice of the PS3 original and the huge increase of scope that came with its 2011 sequel, I have to say that for me, LBP felt a better fit portably.

So that, coupled with the fact that the Vita’s software cupboard has been painfully bare these last few months (barring the excellent Sound Shapes), I’ve been eagerly awaiting LittleBigPlanet’s newest outing.

It’s finally here, and fans should not find themselves disappointed.

“We shall call you… Boysack!”
In LittleBigPlanet PS Vita, a new planet has appeared called Carnivalia. Home to the mysterious Puppeteer, Carnivalia used to travel around the universe spreading joy, but after one bad performance resulting in him being booed off-stage, the Puppeteer became a bitter and twisted man. Vowing revenge, he decides to kidnap all the Sackpeople to turn them into Hollows; faceless wooden foes. On investigating Carnivalia for himself, Sackboy runs into Colonel Flounder, who tasks him with saving the day!

Although not necessarily any more story-heavy than previous LBP games, I can say with certainty that this is the darkest and most twisted of the four, with themes and designs that could have come from the brain of Tim Burton, judging by their execution. The new characters are as oddball as you’d expect from LBP, only in this iteration they exhibit a certain sadness, such is the state their world is in. It’s a brilliant clash with Sackboy’s usual joyful exuberance. 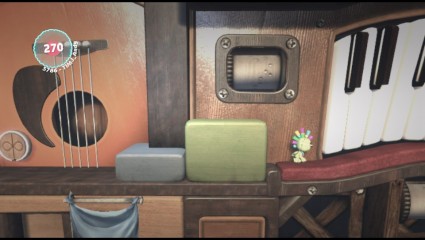 Yes, those instruments are interactive!

Bursting at the seams with improvements…
It’s fair to say that from a pure gameplay perspective, LittleBigPlanet PS Vita won’t harbour too many surprises in spite of huge improvements and some nifty new features. The handling still feels slightly floaty, the physics remain hugely important to gameplay, and it is still on a charm offensive on every single facet.

As usual, the campaign sticks to the series’ roots as a side-scrolling platformer, and it’s gloriously fun. It might not have the clinical design and sheer urgency of something like Rayman Origins; however, the imagination and wonder on display only further highlights how far behind New Super Mario Bros. 2 is when compared to its new-age contemporaries. LittleBigPlanet PS Vita is a veritable master-class in comparison.

Unlike with most of the Vita’s software, the console’s unique capabilities never feel forced in their implementation. Blue blocks can be freely moved around with via the front screen, allowing you to modify the path ahead of you. Likewise, green items can be pushed forward by touching them from the back touchpad, working smoother and easier than in the likes of Escape Plan (in its original state, anyway); or you might even need to use your fingers to catapult your Sackperson into the air to reach higher ground. All these actions feel natural to perform and never irritate.

Power-ups make a welcome return, offering jetpacks, grappling hooks, scuba gear and Zelda-style Powergloves, allowing your Sackperson to navigate Carnivalia’s many challenges. New is the projectile-firing helmet, dubbed the Odd Rocket by one of the game’s early characters. You can fire this by dragging from Sackboy’s head towards your target and letting the rocket fly, or you can draw a path to your destination and the rocket will follow. Again, smart use of the touchscreen.

In some levels, you will find a key that will enable access to one of many accompanying mini-games. These include a quasi-decent Bust a Move clone, racing games, a tower building game that takes some mild inspiration from Tetris, or a Whack a Mole Sackboy game. These are fun little asides that act as an example of what’s possible in the LBP creation tool besides platforming, but success can also bag you new items and stickers. Some of these are also two-player games, such as air-hockey, allowing you and a friend to play together on the same console by grabbing an end of the Vita each.

Progress in the campaign will also open up The Arcade, and in here you’ll find some separate games that aren’t just side-missions; they’re almost full mobile-quality games in their own right. My personal highlights from this available quintet are Retro Vector, where you must rescue astronauts while safely navigating your ship through ten different levels; and Tapling, a surprisingly stylised little platformer that falls somewhere between Limbo and Mutant Blobs Attack.

It’s arguably the creation element that’s seen the largest improvement thanks to the Vita’s touchscreen controls. While much of the creation system remains ostensibly the same as in previous iterations, the ability to finger-paint your desired shape directly onto the screen makes things a lot easier; as does the multi-touch ability to expand, shrink and rotate your objects and place them wherever you want. Ditto for selecting and grouping items, while making custom stickers and sound bytes are so much easier thanks to the Vita’s camera and microphone.

If there was one complaint, it’s that there’s still a lot to take in to get the best out of it. Although there are a ton of tutorials included, they can be a bit of a chore to get through, spanning a few hours’ worth of interactive labs and video guides. The annoying thing is that you don’t get access to every tool off the bat either, until you go through the relevant tutorial. So even if you’re a LBP veteran, you’ll need to run through a few of the labs to get what you need. Thankfully, these tutorials are readily available wherever you are in the game, so you can get to them quickly and easily at least.

The sheer thought of what’s possible in Create Mode is not only mind-blowing, but it can also be choking. I had endeavoured to have a TIMJ-themed level ready to accompany the review, but every time I start work on it, I find myself paralysed by choice or overwhelmed by the realisation of something else I didn’t realise was achievable… I’m still aiming to create something, so I’ll update later.

Despite that, LBP remains a hugely powerful and unrivalled creation tool, made all the better with the Vita’s features. 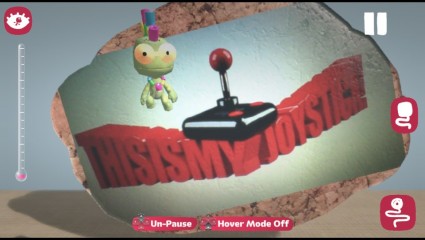 This is as far as I got on our TIMJ level before I was paralysed through choice!

I can see your stitches!
LittleBigPlanet on Vita is truly one of the best looking games on the console, period. Not only is it utterly charming and obscenely rich in detail, but every single visual effect makes it come to life. This is true of the stock levels especially, with an amazing amount of moving parts that create an almost organic feel. Surely a tough thing to achieve when your design toolset involves otherwise inanimate materials?

Of course, with the creation tool, the visual design isn’t just up to the developer, but also the community, and it’s a game that brings out great imagination in this respect. More on that shortly…

Why does Stephen Fry hate his cat?!
Once again, the legendary Stephen Fry returns for narration duties and his lucid tones capture the right amount of personality and humour, with a little bit of snark thrown in here and there for good measure. The other in-game characters flit between fully spoken English and cute gibberish, but every spoken word is registered with great charisma and enthusiasm. It could almost match the quality of any animated movie out there.

The one area where it’s not as strong as its forebears is in its soundtrack, missing the iconic, happy vibe synonymous with the series. That said, as it’s something of a darker instalment for LBP, they have managed to make up for it in other ways. Marianne Noisette’s world, as a quick example, has themes and events not unlike that of Alice in Wonderland, and the accompanying track somehow manages to sound aptly beautiful and creepy at the same time.

Create, share and play!
Obviously, the ability to share all you create is a massive part of LittleBigPlanet’s appeal and that hasn’t changed on Vita. While you can upload all you create, even if you’re not the creative type, the community offers you a potentially endless supply of additional content, made by people just like you. You can rate, recommend and even download these for offline play, should you like any of them enough.

Recently I played through Sound Shapes, and although I adored the game as a whole and was particularly impressed by its level editor, I did come away a little disappointed by the general quality of player-created levels. That’s not a criticism that I can level at LBP, though.

I’ve jumped into around ten user-created levels prior to penning this review and while some are understandably better than others, I’ve at least come away with fresh ideas or inspiration for something I want to try for myself. That’s the game’s beauty; it’s a bubbling cauldron of creativity, and everything you upload could spark someone else’s creative genius. It’s a heartening realisation.

Away from that, it’s possible to play most of the game with up to three other players. The online integration is seamlessly woven into the campaign too, especially useful since some areas in levels require more than one player. Once you’re signed in online and head to campaign menu, an indicator tells you exactly how many people are currently playing that level themselves, and you can join in with these folk with one button press. While I encountered no lag in playtesting, I did have the odd connection issue. 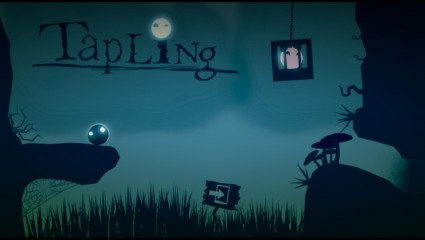 The Arcade has some surprisingly complete games, such as Tapling...

Is it a ‘patch’ on the previous games?
LittleBigPlanet PS Vita is precisely what the console needs at this point in time: An amazing, AAA game that’s enhanced by the console’s unique feature set, not burdened by it. As a package, it’s overflowing with great content; a solid campaign, arcade modes and a powerful creation kit all hit their marks, while the community features provide an overwhelming supply of levels and games for you to experience and be inspired by.

More than worth the asking price.