I’m not exactly sure how I’d never tried one. I remember reading games mags back in my youth and marvelling at the idea of Super Mario RPG (a SNES game that unfortunately never made it to English shores), and I’ve had plenty of opportunities with the likes of Paper Mario and the Mario & Luigi series taking plaudits for years. More fool me for not taking the plunge sooner, as my recent experience with the newly-released Mario & Luigi: Dream Team has been nothing but positive.

Hold onto your Red n’ Green hats for a newcomer’s perspective into the Mario & Luigi RPG franchise!

The land of nod

Princess Peach finds herself invited on a jolly holiday to the island of Pi’illo. Intrigued by the invitation from the mysterious Dr. Snoozemore, Peach wastes no time in rounding up her loyal subjects (including Mario and Luigi) and whisks them away on her royal airship. During the journey, a very sleepy Luigi has a vivid nightmare that their airship is being attacked by a mysterious force, but the threat is swiftly and easily dispatched by he and his brother. Eventually arriving safely on the shores of Pi’illo, however, all is not as it seems and Dr. Snoozemore is actually away on one of his regular excursions.

In the confusion, Peach (predictably, although the game does make fun of this often) gets kidnapped by the purple creature from Luigi’s dream. He is revealed as Antasma, a magical being that is seeking to use Peach’s power for his own means, and he drags her kicking and screaming into the Dream World. Using Luigi’s amazing ability to sleep at any time regardless of the circumstances, Mario finds that he can enter the Dream World via portals into Luigi’s dreams and mounts a rescue.

In doing that, however, he leaves the door open for Bowser to follow him in. It transpires that Mario and Luigi aren’t really his focus, as Bowser is only irked that another villain would dare to kidnap Peach; it is his gig after all! After being promised greater power by Antasma, though, he has a swift change of heart and jumps at the chance to team up with this new threat.

Mario manages to escape the Dream World with Peach, but can they keep her safe and save Pi’illo Island?

I honestly wasn’t expecting too much from Mario & Luigi: Dream Team in terms of its plot, but I was happy enough to find a quirky, pleasant tale that stayed interesting throughout. Full of interesting characters (both old and new), with a great sense humour and charming dialogue, the game exhibits a delightful self-awareness throughout that ultimately leads to its best moments. 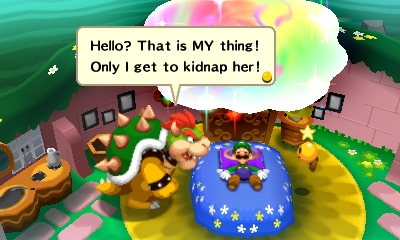 Sexist Bowser’s none too happy…

It won’t send you to sleep
So, as I gather from research, Dream Team is pretty damn similar to its predecessors, though to those that haven’t had the pleasure (like me), it’s pretty much a classic-styled, top-down JRPG. You’ll be exploring the many areas of Pi’illo Island, fighting foes in turn-based battles to level up, solving puzzles and running errands for the good townsfolk. It isn’t just an old Final Fantasy game in Mario’s clothing, however, as it seems this series has a few neat tricks and a personality that is totally its own.

For one, the turn-based battle system is one of the most interactive I’ve seen in the genre, with the ability to nearly always dodge or counter enemy attacks. As a quick example, charging enemies can be stomped if your defensive jump is timed properly, while flying enemies or projectile attacks can be sent flying back using the hammer.

Getting the best out of the Brothers’ attacks also requires careful timing and a steady hand, even down to their most basic moves. The stomp allows for a second hit if a sequential button press is nailed at the right time, while their hammer attack requires the button to be held for just the right time-frame to deal maximum harm. Hold it too long, however, and you’ll see very little damage done at all.

It’s the brothers’ own unique special attacks that require the most skill, though, all of which use specific mini-games to determine the attack’s failure or success and also the maximum damage dealt. For example, Luigi’s helicopter attack sees you tilting the console to steer the device towards one brother then the other to pick them up, before aiming a huge target over your chosen enemies from above. One has you rebounding a shell repeatedly against your target before hitting them with a super powerful finisher; another has the duo playing baseball with bombs. There are plenty of these attacks for each brother, and they’re all a lot of fun to master.

Fights in Luigi’s dreams, however, play out a little differently. Mario fights alone for starters, but his standard attacks and stats are bolstered thanks to Dreamy Luigi’s help. The Bros. attacks are also replaced with ‘Luigianary attacks’. These moves see Mario summon a horde of Luigis that can be used in a number of ways devastating to the enemy. Imagine a huge hammer made of hundreds of Luigis, or building up a rolling boulder made out of Luigis, Katamari style, before smashing it into your foes. There are, again, plenty of these assaults on offer as you earn them through gameplay (by collecting ten Attack Pieces in each unique location), and the short mini-games for each are consistently fun.

It’s not only the combat with which Dream Team shakes up its own setup, as jumping into Luigi’s dreams switches gameplay from top-down RPG to 2D platformer. It’s not quite SMB as you know it, still requiring a lot of exploration, turn-based battles and some gentle puzzle solving; but the change certainly offers up a nice change of pace. 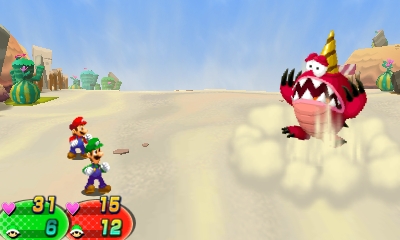 In most JRPGs, battles are a relaxing element. Not here.

To reach all areas in either dimension, the Brothers need to learn some additional skills along the way. When out and about on Pi’illo Island, the pair will acquire abilities that allow them to bounce to higher ledges, float across gaps or spin through certain obstacles, and thus open up areas that were previously gated off. For example, once the pair get their hands on some hammers, Luigi can also hit Mario with a hammer from behind to knock him underground, or make him small enough to fit through small spaces to collect items or hit vital switches.

In the Dream World, this exploration element gets even more interesting as Dreamy Luigi can fuse himself with the environment in different ways where required. In early examples, he can become a tree whose branches you can use to flick Mario to higher levels, achieved by manipulating Luigi’s moustache on the bottom screen. In other scenarios, Luigi can transform into a cloud that can blow distant items forward after causing real-world Luigi to sneeze. Another power lets you change the direction of gravity by spinning Luigi on his current bed via the bottom screen; there are some truly clever interactions here and I won’t spoil them all.

All these cool powers and abilities, regardless of whether they’re for combat or exploration, are given to you at perfectly timed intervals. With this, the game never feels like a one-trick pony or that you’ve seen everything it does too early; there’s always a surprise lurking around the next corner, something new to keep the gameplay feeling fresh.

While the standard boss fights are certainly a blast, I was surprised by the Giant Battles in the Dream World. Forcing you to turn the console onto its side to use both screens as one, Luigi will grapple with huge enemies, Godzilla-style, in fights controlled entirely with the touchscreen. While the outcomes are pretty much determined by choosing the right attacks when given the opportunity and dodging and countering the best you can, they’re an enjoyable spectacle when they happen.

If I had one real complaint, it’s that Dream Team probably drags things out that little bit longer than it needs to. The 50-something hours leading up to the finale seemed to fly right by, but at the death it’s easy to feel like the game is arbitrarily blocking your path to the final fights for the sake of drawing things out. This stop-start nature meant that I found the end stretch a little more frustrating than it probably needed to be. 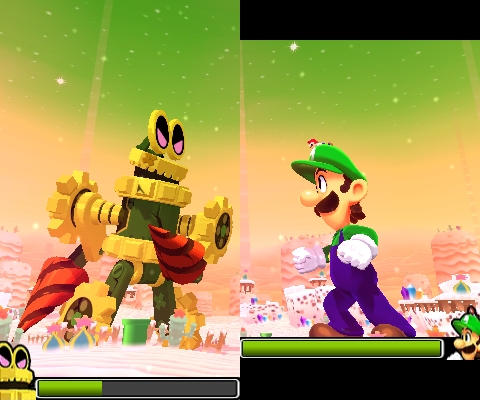 When two become one… screen that is.

A different perspective
Rather than a 3D-rendered adventure game, Dream Team retains the sprite-based design of previous entries. Despite not seeing this franchise in action before, I was surprised given the 3DS’s power over the older formats but it’s hard to deny the end result; the game looks fantastic regardless. It’s pure Mario too, with lovely, vibrant colour filling every millimetre of the 3DS’s dual screens.

The 3D effect is pleasing but very subtly used for most part, only really playing a factor in Bros. or Luigianary attacks where motions see the Brothers rush into the screen. Otherwise it’s simply a fair display of field of depth and nothing more.

Mr Sandman
In the difficult balance between character-based fan service and striving for something approaching new, Dream Team’s soundtrack straddles the line brilliantly. The classic Mario theme, for example, appears only periodically throughout, but is deftly and softly used to the point you’ll barely notice it. When you do, it’s certainly cause for smiles.

The original scores are used well; wonderfully upbeat in the friendly towns or becoming suitably epic when the tone requires it, and it’s all catchy as hell too. The battle music was my highlight in that regards, still to be found ringing around my head from time-to-time as long as a week later.

Dreamland or Dream on?
Despite my slight frustration at the obvious game-lengthening right at the end, Mario & Luigi: Dream Team is an easy recommendation for both Mario and JRPG fans alike. Its substantial, charismatic campaign is constantly a delight throughout, and the way it continually evolves, springing new things at you right until the credits roll means that it also rarely bores.

In fact, the single biggest compliment that I can pay to Dream Team is in stressing just how quickly the majority of the hours I spent with it seemed to fly by. Hours really do feel like minutes with this lovely little time sink.