As a fighting game heavily aimed at hardcore Naruto fans, Ninja Storm Revolution is hard to get into for non fans. Yet, some perseverance reveals a fun, if limited, fighter.

I’m a bit of a fair weather anime fan and don’t really watch a lot, as such although I’ve heard of Naruto, I’ve never actually seen it and know nothing of its storyline or characters.

So it was with some trepidation that I approached Naruto Shippenden: Ultimate Ninja Storm Revolution.

Revolution is, at its heart, a fighting game. It comes with an astonishing roster of about 100 characters, and they all have some very nicely realised anime-style graphics. In fact the graphic style is one of my favourite things about it; it’s very bold and colourful, and you truly feel like you’re part of an anime movie.

Combat happens via arena style battles with the camera positioned in a kind of ‘over the shoulder’ view, and it’s very reminiscent of Power Stone from the Dreamcast days. This was a game I absolutely loved, mixed with a touch of Super Smash Brothers. Like many fighters, you aren’t restricted to one character and can add two as backup. However, you can’t directly control the other two, just call on their abilities to help you out.

Revolution is itself is split into three distinct modes, two of which are kinds of story modes, with the third being the standard vs. mode that is a staple of any fighting game. 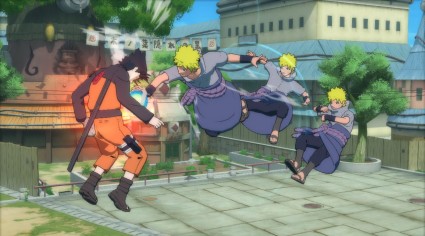 Each story mode is a series of battles separated by a short story movie. The movies were entertaining, but I realised quite quickly that my lack of knowledge in the franchise was hampering my ability to understand much of it.

Fights pretty much play out the same way regardless of the mode you’re playing in, though. Each team starts with 1000 orbs, hitting an opponent transfers some of these orbs from them to you, depending on how powerful the strike was. At the end of the match, the team with the most orbs wins. The controls are very much like a standard fighter and each character has a special attack, although these tend to be more ‘button mashy’ than the equivalents from say, Street Fighter.

During the fight you can call on one of your team and use their abilities. These abilities mostly take the form of some kind of super attack and each one requires some time between uses to recharge.

At the end of a fight, you are given a score based on how much damage you caused. This score is quite important because it affects how much money you get to buy things like health potions, which can be critical in some of the later battles. 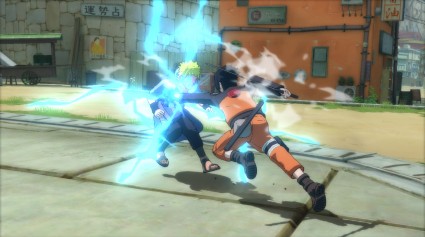 Although not a fan of the franchise, I love this art style…

As you progress through either story mode you get the chance to unlock more characters from that giant roster. After unlocking them you can use some of them in your team by replacing one of the existing members.

As well as the story modes, the ‘Battle Mode’ allows you to play against the A.I. or both online and offline friends. Whilst this mode is initially fun, it also revealed my biggest issue with Ultimate Ninja Storm Revolution. Once you get through the plot and to the meat of the game, it’s a fun fighter but it lacks any of the strategy of its better known big brothers. Most matches become a button mash pretty quickly and, without this depth, there really is no compulsion to play it after you’ve battled through the main modes.

Naruto Shippuden: Ultimate Ninja Storm Revolution is a hard game to peg down. If you’re a diehard fan of the series, then this is probably a definite buy; it’s not a bad game and the story modes truly feel like you’re part of the series. The second story mode, with its unseen footage and new storyline will especially appeal to the faithful. If you aren’t here for the franchise, though, and just want a fighter, then you’d be best served choosing one of the more traditional games. The lack of a robust block and counter system makes combat a fight for who can press the buttons faster, and the lock mechanism used to target opponents is sketchy and unreliable.

I enjoyed my time with Ultimate Ninja Storm far more than I expected to, though. It’s not a game I’d hold on to and keep going back to, but I also don’t feel like my time was wasted. I loved the art-style and the gameplay is fun while the story lasts. Talking of the story, although I didn’t understand the vast majority of it, I still consider it to be one of the more realised storylines in a fighting game. I realise this isn’t saying much, but it’s enjoyable to watch and does a good job of breaking up the battles.