Teddy Bears are the absolute symbol of childhood innocence. Soft, cuddly, harmless creatures stuffed with fluff and designed to be cuddled to sleep every night by a loving child, right? While that may be the case ninety-nine times in a hundred, there is always an exception to the rule and that exception goes by the name of Naughty Bear.

Naughty is the polar opposite of what you expect from a Teddy Bear, with a penchant for breaking everything he sees, scaring his kin and killing everything in sight with the aid of everything he can find. In fact, Naughty takes so much pride in torture and violence that he could be confused for the lead in the latest Tarantino movie or worse. The Killer question is how much fun can you have with a cuddly toy?

If you go down to the woods today…

You take on the role of Naughty, a teddy bear with a wicked side and a bone to pick. All the other bears have gone on holiday to the beautiful Paradise Island and decided to leave poor Naughty at home. However, not wanting to miss out on the fun and being something of an evil mastermind, Naughty manages to stow away on the bottom of the bus and is now hell-bent on revenge.

One by one, you are tasked with wiping out the very bears who snubbed you by Defluffing them in a variety of inventive and unique ways.

Bear hugs
Initially, you’ll only have a couple of targets available and, as you take each one out, another is unlocked. Before selecting your target you get to kit out your bear with a variety of outfits and weapons that you unlock as you progress through the game. The outfits range from a naked bear and various different moustaches to a selection of outfits, which you can mix and match to your heart’s content. Weapons are also pretty varied with Knuckle Dusters, Baseball Bats and Machetes just a few of the options available. 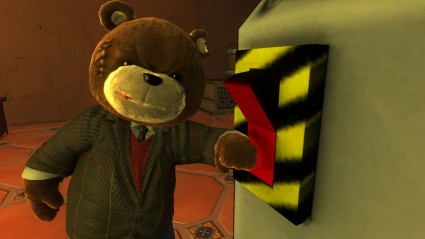 If ever there were an evil grin...

Each kill and naughty deed you perform with a specific outfit or weapon gets you XP on that item, and there are XP bonuses for mastering each one. These are then used to level up Naughty Bear across the usual areas of Health, Stamina, Armour (defense), Damage (attack), as well as Insanity, which gives you a power boost to inflict more damage. Finally, Regeneration, which is the speed in which your health recovers when hit.

Aside from the main target, there are several additional objectives on each level which will usually take the form of collecting a certain amount of coins, gathered by killing and breaking things, or destroying invites that are found lying around the level. Completing the side objectives will earn you more XP to level up Naughty. At any point you are able to leave the level to bank the items and XP you have earned to that point. This is something you need to seriously consider as, if you are killed, not only do you lose all those items and coins, but you will also be punished by having a massive seventy-five percent of your XP stripped.

NB:PiP  is something of an action adventure game, as you move from the cover and protection of woods to attack the bears around the level. Attacks are of the light (X) and heavy (Y) variety, and you can block your targets attacks by holding RB. In addition to these standard attacks, you can scare bears by holding LT or grabbing them when they are not expecting it with A. Once grabbed you can scare with LT or kill with RT. To add even more variety, if you drag a grabbed bear into the woods you can steal their costume to act as a disguise, allowing you to walk freely among your potential prey and pick the best moments to scare or attack.

All these actions add to your XP, and you can also use the various items and obstacles around the level to perform object kills. This could be pinning a bear to a cactus or feeding him to the sharks. Items can be sabotaged in exchange for coins and, when sabotaged, bears will often go and repair them, leaving them open to attack. The harshest of of all, though, is attacking a bear until he’s injured, chasing him around and scaring him, making him witness attacks and kills until he goes mad and kills himself. 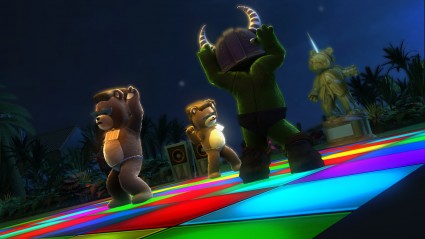 They deserve a good kicking for wearing those pants

Standard kills will give your equipped weapon the biggest XP boost but will earn Naughty himself the least XP. Object kills work in the opposite way, giving you yet more decisions to make as you go through the game. All these decisions add up to a wealth of variety in how you play each level and build your XP, which, in addition to everything mentioned already, earns you a trophy when you leave the level. From ‘Wooden Spoon’ for failing, to ‘Platinum Cup’ for perfecting the level, NB:PiP has as much replay value as you are likely to see in any XBLA title currently available.

Bear wars
Within the menus and presentation screens, NB:PiP has a fairly gritty, adult look, which is delivered by hand-drawn visuals and a kind of sketchbook feel. This follows into the upgrade screens and even, to a slightly lesser degree, the level select screen. The hand-drawn effect also carries into the load screens, which are interactive with a nicely sketched animation of Naughty throwing knives at a constrained victim every time you press the X button.

In the levels though, the game takes on a more standard, platform style appearance with what come across as more cartoony, softer visuals that have rounder edges and vibrant colours. Obviously this fits the Teddy Bear’s Picnic side of the game, but personally I preferred the more rugged, darker look to continue throughout.

The levels themselves are quite varied in size and offer some variation in scenery, without ever really veering from a fairly standard design. The bears are generally well animated with smooth movements overall, while also carrying themselves in a manner that befits a cuddly toy. Again, helping the overall feel of the game.

Disappointingly, I have noticed a few drops in frame rate when surrounded, and occasionally the camera can get a bit confused when you’re placed in a corner or to the edge of the map area. It’s frustrating, sure but for me it’s not a deal breaker. 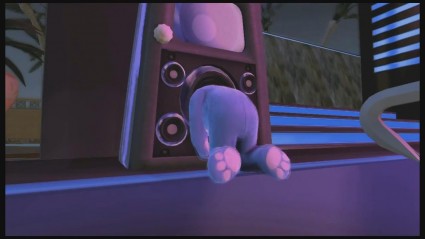 Bubbles was really getting into the TV...

Boo
Audio is quite subtle overall, with a nice little background ambiance that sits somewhere between kids TV and a rather spooky old ghost story. The tone here is superb for the atmosphere, but unfortunately it is only really apparent in the menus rather than the levels themselves. The sound there was a bit of a disappointment.

Naughty himself has a very worrying “Boo!” that initially makes you think of a strange old man in a trench coat, late at night in a park or dark alley. The voice-over man that gives you your targets and provides hints, is pitched perfectly as a slightly over excited Kids TV presenter, who I have to say made me chuckle more than once or twice. Hi everybody. I want to tell you a little about Tramadol. My family had to get acquainted with it on https://www.mbhci.org/tramadol-ultram/. My husband’s mother was sick with cancer of the rectum, the tumour was malignant. Yes, it was the last degree – the fourth one… Every day was unbearable for us, as the pain was accompanied by constant screams and groans. We pricked simple painkillers, but the effect was only for 2 hours and again permanent moans seized her. The time has come when it was all so insufferable that we pricked Tramadol. After that, sleepless nights are over and mother-in-law sleeps calmly. Tramadol takes away the pain for 12 hours and then again for my shot. It helped hugely in such agony.

“Honey-Cola” anyone…
Despite there being no actual multiplayer outside of standard Leaderboards, I simply had to include this section of the review thanks to a couple of entries in the game manual for multiplayer fun. What you have here, is two well thought out drinking games; Naughty Bear Face Melter and Daddle Do.

The former requires a minimum of two players each with a “Honey-Cola” and a small glass of “super concentrated Honey-Shot”. Taking it in turns you play the same level, and every time the play kills a bear, everyone else drinks their Honey-Cola. If they successfully take out the target properly, then all other participants drink their Honey-Shot. If the player dies, he drinks his Honey-Shot. 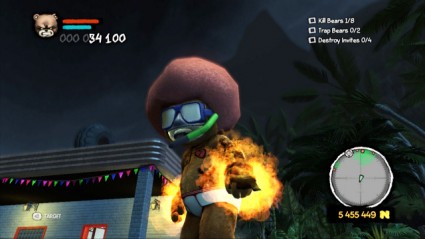 The second game requires each player to have a glass of Honey-Cola and to prepare a “Goblet of extreme naughtiness” by mixing some of each player’s Honey-Cola. Starting with the oldest player, you have to go into the level and kill as many bears as possible. Each kill forces the watching players to drink. The watching players must shout “Daddle-Do” followed by the name of the victim before it is displayed on the screen. If correct, they take control of the game and the current player drinks, but if they get it wrong they have to drink the Goblet of naughtiness. If nobody calls Daddle-Do, all participants other than the player have to drink.

These two games alone tell you about as much as you need to know about NB:PiP and, while I haven’t managed to talk a group of friends into popping round for a game yet, I am working on it…

Naughty or nice?
I think it’s safe to say that Naughty Bear: Panic in Paradise is the single most politically incorrect game I have ever played, and for that reason alone it won’t be to everyone’s tastes. I’m also not going to pretend that it is not without its flaws, especially in the graphics department, though at no point during my time with the game have these glitches ruined my experience or even caused too much hassle in-game.

What matters, though, is this: If you are prepared to take NB:PiP for what it is; a simplistic, casual affair with some genuine laugh out loud moments and huge replay value, then you might not be able to help but be taken in by its devious charms.