It took a while to get going, but the 3DS finally has decent momentum thanks to a steady drip of releases that’s kept its users, including me, extremely happy in recent months. Some would probably argue (successfully, I might add) that the momentum began late last year, with the release of the excellent Super Mario 3D Land. Its critical and commercial success meant that Nintendo would be utterly stupid if another Mario outing wasn’t far behind.

Rather than rushing out a direct sequel to 3D Land, Nintendo decided to return to their ironically named ‘New Super Mario Bros.’ series, which  debuted on the original DS in 2006 and saw Mario return to the classic 2D side-scrolling of yesteryear.

New Super Mario Bros. 2 is now upon us on 3DS. Is it worth your gold coins, or even the effort to collect them?

Kid-kidnapping
The fruits of Bowser’s loins from Super Mario Bros. 3 are back once again, and the irrepressible little scamps have taken a cue from their father and kidnapped the fair Princess Peach. Mario (and Luigi, if you’ve got a friend with a copy of the game locally), must once again take on all the Mushroom Kingdom has to throw at him, and rescue his beloved.

A set-up so obvious and so expected that it typifies the problem that hampers this particular Mario game more than any of the prior recent efforts. 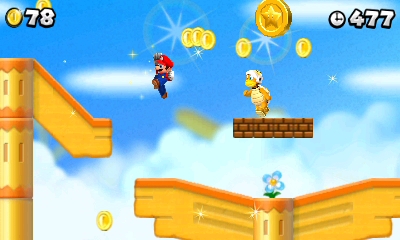 Back to 2D platforming!

A solid one-trick pony?
I don’t think I’m alone when I say that I was a huge admirer of last year’s Super Mario 3D Land. While that certainly made a point of exploring old ideas, it came across as an apt celebration of all things Mario; a fitting tribute that was almost impossible to play without a foolish grin creeping across your face. New Super Mario Bros. 2, on the other hand, feels like a game cynically going through the motions.

This is a classic-styled 2D platformer. Mario travels from left to right, sometimes upwards, avoiding and stomping on enemies as he goes. As far as his repertoire goes, it’s ripped right from SMB3, with Racoon tails, Fire Flowers, aaand that’s about it. Of course, there are some variants. You can occasionally earn gold-flavoured versions of the standard power-ups, and these are ridiculously overpowered, making them hugely fun to rampage through a level with. The gigantic Mushroom that makes Mario the size of the screen also returns, letting you stomp Godzilla-like, destroying everything in your path.

As with 3D Land, the base game gets progressively more challenging, but it offers a couple of ways to get beyond that annoying level if you’re struggling. The first is in the sheer amount of extra lives that it throws at you from a combination of coin collecting, random block breaking and the Toad bonus games that appear regularly on each world map. I was barely 30% of the way through the game and I already had 50+ lives, and even when I’d felt that I’d died excessively in one level, I’d often still finish it with more lives than I’d started with. With the frequency at which the game spits out those green mushrooms, I can’t help but feel that they wouldn’t have been missed if they’d just done away with the extra life system altogether.

The other specific feature that returns from 3D Land is where you will be offered an entirely optional ‘white’ power-up if you fail a level too many times. I think that while a little patronising, it’s still a decent way of helping less-skilled players along where they might otherwise quit. Whether you decide to take it or not, it’s no free pass; you still need to beat the level and while enemies can’t kill you, falls certainly can. 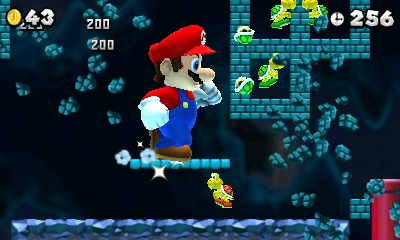 The other hugely touted facet of NSMB2 is the race to collect a million coins. Every coin you collect is logged and goes towards this grand tally for an eventual reward. I’ll be honest, I haven’t reached this figure in playing for review, haven’t even come close, and I doubt I’ll ever bother to try; it’s just not the sort of task that appeals to me. Don’t get me wrong, collecting coins is almost as addictive as it was in 1985, and I’m sure many will enjoy going for that target. It just doesn’t float my boat.

It’s hard to deny its prominence and Nintendo’s will for it to be a major part of the experience, though, as there are coins everywhere. It’s hard to jump and not hit coins. There’s even an occasional power up (a brick helmet) that can be acquired after emptying a coin-carrying brick that produces coins with every single move you make. There’s also a switch that sees enemies produce additional coins out of their backsides as they move. Again, this leads us back to the game showering you in 1-ups…

Once you’ve completed a world, you’ll unlock it for use in Gold Rush, a new separate mode that further centres on coin collection. You’re given three random levels from your chosen world, one life, 100 seconds on each, and you must collect as many coins as you can in the given time without dying. This is purely a score-attack mode, but one that’s hampered somewhat by the lack of online leaderboards.

The game also includes local co-op, although without a friend with a copy of the game, I was unable to test it for myself. I couldn’t help but feel that this is one of those times that the much-underused Download Play could have been a useful feature, especially in lieu of online co-op.

The main problem with New Super Mario Bros. 2 is that while it has quality as a standalone game, this is probably Nintendo at their least imaginative. Nostalgia is fine, of course, 3D Land was fuelled by it; but it at least still managed to make things feel fresh, presenting that nostalgia in ingenious ways. NSMB2 is simply everything you experienced in the 80’s and never anything more. It’s true, the formula still works, but given the Mario games that Nintendo have brought us since the mid-80’s, the sense of wonder and imagination that each brought is sorely missing here.

It was telling for me that 3D Land managed to hold my attention from the moment I started until the moment I’d finished it, but there were definite moments in New Super Mario Bros. 2 in which I found myself bored and apathetic. 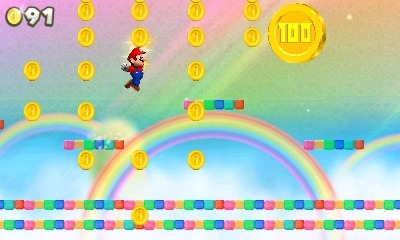 Sometimes you get the impression that there are more coins in the Mushroom Kingdom's air than actual Oxygen...

Bright n’ bubbly!
With the typically cute and colourful design that Mario has carried his entire career, it’s hard to deny that NSMB2 is anything but a elegant looking platformer, especially on the 3DS’s brightly lit dual screens. That said, once again, everything contained in each level is old news, and at a glance, you’d be hard pressed to tell the difference between this and the original New Super Mario Bros. on DS and its subsequent Wii iteration.

The use of 3D is a tad disappointing also, especially after the gameplay-enhancing outing of 3D Land. True, depth into the screen is obviously going to be lost in transition from 3D platforming to 2D platforming, but 3D could have been used to better effect.

It’sa meee, again!
All the usual themes and sounds are present once more, although remixed slightly. Some, I might dare suggest, could even sound at home on Rayman Origins, such is the sickly happy vibe the game tries to instil. Charles Martinet returns as the voice of the portly plumber once more, and yeah, it’s Charles Martinet; you know what you’re getting. 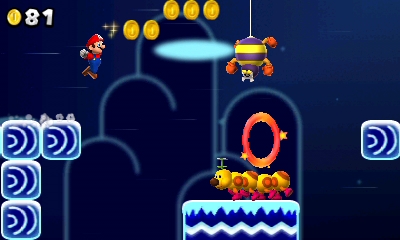 Hope that Mario's not an arachnophobe...

Not much in the way of magic?
While I can’t deny that New Super Mario Bros. 2 is a decent little platformer, that’s all it ever is. It’s never exceptional, never magical in the way I’ve come to expect from a game fronted by Nintendo’s spearhead figure. Put plainly, it’s the least memorable Mario game I’ve played in my 30-odd years on this Earth.

Still, Nintendo’s first-party polish is very much evident throughout, and if you don’t mind re-treading old ground, then NSMB2 should sate your platforming needs just enough. If, however, you’re looking for the same sense of wonder that games such as Mario 64 or Super Mario World managed to provoke when you first booted them up, then you’re going to come away disappointed.