Audio in games is something for me that needs to be absolutely perfect. Clarity of the sound and audio effects is something that helps immerse you in the world of whatever game you are playing, and when using your TV or PC speakers you don’t always get to hear every finer detail, even when you have the volume turned up to the highest possible setting. Sometimes, you need no other background audio to disturb you and having a decent gaming headset is always a plus point.

Having first encountered them at the Eurogamer Expo last year, thanks to hardware manufacturer SteelSeries, we have been given the chance to try out the 5H V2 headset to find out if it’s worth handing over your cash.

The test!
Although these headsets are designed for use with a PC they can also be plugged into a TV and used as normal headphones and the microphone can be pushed inside the headset when not in use. The first game I tried the headset on was Bioshock 2 on PC and hearing the sounds of Rature has never been so sweet, with a nice clarity which allowed me to hear every little noise and every footstep. While not really a surround sound headset, the level of what you can hear around you in-game makes it almost comparable. What amazed me was how much sound I was missing from the game and how much extra atmosphere there was to take in.

I also used the headset through my TV while playing Mass Effect 2 on the Xbox360 and almost literally feel the shots whizzing past my head. For people wanting to buy something like this for use as a fully compatible gaming headset SteelSeries also produce a dongle that allows you to plug the headset into your gamepad so you can use it like you would any regular Xbox headset. The microphone is also very clear, and picks up your voice quite well, and has a switch allowing you to amplify your tones, this makes the aditional functionality an added bonus for purchasing it.

I didn’t just test it with just games either, let’s face it; you will want to get the best usage out of them. With that in mind I also tested it with normal TV and a few movies and just as with the gaming, the level of detail that was produced with the audio was unreal.

At this point it’s worth mentioning that I didn’t find the cans to be totally noise cancelling, so if you’re looking for a headset to podcast with, these might not be the best choice for you. In every other capacity however, the 5H V2 is a perfect companion to online and single player gamers alike. 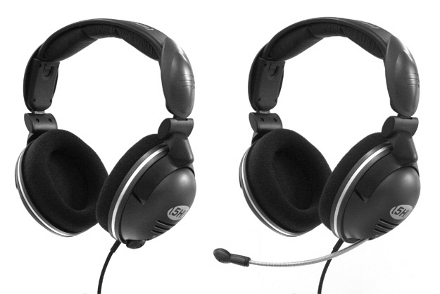 The design
Available in both white and black, the overall design is very simple, stylish and sleek. The white pair I was using looked very Apple-like in their appearance. The cans cover your entire ear so playing for long periods of time doesn’t hurt your lugs and it doesn’t sit so tightly on your head that your brain loses circulation. As stylish as they are, these are not designed for gaming on the move so if you want some for use with your PSP I would look somewhere else as you may look a bit of an idiot on the bus.

The conclusion
If you are an avid gamer and you want to have clarity while you are playing your games then I would recommend this headset to anyone. Designed mainly for PC use, if you are wanting to use it on your Xbox for all the features it’s well worth shelling out the money and getting the additional dongle so you can use the microphone component for online play. Even if you’re not getting them for online use, the sound quality was enough to tell me that they would still be a great purchase and I personally think they are worth more than the price you might pay for similar mid-level headsets. A versatile set of cans for an affordable price.