Professor Layton and the Miracle Mask

Professor Layton is one of those series that I’ve always kept one eye on, even during periods where I didn’t own a DS or 3DS, but simply never gotten around to trying. It’s always appealed thanks to its distinct direction and art style, but it always seemed to be one of those series destined to pass me by, until Professor Layton and the Miracle Mask turned up in the mail, that is.

This fifth game in the series marks Professor Layton’s first appearance on 3DS, but is it worth your time?

Our mentally-gifted lead, Professor Hershel Layton, has been called out to the entertainment hotspot of Monte d’Or; a Vegas-style, desert surrounded party town for those who love life in the fast lane. His presence has been requested by an old school friend, Angela, after the flamboyant city has come under attack from a mysterious Masked Gentlemen capable of horrific tricks, such as turning innocent civilians into stone.

Tagging along with Layton are his plucky assistants, Emmy and Luke, who must help him discover the secret behind the Masked Man’s power. Layton’s past might also hold vital clues to the investigation’s outcome…

I won’t say any more than that, as it would spoil an utterly enchanting plot that unravels at a delightful pace. The story is backed by a strong cast of well-defined and multi-layered characters, where not one feels like an afterthought. Each colourful cast member you come across is likeable and charming regardless of their intentions, with witty and wily dialogue, spoken or otherwise.

As someone who’s never had the pleasure of exploring Layton’s world before, it completely took me by surprise at just how important the story actually is to the game. It’s almost like an interactive Studio Ghibli anime. 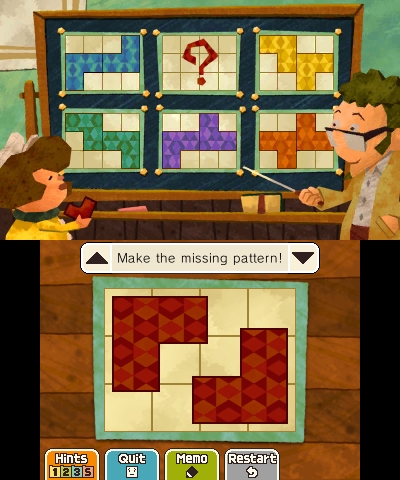 Point, click and puzzle!
So the set-up of Miracle Mask falls somewhere between a simple puzzler and a point & click adventure game. Typically, you navigate the world via a basic map on the lower screen by tapping on the appropriate dot. It’s mostly a linear navigation and all well sign-posted, so don’t expect to get lost or be left scratching your head as to what you need to do next.

Once you’re in a location, you’re presented with a scene on the top screen that you can investigate by using the magnifying glass. You simply drag the magnifying glass around the bottom screen, and the cursor moves around the top, akin to using a mouse on your PC. Once you pass over something of interest, such as a character that might have a puzzle for you, you can tap them once and the game will usually jump into a short dialogue before putting you into a puzzle.

Of course, not everything of interest will be a puzzle. You’ll also find character observations, hint coins to spend when you’re stuck, and loot that Layton will add to his item collection.

The puzzles, then. Well, they’re all exceptionally well put together, and there’s an excellent variety, testing your maths, logic, and observation skills. I don’t really want to go into specifics as it would spoil the game, but for the most part you’ll be using the stylus to solve these conundrums by drawing, writing, tapping and dragging to enter your answers where appropriate.

There’s a lovely difficulty curve in effect here too, so although you’ll find some real head scratchers throughout, you’ll never feel out of your depth. In fact, most times it’ll make you feel like a genius, even if the answer isn’t as hard as you first thought. If you get stuck, the hint coins can be a real help, so make sure you’re on the lookout for them when investigating the environments.

There are a couple of mini-games once you’ve discovered and completed their related puzzles, and these can be accessed at any time by tapping on Layton’s briefcase. The first is a robot guiding game, where you must help him move around the map, three squares at a time, while avoiding enemies and obstacles. The other is a rabbit training game, as you try to get this performing bunny’s acting chops up to scratch for the big show. Lastly is a selling game, where you must stock shelves according to the owner’s specifications, with selling all stock your objective.

Anime-zing…
Professor Layton and the Miracle Mask is a unique and beautiful-looking game, with its anime style its absolute strongest asset. The character design is very much themed around 40’s England, especially highlighted with Luke looking like a little cockney street urchin. The Japanese art style certainly makes for an interesting clash with very English design elements, while the puzzles are also all excellently themed throughout.

There are two elements to the visuals here, though. The cut-scenes are amazingly well animated, and like I said before, it’s like they’re right out of a Studio Ghibli movie. In-game, when chatting to civilians and looking for puzzles, it switches to 3D models that retain their anime look thanks to cell-shading, but the drop in visual flow is noticeable. It still looks great, but you can certainly tell the difference.

I wasn’t expecting too much, but the 3D is actually very well implemented, and it’s highly effective, especially when searching the environments for points of interest. They just pan beautifully, and there’s a great feel of depth as a result.

It’ll make you ‘appy.
My absolute favourite thing about this game? The soundtrack, which is both mysterious and deeply atmospheric. For a puzzle game, all you can ask is that the game invokes intrigue, and it does that in spades. In the puzzles especially, there’s a certain haunting quality that when combined with the visual style feels creepy but compelling at the same time.

There is a lot of dialogue too, and it’s all performed with a wit and charisma that only endears you to every character that you meet. Once again, there’s a lovely clash of influences, from the various English regional accents meeting a very Japanese visual style. 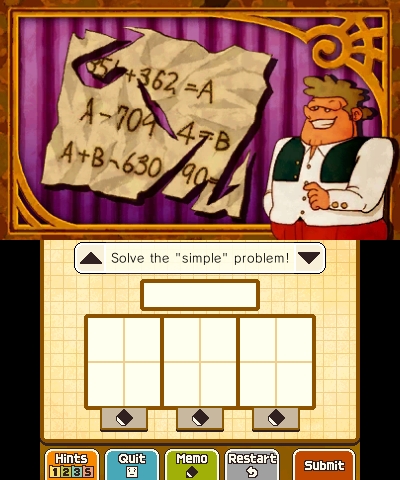 I suck at maths!

It’s a miracle!
Never before did I believe that I’d fall this in love with a puzzle game, but Professor Layton and the Miracle Mask is truly a special game, worthy of everyone’s attention. Although it both entertains and challenges mentally, it also manages to tap into a part of my childhood, reminding me heavily of the Usborne Puzzle Adventure books from yesteryear in both tone and style.

Its biggest success isn’t just in being an awesome little puzzler, though, but in the story it tells and the characters that drive it. Its plot alone manages to enthrall and entertain for the entirety of its lifespan, and simply writing about here makes me wish I’d brought my 3DS to work… damn my forgetful brain...

A high quality puzzler then, and as a series, one I wish I’d taken a chance on far, far sooner.