I am (just about) old enough to remember the original release of Boulder Dash back in the Mid Eighties. In fact, it is one of the first computer games I ever played on my nice ZX Spectrum as an impressionable five-year old. 25 years on, as part of Microsoft’s now infamous “Summer of Arcade”, the game has been lovingly re-created and given an XL makeover by Catnip Games.

The usual questions regarding “classic” remakes inevitably follow, so I have taken to the time machine and entered 1984 gaming to see if the new version can equal the original and acquire the “classic” tag all over again.

What a load of Boulder Dash
For those of you not old enough to remember the original, the easiest way for me to describe Boulder dash is a cross between Pac-Man and Bomberman. You take control of one of two Robot’s, Rockford (the male) or Crystal (the female) and control its movement around a series of caves collecting Diamonds. Once you have picked up enough, the cave exit opens and you have to get out before time runs out.

There has never been any kind of story to explain why you are doing this but in true puzzler fashion, Boulder Dash has a habit of making you play just a bit longer anyway. The challenge comes from the fact that you have to run under and around boulders to get at the Diamonds and by removing the supporting dirt/Diamond, boulders will fall, crushing our hero if he doesn’t get out the way, sharpish.

Rock falls
In the new XL version we have five game modes to choose from. The standard mode is Arcade and sees you take to 100 caves across four worlds, collecting numerous Diamonds. As with the original, each cave has a strict time limit to be completed in (usually under two minutes) and you only have to get a certain amount of Diamonds to open the door, rather than all of them.

Initially there are only five caves available to play and an additional ten open up at a time as you go, until you have opened all the caves. Points are gained for collecting Diamonds or by killing enemies. A bonus is awarded for collecting every Diamond and for getting to the exit with time to spare.

The four worlds are Ice, Inca, Tech and Reactor. The boulders change style between them, as does the dirt you need to make your way through but the different worlds don’t alter the gameplay in any way, shape or form. Controls could not be simpler either, with LS to move your character and you just need to move through a square to clear the dirt or pick up the Diamond. You can hold down RB at any time, which freezes the level timer, allowing you to move the camera around and see how the cave lies at any time. You will also gain the ability to use a telescopic arm with a particular pick up, which allows you to move rocks or pick up Diamonds from further away; this is controlled with the RS. Finally, the A button will allow you to dig, grab or push the square next to you which, again, comes in handy on some of the more complex levels.

Along the way you will pick up various power ups that allow you to move quicker, gain time, open padlocked doors and regain health. You will also find trapdoors that can only be entered from one side and teleporters, which are colour coded, in the caves as you progress. Finally, some of the levels will have enemies to avoid (kill) for bonus points. These vary from your bog standard fly type creature that goes back and forth on a single line, to the more complex and tricky Bold Berserkers that basically charge you on sight.

Having completed a cave you open it up in Zen mode. This is essentially the same game without the time limits which allows you to casually replay the levels collecting all the Diamonds with no pressure to rush to the exit. 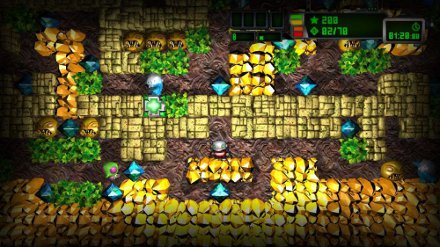 There is a Score Attack mode which gives you a single level from each of the four worlds and a huge amount of Diamonds to collect. You only need one to open the exit but the target here is to get the highest score possible by getting the maximum number of Diamonds in the tightest time limit. It’s not a bad mode but as the main game is only really about score and there are only four levels here, it is only a very minor distraction.

Puzzle mode is exactly that; caves are seriously reduced in size and consist of far fewer Diamonds, but you need to get all of them to open the exit. In each of the 25 puzzle caves there is a specific path you need to follow and these can be quite taxing. Unlike the Arcade mode there is no time limit and getting a high score is not the ultimate aim, beating the puzzle is.

Finally, we have the lovingly created Retro mode. For newcomers this will be the bit you avoid like the plague as the graphics are about as poor as you will see anywhere, the sound is incredibly tinny and the game is a bit tougher, as the Diamonds will also kill you if they fall on you. For those of us old enough to remember it first time round, Retro mode is a trip down memory lane, which will make you realise in about twenty seconds flat just how far gaming has come. Visually impaired
Graphically there really isn’t much to say about Boulder Dash XL. Yes the caves and both Rockford and Crystal have been suitably modernised for the current generation but this is still a very basic looking game. Caves vary in size and the different worlds offer a slight variation in colour and style but all of them are essentially the same. The Robots are animated well enough and the enemies are of the cutesy type that follow their set patterns, but still look fairly menacing.

Retro mode has been lovingly re-created and looks every bit as ropey as it did on the basic home computers of the eighties. It will certainly put a nostalgic grin on the face of any older gamer but let’s be honest here people, you probably wont stick out the 25 levels.

Sound of the underground
There is a single, relatively annoying tune played throughout the game with the exception of Retro mode which reverts back to its roots. Sound effects, like visual ones are fairly basic, as is the nature of the game. Your robot will make the appropriate R2-D2-esque noises at times and you get an audible chime when picking up a Diamond. Boulders and dynamite explode with a solid enough boom and enemies splat when squashed. There is also a fanfare at the start of each level along with a very robotic voiced countdown. It fits the game but as with everything else is extremely basic.

Solid as a rock?
At 800MP, Boulder Dash XL is in the “average” price bracket for arcade titles and although there are 100 caves to play on Arcade and Zen, 25 on Puzzle and Retro and 4 more on Score Attack, I’m just not sure it offers enough. For us older gamers this is definitely an enjoyable trip down memory lane and the game is every bit as addictive as it was all those years ago. It almost keeps daring you to try one more cave, or to try and get that last Diamond you missed. For the younger gamer, if you like a bit of puzzle fun in your life and can see past the basic graphics, you could do a lot worse than give this a look.