“We’re going deep and we’re going hard”. Since its creation in 2003, the Call of Duty franchise has been known for devotion to the World War II setting. The original was widely praised for its gritty, realistic and harsh portrayal of historic battles. The game allowed me to experience war up close and far away simultaneously. I especially gained satisfaction in learning a bit about the past whilst enjoying a video game. Due to the success of Call of Duty, two sequels have since been released. Now, after allowing others a chance at expanding the franchise, acclaimed developer, Infinity Ward, has returned to the helm and (finally) decided to update its calendar with Call of Duty 4: Modern Warfare. Very few titles deserve such lavish praise, but this game is a winner with a mountain-sized ‘W’.

What the hell kind of name is “Soap,” eh?
What do you get in a situation involving jihad extremists, coup d’états, peeved Russians, and nuclear weapons? A big fat ‘hell no’ from the West, that’s what. Although most of the focus is on gameplay, Infinity Ward cleverly sets up the story in Modern Warfare. It’s a classic ‘East versus West’ narrative in which Russian Ultranationalists (patriotic sociopaths) want to nuke the West or, more specifically, the United States. You play as two characters in the campaign: Sergeant ‘Soap’ MacTavish of the British SAS, and Sergeant Paul Jackson of the United States Marine Corps.

You’ll keep switching between the two for different missions as the game progresses. Like most first-person shooters, you never see your characters’ faces, so a lot of your focus is directed towards your squad-mates. Amongst these is SAS Captain Price, a down and dirty, no nonsense veteran; ‘Gaz,’ a top SAS soldier whose rank is never revealed; and Staff Sergeant Griggs, a tough US Marine. Over the course of the game you’ll find yourself teaming up with these three and many more soldiers.

As Soap, you’ll travel to destinations including Russia and the Pacific in earlier excursions. The Russian missions take place in secluded mountain areas, and (to add anxiety to my fear of heights) they’re deep within enemy territory. Paul Jackson’s missions all take place in a fictional Middle Eastern country. There are no real jaw-dropping plot twists in Modern Warfare, but it must be mentioned that there are some fairly traumatising in-game cut scenes.  One heart-wrenching example of this is when you witness an execution in first person. Salutations to Infinity Ward for using the game’s opening credits as the lead up to this. It doesn’t only involve the player with the game early on but teases more quality cinematography, and it didn’t disappoint.

Nothing like a little Warfare in the morning
Like a lot of titles within the first person shooter genre, Modern Warfare’s campaign gameplay is relatively linear. However there is an exception in the harder difficulties. Infinity Ward has managed to create a surprisingly intelligent and cunning AI. Just as in previous Call of Duty campaigns, you can select one of four difficulties: ‘Recruit’ being the easiest and ‘Veteran’ being somewhat impossible. Enemies show great efficiency with a clever tactic where they hurl grenades at you while you take cover. A HUD on your screen will signify what direction the grenade is in and if you’re able to throw it back or not.

If grenades are unsuccessful, then Kalashnikovs will be locked and loaded when you come out. Once your character comes under heavy fire your screen will begin to turn red, and he’ll start to hyperventilate. In these situations the best way to avoid being killed is to get clear of enemy fire for a small period after which he’ll start to recover. The modern day setting means that all your weapons are the latest on offer. At your disposal are a wide range of weapons like the M16A4 assault rifle, and cool new perks including Claymores. That being said, perks such as night vision goggles become more of a luxury than a necessity after only being needed once. There is no upgrade system for weapons while the game progresses, as you will get what artillery is best suited for missions, but you’ll be able to pick up unused weapons.

You may only carry two firearms, two types of grenades (four of each), and you’ll get different types of perks each mission. Worth mentioning is the unforgivable spawning mechanic in Modern Warfare. One thing is required in order to prevent enemies overrunning you, and that is to overrun them first. But don’t fret, after all this is no lone wolf shooter since you’re always aided by your valuable AI squad-mates. Speaking of wolves (see what I did there?), the enemies have dogs, and this pack of four-legged beasts are no man’s best friend. They don’t fear you, your gun or anything else; they have only one objective: to rip out your throat. The secret is to kill them before they get close; if you don’t, they’ll jump on you attempting to carry out that throat-ripping previously mentioned. At this point there is a little mini-game where you must try to kill the dog before it kills you. 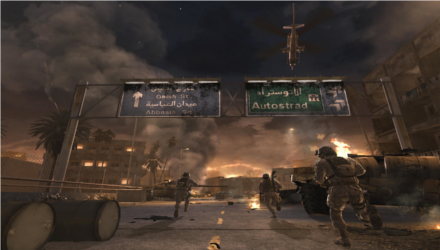 There are three standpoints available during the game, standing, crouching or lying face down. All three have advantages and disadvantages. Some of these include better shot accuracy and slower movement. Progress made in each level is rewarded through checkpoints and, once you die, you’ll be brought back to your last checkpoint. During later missions, you’ll begin to notice integration between the spawning mechanic and the checkpoint system. You’ll reach a stage in the game where you must push for checkpoints, or enemies won’t stop charging. Once you push far enough an invisible tripwire will be triggered and enemies will stop spawning. Missions like ‘One Shot, One Kill’ and ‘No Fighting in the War Room’ are perfect testament to this.

In every game there is at least one problem, and Modern Warfare is no different. Friendly fire is a tragic and unfortunate way for any soldier to die; it was very thoughtful of the developers to include it in the game. That being said, the least they could’ve done was insert an option to switch it on or off. During battles I found myself unable to determine if someone was on my side or not and, as a result of shooting a comrade, I got a ‘friendly fire is not tolerated’ message and booted to the last checkpoint.

My only reasoning for making it an unchangeable feature was to create a more immersive experience. No matter what you make of it, one in-game quote couldn’t have expressed it any better declaring that “Friendly fire…is not.” Once you complete the campaign, you’ll unlock Arcade Mode, where you can do missions with a certain arcade style. You’ll start each level with a given amount of lives, and can compare your mission time with friends depending on platform.

Do I look fat in this Ghillie suit?
Modern Warfare is one of the most visually stunning games out there running on Infinity Ward’s proprietary engine, and runs at a highly dependable 60 frames per second. Some landmarks shown in-game were virtual carbon copies of their original. You must take into account that most of the surroundings are destructible. Surfaces such as thin metal and wood will be penetrated if fired at, so you must be cautious with where you take cover.

Also destructible are vehicles which seem to be fine covering spots until they begin to brew flames from heavy enemy fire. Whether it’s crawling through Chernobyl in a Ghillie suit, or witnessing a tank being pulverised by another, the graphics are top drawer. From a visual perspective, my most memorable scene in the campaign was when I witnessed a nuclear explosion. The mood was chilling, the sky was dark orange, ash was scattered everywhere, and visible in the background was the haunting image of a mushroom cloud.

Beethoven would be proud
The sound in Modern Warfare is exceptional, from the recoiling racket of cannons aboard the godlike AC-130 gunship to the ominous ‘clink, clink’ of a frag grenade ready to go off. The weapons also pack a real punch in the sound department. The audible twirling of an RPG as it thrusts to or fro is incredibly vivid, not to mention the satisfying end result. The voice acting is nearly flawless, the dialogue relates to all the situations while the score is deep and engaging.

One memorable conversation was in the campaign level ‘Death from Above’ in which you operate guns inside the AC-130 gunship. Around halfway through the mission the gunship’s pilot is unaware of a certain place and must ask the control centre for its location. The conversation is structured with precision, well balanced and timed very appropriately. Dialogue between enemies is a little repetitive, although they either speak in Russian or Arabic, you will begin to hear more of the same banter as you progress. Nonetheless, even after I finished the game some of the sounds stayed imprinted in my memory. 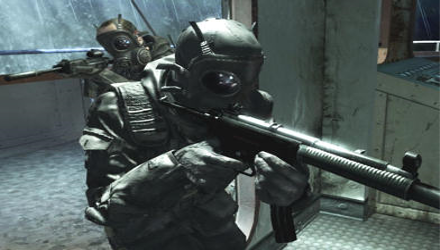 S.A.S does not stand for Super Army Soldiers!

“Let’s do this Marines”
It’s no secret that for a game to have any lasting appeal nowadays it must possess competent multiplayer. Unsurprisingly, Modern Warfare also delivers in this area. There are different types of matches to choose from such as Team Deathmatch, where up to twelve players (two teams of six) can pit their skills against one another. Gameplay is slightly affected by dependance on online servers, but it rarely poses a problem. A beginner can only choose one of five alloted classes which are groups of uncustomisable weapons and perks.

After your first promotion, you are given the option to create your own class, which is where the real fun begins. When customising your class you can pick one primary weapon, one side arm, different grenades, and 3 perks. Weapon attachments include a red dotted sight and grenade launcher, while perks include martyrdom (blow yourself up in one final stand) and iron lungs (longer breathing time when sniping). The more you play and gain promotions the more weapons, perks and add-ons you will unlock.

During matches you are given certain objectives or side quests, and if completed you will be rewarded with more unlockables. The multiplayer has a ranking system which reflects that of actual military structure. You start out as a Private, and must make your way up to General. Of course it is not mandatory to do so, but the higher your rank is the better your weapons and perks will be, which does matter. At some points during play you’ll find yourself in a situation where you have the edge only to get filled with lead. This is usually because your enemy has a superior weapon along with perks. The campaign mode is satisfying enough, but Modern Warfare’s multiplayer adds another dimension which is why it’s in for the long run.

Semper fi
Infinity Ward will make a lot of young men single again with this masterful modern day shooter. Medal of Honour was the dominant first person shooter in the last console generation with fantastic games such as Rising Sun, but now Modern Warfare has surely taken that title for the current cycle. Instead of adding too many changes to what we’ve come to love about the Call of Duty series, Infinity Ward has simply updated it and to staggering effect no less. Call of Duty 4: Modern Warfare was made for shooter fans, but its powerful depiction of how cruel and unforgiving war is should be recognised by everyone.