Alternate realities are great. In recent years we’ve had; a World War 1 that never ended, the Cold War that got hot and the Russians invading America and, my favourite; the Nazis conquering England and the US in huge, metal zeppelins. These changeable histories allow developers a degree more creativity and scope than those setting out to make a straight-up recreation. Usually, we the gamers are better off for it, sliding through a plethora of ‘what if’ scenarios like penguins on ice and enjoying the ride. Unfortunately, sometimes the concept just doesn’t work. Case in point; Damnation. Developed by fledgling studio Blue Omega, this odd shooter/platformer is set in the American Civil War; except a nefarious, totalitarian dictator is sweeping across the country and taking over. Oh, and there’s machine guns, motorbikes and modern trains. Confused? You ain’t heard the half of it…

What the hell is going on?
Damnation tells the tale of a band of resistance fighters, headed by the ridiculously named Hamilton Rourke (that’s you) and comprised of the most annoying people ever to grace the Xbox 360. They waffle nonsensical crap until your ears bleed, and serve as nothing better than cannon fodder in combat. Anyway, the aforementioned dictator (some bozo named Prescott) is drugging all the innocent civilians and turning them into crazed monsters. How that’s supposed to help him take over the country I’ll never know.

In fact, most of the games story managed to evade me, as if the writers deliberately wanted to keep me in the dark, more likely, however, is that the story just plain sucks. The resistance is just that, a random resistance. The arch enemy is mostly just a voice coming out of a million speakers dotted around every level and is physically represented by badly textured waves of enemies. There is no sense of a grand adversary who you must destroy out of principle, to protect the freedom of your nation. Just waves of thick bad guys with pin-sharp aim and a disembodied voice. The addition of bizarre and unexplained leaps in technology and vehicles and the inclusion of some form of Native American magic just serve to highlight how little thought went into the plot and the world created. Well done Blue Omega… 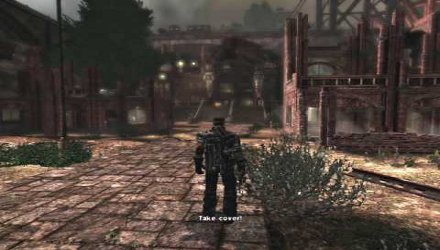 Damned if you do…
Gameplay wise, Damnation is a mixture of platform jumping and over-the-shoulder shooting. The former is a playable combination of straight jumps, wall-grabs and pipe-swings. While it never reaches the dizzying highs of Prince of Persia, it works well enough and is easily the best aspect of the game. The latter, however, is terrible. Having to pull LT to draw and aim your weapon is a nightmare; it takes an age to do and feels unnecessary. Zooming is placed on R3, a nice representation of how ancient this game feels. Not to mention the inaccuracy of most of the weapons forced me to use the pistol for most of the duration of the game.

The shotgun is useless unless the enemy is within poking distance, the machine gun couldn’t hit a bus from ten yards away and the explosive rail spike gun takes a full thirty seconds to charge up rendering it entirely void of use. The sniper rifle would be a saving grace, but instead becomes an albatross. It takes three clicks of R3 to zoom in enough to effectively make a shot and the magnification resets every time you release LT. Which means to crack off a shot, you have to hold LT, line it up, click R3 three times and then fire. If you miss the head and need to deal another body hit, but need to reload, the game forces you to zoom in again. This sort of evil and needless programming was commonplace in games of old, and contributes to the growing feeling that Damnation is in fact a time travelling game. Secretly released some years ago for the old Xbox, but somehow made its way into our time and into a 360 box.

The absence of maps, markers and objective pointers compound to make every step and jump a confusing chore. The only way to have any vague idea where to go is to use Spirit Vision to find your buddy and then try to reach them. The problem is, most of the time they don’t show up on the Spirit Vision, or they’re miles away with shed loads of contradicting structures and dead ends between you and them. It seems every piece of code, every aspect, every feature is designed solely to piss everyone off and drag the game into its own special little circle of hell. If shockingly broken and outdated gameplay wasn’t enough to secure Damnation immediate entry to the bargain bin, Blue Omega have gone and made it look and sound old too.

Damn blocky
Never before have I seen the Xbox 360 display such turgid graphics. Blocky edges and rough, broken textures plague Damnations every corner. Glitches and clipping issues are common, explosions look straight out of a cheap 80’s movie and the aforementioned waves of enemies look awful. Bland textures cover every surface, making navigation almost impossible. The only things rendered in anything near current-gen quality are the character models and the weapons. Although the characters are so samey and unoriginal and the weapons so overcomplicated and pointless you’ll wonder why they bothered. Even the epic scale given to many of the levels (and the impressive draw distance along with it) do nothing to disguise the serious lack of quality visuals Damnation has to offer. I assumed developers had left these travesties of the eye behind long ago, in the last generation. It seems Blue Omega have not only decided to bring them back, but somehow figured it would be acceptable. Well it’s not, and I for one felt like I was looking at a distinctly last-gen title. 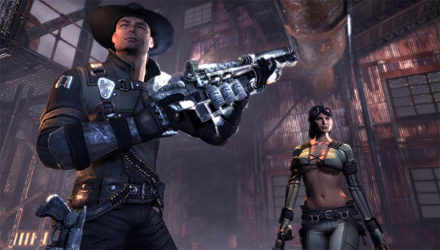 Unholy racket
With a name like Damnation I expected some death metal on the soundtrack. Sadly not. Instead I was presented with a poor man’s Call of Duty 4 soundtrack, all Hans Zimmer staccato strings and horns. While it fitted the game in places, the severe lack of decent composure or variety of different themes grated quickly, again bringing a feeling of old-game laziness. As for the sound effects, not much can be said. Boots crunch and guns go bang. Most of it is basic or underwhelming and usually a mixture of both. It’s obvious to me no special attention has been given to the sound and much of it is mixed badly. When the sound of a robot moving is louder than the explosion of the rockets it fires, something is very wrong. Failed again, Blue Omega.

The Lonely Damned…
I was looking forward to telling you all how awful the multiplayer was going to be, but unfortunately I can’t. Not because it’s good, I’m still sure it’s not. Despite trying for a good hour I could not find a single match. Not one. It seems that, despite the seemingly wide and interesting range of modes on offer, gamers decided to drop the awkward aiming and lack of cover mechanic and play something else. With multiplayer classics like Gears of War and Call of Duty 4 available at a similar if not lesser price, why settle for second best? Maybe even third best…

Damn this to hell!
So there you have it. Due to a lack of decent plot, solid gameplay and attention to pretty much everything, Damnation’s potential was turned into one of the worst, most broken and unplayable games on the 360. The concept is good, the ideas sound it (if a little eccentric) but the execution is just not there. I cannot think of one good reason why you should play this tawdry peice of shit. Don’t even rent it. The box looks interesting, the blurb promises much, but in reality the only thing Damnation delivers is an infuriating, exasperating and altogether pointless experience. Going to the toilet is more fun than this game. I imagine jumping up and down on the box until it cracks, destroying the wastrel disc inside, is more fun than actually playing it. Stay well away folks…