Vigil Games’ ‘Darksiders’ isn’t a game that I’d been following all that closely until very recently, writing it off as another of those hack ‘n’ slash games that tend to bore me so. However, after many of the previews on the interwebs claimed that early builds of the game bore more than a passing resemblance to the renowned creation of Shigeru Miyamoto and Takashi Tezuka; The Legend of Zelda; that all changed.

Being a huge Zelda fan, and with this new knowledge in mind, Darksiders instantly became a title I just had to check out. In many cases this level of ‘industrial bootlegging’ can work against a title (although it has worked for some), but by borrowing elements from other titles and thanks to the brilliant execution, Vigil might just have a bit of a surprise hit on their hands.

War! Huh! What is he good for?! Murderising demons actually…
In Darksiders, players take on the role of War, one of the fabled Four Horsemen of the Apocalypse. The four horsemen, no matter which of the many interpretations of the myth you are familiar with, are summoned to Earth by the breaking of seven seals to pass divine judgement on the planet’s inhabitants. In this case, War is summoned to Earth amidst an escalating battle between Heaven and Hell in the streets of New York; yet one of the seals hasn’t actually been compromised, meaning that the end of the world has gotten off to something of a false start.

With only one Horseman present, Heaven loses the battle, and War is returned to the Charred Council where he is stripped of his power and charged with bringing a premature start to judgement day. A deal is struck as War manages to convince the Council to allow him to return to Earth to seek those who framed him, on the basis that, should he fail, he’ll die and the Council’s punishment will therefore have been received. It’s here where the game starts for real as you must traverse different areas of Earth one hundred years after the end of the celestial war to build up your power so that you can put things right.

I found the story for Darksiders extremely intriguing despite a heavy focus on religious themes (I don’t do religion). The game isn’t preachy, so don’t worry fellow atheists; the focus is on the darker themes of faith, mixed with a modern take on the end of the world, and it excels at creating a set-up for an enjoyable adventure with a purpose. Whilst the game provides a sound setting rife with twists and turns along the way, the plot probably wouldn’t be deep or strong enough to carry the game, but such is the quality of the other areas of the game’s design that the plot becomes a solid link in a well built piece of armour that comes to a fantastic ending that’ll only leave you wanting more.

The plot however, would be a lot stronger if the characters didn’t play their own part in its few moments of weakness. The key players seem to range from being excellently presented to painfully bland, and it’s a shame our protagonist is firmly in that latter bracket. While War has brutality in spades, he demonstrates as much charisma as a room full of accountants. I get the impression that the developers were aiming for a detached, cold-hearted killer, but they missed the mark by a considerable margin. Other characters, such as the bosses, and War’s guide to the apocalypse ‘The Watcher’, are far more engaging personalities. 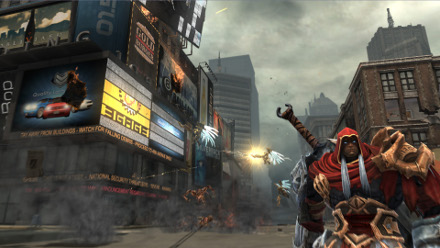 The dullest man, in the most exciting scenario!

The road to ‘Ruin’…
I’m going to try my absolute damnedest here to get through this particular section without mentioning the little fella in the green hat, but I suspect that it will be a difficult ask. Stripped of all powers, War must work his way through to a number of differently themed locations. In each he’ll earn a power or new weapon there, that will help him overcome all obstacles presented to him and reach the end boss for that section. Each of these locations is home to a number of wicked puzzles and mini-bosses that your newly equipped ability will help you beat. The bosses are very much puzzles in their own right, and often require a bit of pattern spotting or lateral thinking to defe… STOP! Stop; stop the damn review right this minute. I can’t keep up this pretence any longer… Is there any part of this at this point that doesn’t sound like a Zelda game?

Everything about the set-up mimics most Zelda titles, however it doesn’t end there. You could easily see plenty of Zelda symbolism in Darksiders iconography. Collect four pieces of skull, and you get a new health bar. Some of the power ups you earn are a Crossblade, a Tremor Gauntlet and the Abyssal Chain. Replace some of those words with ‘Heart’, ‘Boomerang’, ‘Power Glove’ and ‘Hookshot’, and you’re in the right sort of frame of mind to embrace the Darksiders experience. The puzzles are very thoughtfully put together, with some of the later ones leaving you feeling like a genius upon completion, and it’s here where the game is at its absolute strongest.

The combat side of the game is also built on solid foundations, though it can feel a little on the basic side. This element is purely hack ‘n’ slash, with practically one button combat. Your sword (dubbed the ‘Chaoseater’) will be your main tool for bringing harm to the hordes of demons and celestial beings, and you unleash this by hitting the X/Square button. Eventually you’ll earn a secondary weapon, and to use this you hit Y/Triangle, and from that moment on you realise that the combat will continue to evolve slightly alongside the additional abilities you’ll unlock over the course of the game. Some of the different types of standard enemy sword fodder will require different approaches, so this basic system does allow for depth in other ways.

There is more depth to be found by players looking for it. By killing enemies (or opening the appropriate chests) War earns souls. Yellow souls help build your ‘Wrath’ which allows you to use some abilities you might purchase from Vilgrim (your one stop shop). Blue souls, which are the world’s currency, can buy you those abilities or new attacks, and finally green souls will replenish your health.

Once you get most enemies down to a certain level of health, a B/Circle sign will appear over their heads. By performing what it asks, War will unleash a brutal finishing move, sometimes with the game changing the camera angle for added dramatic effect. Another one of War’s more satisfying moves is the ability to turn into a powerful fire demon. When you attack enemies in your standard form, a red gauge will build; when full you can perform the transformation, which lasts for a limited time only but gives you devastating power. The animation in combat is seamless and beautiful to watch, with no transitions between normal hacking and finishing moves like you’d see in other games.

There are also three different flavours of firearms to use along the way. One War will earn, and the other two are found by disposing of particular enemies. The latter two are very powerful, and extremely helpful in some rushed situations, but you can’t take them everywhere with you. Lastly it’s worth mentioning that you will reunite War with his Horse, ‘Ruin’, who helps change up the gameplay a little. You can summon or discard Ruin at will in areas that allow you to use him, and he comes in useful for not only quick travelling, but also in some of the combat and puzzles you’ll face over the course of an enjoyable twenty hours or so. 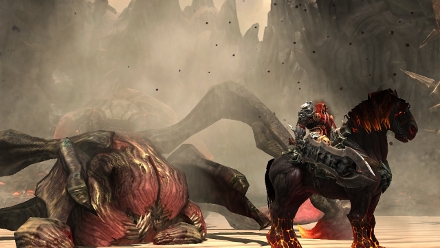 War takes time out from fixing his mistakes to help Kevin Bacon & Co...

Not actually that dark
In spite of the name and what certain promotional images might portray, Darksiders is a colourful and varied title, far removed from the greys and browns of most of today’s games. It is a beautiful game, especially the environments, which showcase a great fusion of mythically gothic structures with modern architecture.

The characters and creatures are also very nicely modelled, with a pleasing amount of attention to detail; although they do harbour a slight cartoon feel to them. War, along with some of the other battle ready characters, is from the Marcus Fenix School of bodily proportions (where muscles are seemingly offset against the amount of personality you are allowed to assert), but it does add to the fantasy world that Vigil have tried to create, and no one ever really looks out of place.

It’s not all perfect; at times there can be some quite severe screen tear. This problem seems to become less of an issue the further you delve, and it’s never bad enough to be a game breaker. It is however, a blight on an otherwise eye-catching experience, which looks impressive from the moment you start. Developers Vigil have announced that a patch is already in the works to fix this issue, so hopefully latecomers to the game won’t have this to moan about.

Not quite ‘Darksiders of the moon’
The soundtrack found in Darksiders is one of dramatic drums, stabs of strings and vocal harmonies. It’s a powerful, if predictable affair that gets you in the mood for slaying, but never really changes throughout the course of the game.

I mentioned somewhere above that some of the characters were missing personality in spades, and this in part is down to the general voice acting. Most of the script is read so dryly and without emotion that making any sort of connection with the characters is nigh-on impossible. There is one notable exception to this however, that of Mark Hamill’s turn as The Watcher (War’s less annoying version of Navi), who totally steals the show. The problem being that his performance stands out massively when compared the mediocrity of the others; it’s like placing a single, succulent cherry in the middle of an entirely plain sponge cake… Now I’m hungry, where was I?

Join the Darksiders
On face value, Darksiders is a game that could be criticised for being completely devoid of originality, made up entirely of smaller components ripped right from some of the industry’s major franchises. Some of those key areas individually might crumble slightly under closer scrutiny, but all these parts pooled together this well make one hell of a gameplay experience; one I believe could well be a bit of a sleeper hit. While much of my own complaints fall on things such as characterisation, it’s hard to deny that in the midst of the gameplay, be it puzzles or combat, that the game is both challenging and rewarding enough to be worth anyone’s time and money.