What makes a horror movie? The gore? The suspense? The monsters? A combination of all three? Whatever it is, it’s safe to say that we love them, and have done for years. As long as it makes us cringe, jump and lose sleep, horror is universally popular in film, but not so much in games. While many have hit the nail on the head, just as many have failed to even startle us. Thankfully Dead Space, the latest survival horror offering from giants EA, is shockingly on the right side of scary.

Dead Space follows Isaac Clarke, a young engineer sent to the deep space mining ship Ishimura to investigate a distress call. In true horror fashion, the rescue team’s ship malfunctions during docking and crashes into the drilling leviathan. With their ship in tatters, the crew venture into the ship to find a way home. Cue encounters with some gruesome monsters, a few grisly deaths and a typical ‘everything goes pear-shaped’ scenario ending with Isaac becoming separated from his cohorts. With his friends cowering in a locked-down area, Isaac must make his way through the labyrinthine interior of the Ishimura and figure out what’s going on unassisted.

First order of the day: restart the ships systems. This plays out like regular fare, causing you to run around flicking switches and solving mildly difficult puzzles to bring the essentially dead mining ship to a shuddering rebirth. During his travels Isaac meets with all kinds of grotesque beasts that become steadily more twisted as the game moves on. Don’t let my cynical analysis fool you folks; Dead Space’s plot has more twists than a bobsled track and more ambiguous curios than an episode of Jonathan Creek. The Ishimura is littered with voice recordings from ex crew members, painting the big picture not too differently from Bioshock, albeit with slightly less frivolous chatter. Essentially, surprises are many but big shocks are few, and although the plotline will keep you hooked firmly to the very end, it somehow felt underwhelming when compared to ground-shaking revolutionary stories of old.

“Don’t just shoot them in the head!”Guiding Isaac around the Ishimura’s dank corridors is concise and fluid, and will be oddly familiar to anyone who’s played the latest in the Resident Evil series. Shooting is of the over-the-shoulder variety, and being a skilled space engineer, Isaac is of course, a canny shot. This brings me to the first in a long list of game play elements that elevate Dead Space above the norm.

Isaac is a technician, not a soldier, and the Ishimura is a mining ship. Unsurprisingly, the quartermaster decided rocket launchers and laser guns were not essential additions to the ship’s supply list, and so Isaac must make do with whatever he can find to deal with the gristle-bound enemies. Every weapon at his disposal, minus a handy rifle courtesy of the on-board security service, is a mining tool of some sort. Each fulfills a basic standard weapon type – the Plasma Cutter is the pistol, the Line Gun is the shotgun and so on – but at least they break the age-old firearm traditions.

In fact, nothing in the game seems out-of-place, and EA have obviously made an effort to base Dead Space as firmly in science-fact. Take Isaac’s suit; a standard issue engineer’s garb, complete with air tank and zero-G boots. The addition of stasis and telekinetic powers is a small mystery, but think a little and you can see the usefulness of such abilities to a space technician. The ‘shop’ is the ship’s trading system, used by the previous crew to maintain some form of normality in the freezing depths of space. Everything is apparent, and everything is in its place. It’s this sort of attention to detail that makes a ship like the Ishimura, with its grey construct and Alien-style steam-filled corridors, feel alive. It’s all the more unsettling, then, when we see what’s killed it…

The Necromorph. Not the most original name and not the most original enemy designs either. Respect to EA Redwood though for being suitably screwed up in the head. Not since the early joys of Silent Hill have we seen beasties of this manner. Bulbous, bloated bodies against walls, latched on with tentacles spitting unsettling, sprouting eggs that hurl green poison. Dog-like creatures, bounding out of air vents to rip you apart. Hulking, raging beasts, plates of bone-like armour adorning their bodies, crashing through doorways and chasing you down. Heart-in-mouth moments are ten a penny here, and Dead Space is all the better for it. Each enemy has its own weakness, but dismemberment is the order of the day here.

Redwood was so proud of this feature that it named the demo after it, and the feature doesn’t disappoint. Firing at enemies’ joint will cause their limbs to sever and begin flailing around of their own accord. Legless foes will crawl, armless ones will run over and try to head butt Isaac to death. It may sound comical, but when you have to literally cut an enemy to pieces to defeat it, wildly blasting in their general direction is suicide. Accurate shooting is a must, and I suspect many advocates of the trusty machine gun will be sorely disappointed with its ineffectiveness. Don’t get me wrong, it has its place, as do all the weapons. Each one is designed to beat certain enemies, but with only four weapon slots, deciding which ones to take is a tough decision. One that means the difference between life and death in a game whose enemies pull no punches.

Anyone familiar with the survival horror genre will know that health kits are mana from heaven in the eyes of the player. Dead Space is not short on these boxes of ambrosia, but their effectiveness is limited, and the inventive menu system makes them almost useless in the heat of battle. The only way to stop the action is to pause the game. Everything else, inventory searching, map reading, objective viewing, is done in real-time, thanks to a neat holographic projector on the front of Isaac’s suit. Even the in-game communications and video files are displayed this way, extending the usual level of immersion beyond that of almost any game before and further raising the heart-rate in times of peril.

Dead Space has no multiplayer to speak of, and it’s all the better for it. Unlike Resident Evil 5’s fun but oddly uncharacteristic Mercenaries mode, Dead Space is an exclusively personal experience. Any foray into co-op or multiplayer of any kind would damage the sense of pure loneliness and isolation that you feel while exploring the ship. The game is all about personal fear, personal experience; to crowbar another human in there would shred a perfectly balanced formula. EA Redwood have fully justified their decision, and multiplayer is not missed one bit here. 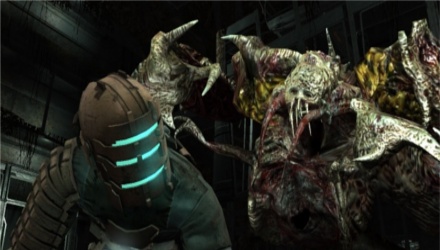 The creeping dark…
Visually, Dead Space is stunning. The Ishimura is an awe-inspiring piece of technology, its maze-like corridors connecting botanical gardens, research labs, engine rooms and observation decks the likes of which have never been seen in a game. Others have tried, but none have matched the character and scale achieved by the Ishimura. The craft almost breathes with life, grinding and shunting as it draws breath, shuddering and spewing steam when something’s wrong. The graphical cues are second to none, and while a lesser engine would require developers to add extra objectives and sound clips to guide the player, the way the ship reacts to things is more than enough. While the colour palette is limited to black, grey and dark grey, the operation panels and electronic displays light the areas with neon colours.

It’s here the true graphical triumph of Dead Space shines. The lighting effects surpass everything that has gone before. Shadows are so accurately cast they make you jump out of your skin. The little lighting the Ishimura has creates pools of safety, the darkness brimming with danger and fear. Not since Silent Hill have I been this scared of the dark. The weapons spark and flash with urgency and vigour, slicing through enemies like a knife through hot butter. That neatly leads me on to the true stars of Dead Space; The Necromorph.

As mentioned before, the Necros aren’t the prettiest looking chaps in terms of design, but boy are they stunning in their own right. Each one moves with purpose, leaping, bounding towards Isaac with ravenous hatred. Their tentacles and limbs operate independently, slashing into the foreground and (perhaps) literally making you jump out of your seat. Their shadows strike fear into the heart, their appearance no less terrifying. Recalling memories of classic horror creature designs, which I like to call ‘gristle-based’, they each have their own trademark movements, all highlighted and rendered in glorious detail by the outstanding graphics engine.

Sound in the machine
What’s a horror without a good soundtrack? Dead Space is no exception, and besides the usual hissing and grinding of a giant space ship, special mention has to go to the Necromorphs’ other worldly caterwauling. Even when none are in sight, they make their presence known, screams and howls echoing around the Ishimura’s steely interior. Sound is used to fantastic effect here, safe areas being indicated by silence and calm. With no specific theme or score to speak of, Dead Space relies solely on the use of sound effects to flesh out the otherwise quiet mining ship. The Ishimura lives, and every second is filled with the calming hum of the ships engines, peppered with operating noises and machinery sounds.

At one point, I found myself jogging around a room following a strange clanging sound, only to discover it was in fact the ship’s pressurised pipes groaning under the weight of a flow problem. It’s details like this that showcase how careful and considerate EA has been with the sound in Dead Space, and it’s plainly obvious they realised early on that sound, and the correct use of it, is the key to scaring the shit out of people.

Not just another survival horror…
There are many more aspects, from the awkward yet fun Zero-G sections, to the bosses and the general plod of the game, but I’d rather you play it for yourself. Dead Space seems to me to be an acquired taste; a little too violent to be true survival horror, a little too slow to be true action, but a taste that everyone should sample. Fans of the genre will love this, a great combination of suspense, action and grandeur. I’d even go so far as to say it could convert FPS purists to a more cerebral style of gaming, mixing plenty of deft trigger-work with not-too-taxing puzzles. The result; a well-balanced slice of horror gaming excellence. Alien, eat your heart out.