I doubt that I’ll need to explain to any of you all the heritage of Polyphony Digital, developers of the much loved racing simulator Gran Turismo. The series has reached seminal status since its first release on the PSone in 1997, and with very good reason. It was no surprise then, that when Sony introduced the world to the PSP in 2004 Gran Turismo 4: Mobile was announced shortly thereafter. That seems like an age ago now, as in typical Polyphony fashion the game has taken some time to hit shelves, but sadly it has arrived a different beast to what everyone expected. Now simply renamed ‘Gran Turismo’, available on UMD and for download from the PSN store, the game is shadow of its former self, and most of the concessions can’t be blamed on the hardware.

Where the hell is the career mode?!
Bear in mind that it’s taken Polyphony over four years to get us to this point; a lengthy development time-frame for most developers, even for one reportedly struggling to condense their title down to fit a single UMD. However, that sort of time frame is the norm for Polyphony, and shows how meticulous they are. While they probably overdo it with their development cycles, you normally can’t argue with the final product. With that in mind, it is amazing to me that something as fundamental to the series as the career mode is just cut from the entire experience. You won’t be winning cars in races, or wheeling and dealing as much to improve your collection in this iteration, as you are simply left to play in single races and challenges (licenses rebadged) to raise your funds.

Gameplay as good as ever, but where is the reward?
Gran Turismo does still shine in mobile form with its realistic handling; it’s the same great driving experience from the racing game you love. It still plays great, handles brilliantly, but the shortfalls other areas make it all feel a bit pointless. Without events, championships and suitable rewards for winning the single races, it becomes somewhat of an empty experience. Playing through and completing the challenge mode also feels meaningless, as aside from credits to purchase more of the 800 cars available, there is very little reward and barely any feeling of progression. You can unlock certain features in here, such as the ability to use your own music but nothing that really changes up the game. The purchasing system I found to be flawed; rather than being able to buy the car you want when you have raised the cash, you can only purchase cars from one of four manufacturers randomly assigned to each ‘day’ (after each race). For example I’ve yet to see Lamborghini available to buy from, and I really want a Lambo in my portable garage. 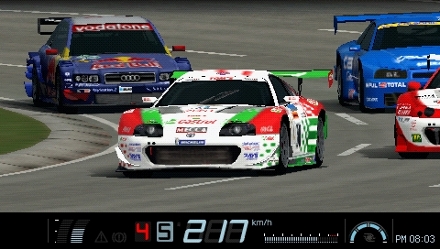 Four of the whopping 800 vehicles

Alongside the impressive sounding 800 cars available, all the racetracks have made it in from GT4. Most of these can be played in forward and reverse, which gives you a healthy number of courses to master. All these tracks are nicely laid out and fun to race around as they have ever been before, if a tad familiar. One major point that takes away from the challenge is that you can only race against four other cars; however you can offset this a little when you consider that the game runs at a super-smooth 60fps. Surprisingly some of the dirt tracks made the cut and keeps the game feeling a little bit fresher at times as you work your way through the different courses.

One inclusion that did surprise me is the ability to tune your cars, helping those in the know to get that little bit extra out of their automobiles. Clueless non-drivers like me won’t be affected as it’s not an integral part of the experience, but a nice feature to make it in, although not at the expense of everything they ripped out of it.

Not quite as good looking as a supercar…
GT on the PSP is a solid looking game but is in no way the best looking racing game on the system. As I mentioned before, it all runs at 60fps which helps it look very smooth without noticeable frame-rate issues. As a result all the cars are really agreeably modelled and look especially beautiful in motion. There are some nice particle effects to be found here too, especially on the dirt based tracks as streams of dust are kicked up by the cars. Each car does have a cockpit view; however all it amounts to is a blacked out frame in place of the interior. While this sounds like a poor substitute, it actually succeeds fairly well at putting you inside the car and is a welcome inclusion for me being a bastion of the cockpit view. Also missing, but expectedly to be fair, are damage models. You can hammer your car into walls as much as you like and it won’t be affected physically. Considering that even now GT5 only might have damage, it’s no real surprise. 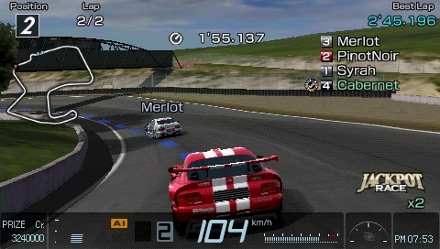 I couldn't find a good screenie of the cockpit view.

Sounds tinny
You’ll find a largely uninspiring soundtrack in Polyphony’s effort here, but thankfully they did avoid the ‘Budweiser ad’ style soundtrack that appeared in Gran Turismo 5 Prologue. The cars themselves all sound a little too tinny as the engines fail to roar how you would hope, resorting to a rather annoying high-pitched drone. This is a shame, but an area I fear that is a frequent issue with games of its type on the PSP.

Got three friends?
There is no infrastructure mode in this game, which is a massive shame because it is something that could drastically raise opinions. Even adding something as simple as leader-boards would have exponentially extended my interest levels. Instead you are restricted to ad-hoc mode, allowing you to race against three mates locally in a fairly smooth experience.

Not quite ‘Top Gear’…
It’s really going to matter little what I say in this review, as Gran Turismo on the PSP will sell by the bucket-load no matter what people advise, so strong is Polyphony’s status. Hardcore GT fans will probably still want it for that classic handling, and in bringing that to the handheld it has succeeded to a degree. It does play and race undeniably well, but there are so many unforgivable omissions that remove a lot of fun from the Gran Turismo experience. There clearly have been broken promises from within that four years development time, as this is as far away from Gran Turismo 4 as conceivable. The cynic in me says this was a crudely rushed title to coincide with and take advantage of the PSP Go’s release, and that we’ll see a fully featured GT for the system later on down the line. Not awful, but not the game it should have been.