Entertainment has worked diligently to try to envisage the feel of far-off Worlds, bringing us closer to a reality we’re never likely to see. The depiction of Mars varies from film to film, and then you get distant, fantastical Worlds such as Tatooine and Pandora. We’ll never know beyond the reach of our Galaxy (at least, not for several hundred years) so we conceptualise, and we produce what we think an alien lifeform would look like: Long pointy fingers which glow, green antennas, tall and blue figures with tails, even men and women with Cornish pasties stuck on their foreheads. Our imagination has become key in allowing us to explore beyond the realm of our possibilities; such is the beauty of humankind.

Upon playing Insanely Twisted Shadow Planet, I was once again reminded of how powerful another person’s imagination can be. How much you can be drawn into fiction, sucked into it like a vacuum, and absolutely believe that the world set before you is as good of a depiction of other-worldly presences as could be. All of this, without a single line of dialogue uttered.

Of course, as with all games, the deciding factor in the purchase narrows down to, ‘Is this a game that I want to spend my time with?’ and ‘Is it any good?’ Let’s explore that…

One of the most unusual things about ITSP is that there isn’t much of a story to go along with it. The campaign starts off with a short cut-scene, depicting your homeworld being overrun by an unusual alien substance. Once that’s done, you’re thrust into a flying saucer and thrown straight into the game, with only an arrow pointing you towards your destination on the map.

One thing you’ll notice about ITSP is that you don’t really need a story; there’s so much to derive from the environment, and learn from as you’re going along, that trying to put a story on top of it would seem tacky. The whole campaign is muted, which is absolutely fascinating when you consider that ITSP has launched alongside Bastion, a game where every single screen has some form of narration. This shows you the amazing level of diversity this year’s Summer of Arcade offers, and also highlights the power of a video-game, and the innumerable number of ways it can tell you a good story. The game’s artistic direction tells you all that you need to know, weaving a narrative of its own. 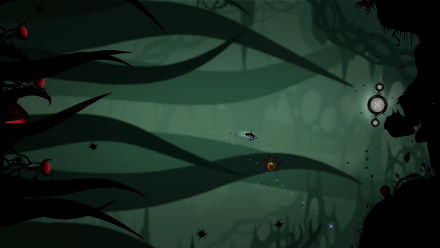 Samus Arenot?
Insanely Twisted Shadow Planet has clear gaming influences, and it won’t take you an age to work them out. You’ve probably heard the Metroid comparison again and again, but that’s because they are so damned alike. From the vivid world set out before you, to the ‘power-ups’ which improve the abilities of your ship, the levelling-up, the over-sized bosses and the need to use different elements of your ship in order to progress through the game’s ‘puzzles’, it all feels very familiar. The only obvious difference is that you’re not controlling a hot blonde in a spacesuit, you’re navigating a flying saucer. More’s the pity, eh?

The game will see you charting one large open map rather than going through set levels; as you gain more gadgets, you can progress to different areas of the map. You start the game with no way of defending yourself, equipped with only a scanner, enabling you to take in details and better your knowledge of this strange world, but also to learn enemy weak points. Over time, however, you will gain new weapons, gadgets and power-ups for your ship, all of which will be important for your progress. Gadgets, such as the grappling arm, for example, will be necessary for you to pick up rocks, either to dislodge environment stuck in your way, or to kill certain enemies. Pressing the RB button brings up the full radial dial menu, where you can select your item of choice. If you prefer, you can also hot-key any of your equipment to buttons on your pad, to make selecting your item of choice even easier.

While ITSP has an obvious likeness to Metroid, I also found similar traits to the likes of Ecco the Dolphin with its navigation through dark and treacherous terrain, and the variety of enemies you encounter. It can also be compared to Limbo for the darkened 2D graphical style.

Frankly, though, it is an injustice to ITSP to keep comparing it to other intellectual properties as it is a unique entity unto itself, even if the similarities are blatant at times. 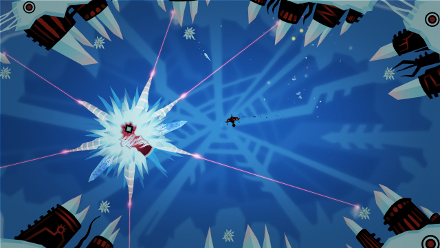 The Ice Boss giving you the cold shoulder.

Picasso in Space
The most striking detail about ITSP (and rightfully so) is the artistic direction from Michael Gagne. You only have to watch the game in motion for a few minutes to realise that it’s unique, and unlike anything else out there at the moment. It’s also one of the few games where a simple screenshot can do a disservice. The environments thrive and flourish; they react to your approach, but they also continue to move around in the background, regardless of where you’re situated. The idea of a living, breathing alien world has been painstakingly envisaged here, and can provide wonder as quickly as it can instil panic.

The squid-like abominations on display can be terrifying, and it’s not since the days of Dead Space and Silent Hill that I’ve actually felt so chilled and disturbed by such creations, something that really does feel other-worldly. However, it’s not just the appearance that chills you to the bone; it’s the stature and scale of the beasts which you come up against in your pitifully sized vessel. You wonder what kind of damage you could possibly inflict on such creatures with your limited range of weaponry, and so the concept of ‘solving puzzles’ to beat bosses definitely resonates, almost reaching Portal levels of satisfaction when you succeed.

What’s equally wonderful is that the game never becomes stale, and the environments are always fresh. There’s never a sense of ‘Oh, I’ve seen all this before,’ or ‘wasn’t I just there?’. Not only is the world well designed, it’s also full of variety. 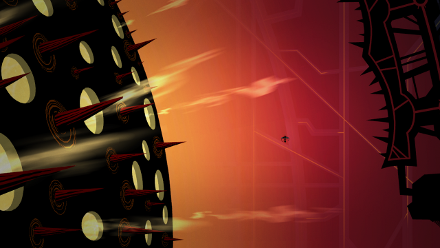 In Space…everyone has heard this line
ITSP’s background music can definitely stir unrest in the player, especially when you get deeper underground, and are engulfed by the darkness. As the environment changes, though, so does its music, and just as easily as the music can shake you to the core, it can also fill you with a sense of tranquillity. It is absolutely dependant on where you’re situated on this Insanely Twisted World.

With the graphics and music working in perfect harmony together to form this elegant, yet malicious environment, ITSP becomes one of those games where you find yourself always on edge. You’re never quite sure what is going to happen, and are always looking at every angle to ensure you’re not caught by surprise. However, don’t fully depend on what you hear to guide you through the scary-bits; while the sound effects and the music can sometimes act as your guide, and help you prepare for some surprises, it is silence that offers the biggest shockers!

Some of the soundtrack has been composed by famed Norwegian black metal band, Dimmu Borgir. They are an excellent choice, and absolutely help structure an intense, isolated atmosphere that betters anything done on the Arcade before. Yes, even more so than Shadow Complex!

We are one
The elegant campaign is not the end, though. Added onto the game is something called ‘Lantern Mode,’ which enables you to play locally or online, and sees the player trying to carry a lantern as far as possible down a randomly generated tunnel, whilst being chased by a giant beast! The very thought is enough to get the pulse pounding, and when playing it, you can expect to feel very similar emotions. Co-operation will be key here. You may think it’d just be a scramble to snatch the lantern and fly forward as fast as possible, however, your team mates will need to help the ‘carrier’ to ensure that your group survives as long as possible. 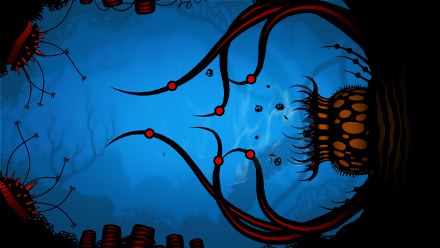 For example, other ships will need to remove debris out of the carrier’s path and distract the beast, so they can keep attention away from the carrier. Before you start, you will be able to designate certain upgrades to players based on their ‘role’ within this particular round of play; this adds a deeper strategic element to Lantern Mode, and proves that the preparation for the game is as important as actually playing it. It also means that you’ll need a set plan before going forward, otherwise you’re liable to taste defeat very quickly.

Even though the mode is primarily a co-operative effort, individual scores are attributed, which does add a competitive edge to the game. So, just because you’re not the carrier, it doesn’t mean you should slack off and not bother. If anything, that should be more inspiration for you to rack up the points and earn the merit of MVP.

It’s a very exciting mode that, in of itself, is actually quite unique. I’m not sure how long people will be playing it, but as an addition to an already excellent package, it certainly warrants your attention, and can definitely become addictive if you allow it.

Twisted perfection?
On the whole, ITSP is bloody excellent. It haunts you when you’re not playing it, and enthralls you when you are. Unfortunately, the game is short, and whilst the puzzles are challenging, you can find yourself breezing through the game quite quickly once you understand the rules and mechanics. That being said, I wouldn’t have the length or the quality changed in any way; this is what makes the game as good as it is. It never outstays its welcome, yet it manages to leave a lasting impact. Plus, there’s a lot of replayability to be had, with a sea of collectibles and, of course, Lantern mode.

Undoubtedly, ITSP is the crown jewel of this years Summer of Arcade line-up. It’s a beautiful, compelling, and unique intellectual property that proves the Arcade title is as important to your gaming library as any game you can pick up from a store shelf. An absolute triumph!