Wanna be in a movie?! If you were asked that question what would you say?! Me personally, I would say hell yeah! That’s not why we’re here though. We’re here to talk about games but luckily the game we’re talking about takes you into the movies. Rather than sitting on the back row with a cute, sexy, beautiful woman groping your manhood (or if you’re a woman think sleazy man groping your entire body), you’re entering the world of movie making and debauchery. Where the big breasted women wear bikinis, have an IQ the equivalent to that of a peanut, and have sex with average guys like me and you because they think its a cure for cancer. 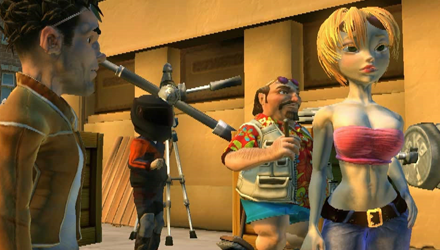 Can you hear me... Hello?! Are them things switched on?!

Ok what am I supposed to do here?! Is it in?
The movie studio is very open world and your job is to complete the various objectives around the studio while looking for the mole. As you complete each task you do you unlock more missions to do. Some of the mini-games include photographing scantily clad big breasted babes doing various acts, solving puzzles in a platforming fashion and racing. There are also some directorial mini-games where you have to call the shots on a movie set. In some missions you have to choose your words carefully to progress as you get to pick what you are going to say to certain people. There are also some light shooting elements and fist fights too. There is some variety with the tasks, but these can become quite repetitive. For the most part you will be running or driving around the studio going to various sets to get to your next mission and this can become tedious at times. There also is a lot of “go fetch” missions that are either driving from point to point or platform based. You can choose whichever missions you want to do in whatever order you wish once you open up a few. There are a variety of collectables too. You can collect some outfits by completing parts of the story and there are some Larry shaped golden Oscars to find scattered about the sets as well.

The HUD is similar to that of GTA and Saints Row and a mini-map shows you where your next objective will be. Your health is displayed as a heart and it is possible to kill yourself. The control system is very basic, with some actions like the action button mapped to two different buttons. 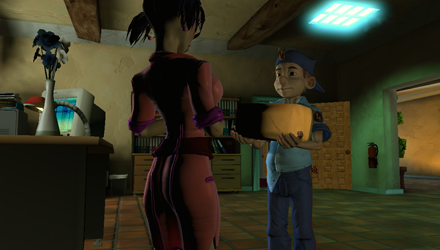 The camera for the most part works ok but occasionally has the habit to whiz off to an angle that’s not appropriate. For most part of the game it’s free-moving but occasionally it’s fixed in one position, especially during the platforming mini-games. It can become annoying though as it is sometimes hard to tell which way to go and not being able to look can hinder you somewhat.

Wow, that bra looks huge! Can I wear it on my head?!
The graphics are not the best in the world, and to be frank, they are mediocre at the best of times. Occasionally they look poorly rendered and broken but overall they are do a job. This is mainly down to the poor optimization issues with the unreal engine. All the characters that are female tend to all look like Dolly Parton lookalikes with the big lips, big chest and they all pretty much look the same in body and face but not in hairstyle (pretty much a cartoon characters wet dream). As for the male characters, there is variety in all the main ones. The remainder of the characters are your generic types that you find as you’re wandering around.

I love to make a girl scream!
The usual sound effects are present for jumping, shooting, and driving but the music seems to be lacking somewhat. The ambient background music is present for part of the game and is dependent on the scenario, so if the theme is Wild West then you get Wild West music at times. Some of the time though there is no music and you just have to make do with the jumping effects.

The voice-acting is well done but becomes repetitive with the comments from Larry. For example if you jump in water he will say ‘this is colder than a witches tit in a brass bra’, which is funny the first time but grating every other time he says it. Elsewhere, depending on what he is doing he will comment accordingly. The excessive use of sexual innuendo can be witty for a time but like the rest of the game, it gets boring and you just stop listening. Surprisingly there is some star power here, with celebrities such as Carmen Electra, Nikki Cox, Shannon Elizabeth, Jane Lynch and Tom Arnold making an appearance, but this isn’t enough to keep it interesting.

Wanna go back to mine and have some fun? I have Scrabble!
If you want to enter the dysfunctional world of movie-making, full of sex, sex and more sex, chat up movie stars and sleep with secretaries in this cross between a Jenna Jameson movie (without nudity) and Scene It, then you may like this game. Sad fact is that it’s let down by a whole host of issues;  poor storyline, optimisation and lack of imagination with the mini-quests. You probably would be hard pushed to finish the game too, as it does get very boring, and although it does have its moments but they are very short-lived. Unfortunately this game should be left in the shop, but if bought treated like your mum’s knicker drawer… never opened!