As a youngster I was kind of infatuated with motorbikes, not racing bikes but motocross. This developed after years of watching kickstart after school and riding the mini bikes at the fair at every opportunity. This diminished as I got older but when I got married a few years ago I couldn’t help but take advantage of the stag-doo option of Quad Biking and loved it. As such, when the review copy of Nail’d hit the TIMJ offices I was quite keen to get a look in.

Nail’d is a new arcade racer developed by the creators of Call of Juarez and Chrome: Techland for the PS3, Xbox 360 and PC. Billed as the “fastest off-road arcade racing game”, it is something of a hybrid of Motorstorm and Pure with an added dose of Billy Whizz. I have recently been spending time with the Xbox 360 version to find out if it’s a Nail’d on winner. Read on to find out.

Naturally, as a racing game, there isn’t really a story per se to Nail’d. What there is though, is a tournament mode where you take your chosen rider from a brief tutorial where you learn, literally, how to ride a bike to the Nail’d Grand Finale via a multitude of races, time trials and stunt events on fourteen tracks across four regions at breakneck speeds on either a Motorcross bike or Quad bike.

Hard as nails
Before you start you get to choose your rider, male or female and your vehicle, Motorcross (MTX) or All Terrain Vehicle (ATV). Both can be modified in looks and colours, with the characters having eight different suits for each of four different styles, and the vehicles having changeable parts in Body, Exhaust, Engine, Handlebars, Shocks and Wheels. These parts all affect the balance of your vehicle by adding or removing from the ability of Steering on the ground, Steering in the air, Boost Regeneration, Boost Capacity, Acceleration and Boost Acceleration. You can also edit the paint job to one of a number of unlockable preset options or just use blanket colours to style your vehicle yourself. 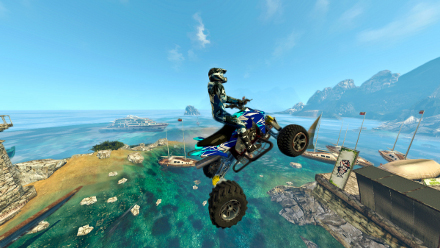 Big air but no tricks.

Getting the balance of the setup is important as you will notice the subtle differences in performance and on the harder difficulties this will have an effect. Admittedly, on the easy level the challenge is fairly low so it doesn’t make too much difference what you do with the setup.

From here, it’s into the tutorial where you are given the basics. Steer with Left stick, accelerate with RT, brake with LT and boost with X or LB. You can alter your traction by pulling the left stick back or pushing forward. This enables you to perform the odd wheelie or get extra air and distance to jumps or keep you closer to the ground and shorten jumps. Although there aren’t really tricks as such in Nail’d, moving left and right whilst airborne will not just change your direction but also prompt your rider to stick a leg out. Personally, I was a little disappointed here as I felt the addition of genuine tricks would have added an extra dimension to the gameplay. Instead you gain points and boost by landing jumps and pulling off “Boost Feats” such as knocking an opponent off the course or boosting as you land and going through gates that are scattered across the courses.

Once you’ve learnt the basics you go into the tournament proper, beginning with the Amateur Leagues, which introduce to the four locations; Arizona, Yosemite, Greece and Andes. To progress through each stage you will need to earn a Bronze medal or better. The tournament mode progresses with a multitude of different events from standard single races to cups, which require you to accumulate more points (1000 for a win, 900 for second etc) than your opponents across multiple different events. 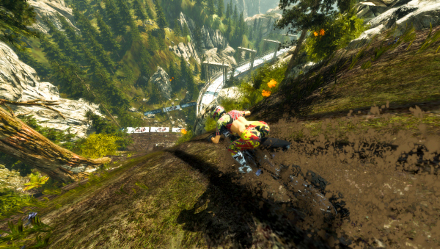 Besides the standard first-past-the-post races there are time trials, which require you to hit the checkpoints before the timer reaches zero and stunt battles, which see you accumulate points over the course of the race and when the first person crosses the line everyone else starts to lose points until they too finish the course. In these events winning isn’t always the key  to success as you don’t gain any bonus points for your placing and will often find that the guy finishing third or fourth comes out on top as they’ve spent time building up the score. In addition there are also a couple of mutators that crop up along the way. These are “No Collision”, which removes the player to player collisions and “Boost Madness”, which maxes out the boost meter for the entire race.

All the courses in each of the four areas are pretty open with numerous routes through. The key is finding the right route in each event as you can shave seconds off your lap time just by taking the right turn.

Besides the Tournament mode, there is a Go Offline mode which allows you to set up a race or tournament of your own making to get some practice in. This is also where you will find the single player time attack mode that allows you to pick any course in the game and take on the developers best efforts in the form of a ghost. Should you be so inclined there are achievements on offer to best the developers in four, eight and all tracks. Let me tell you this is by no means an easy challenge and offers a nice alternative to the tournament. 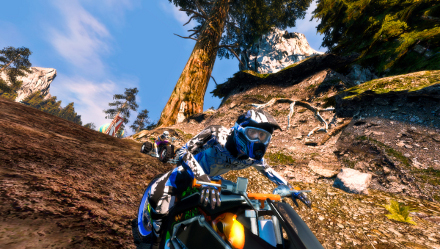 Nail varnish
Race arenas in Nail’d are impressively large and the team at Techland have done a good job of promoting this scale with the visuals. You can clearly see distant peaks as you fly around the courses and the detail remains high throughout. Vehicles are solid and the character models are also crisp and clear.

The graphical effects are also well done as you get the appropriate splatter of water or mud across the screen as you scream through puddles and across boggy areas. This hampers your vision for a few seconds, giving the feeling of actually riding through the mountains and is a nice graphical touch if a little frustrating at times. Although there are no crashes as such and therefore, no visual damage to vehicles, if you manage to go off course or hit a wall (which you will, a lot) then you will respawn. During this process, the colour drains from the screen as you see a slow-mo of your crash which will usually take the form of an explosion of motor parts or your chosen rider flying off your vehicle and head first into a tree.

On the downside, due to the nature of the game, some of the arena’s don’t have a huge amount of colour in general, though what there is, has a subtle shading that adds to the arenas beautifully. Unfortunately, it’s not all perfect; the spectators you see are at the start/finish line seem quite blocky and poorly animated by comparison to the rest of the game and there are times when the collision detection seems a touch harsh. For example you can fly round a corner and bounce off a tree one minute, while merely looking at a fence can cause your chosen chariot to explode the next. 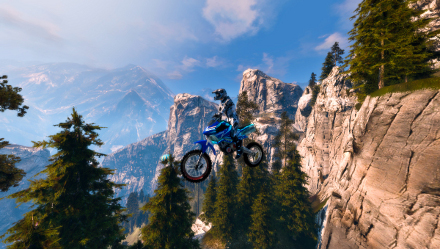 It's a nice place to visit.

Throughout it all, though, there is truly an impressive feeling of speed. You literally hurtle along, especially when boosting, at quite a lick and I haven’t experienced any drops in framerate during my play time.

Nail gun
Menu and background music is a collection of high adrenaline rock music and features tracks from bands like Deftones, Hatebreed and Fear Factory. There is a large selection of tracks overall but it is all Rock so if you’re not a fan of the genre you may be disappointed. For those not enthralled with the Rock you can turn the music down or off in the menus and have just the sound effects on.

The effects themselves are fairly good. Engines appear authentic and you can hear a slight difference between the MTX and ATV vehicles, the boost effect sounds a bit like a fighter jet afterburner, which fits the feeling of breakneck speed and crashes are also solid; be it an explosion or just a coming together of riders. You can even hear the odd bird song as you make one of the insane high-altitude jumps and the cheers of the crowd as you scream around a corner, even if you can’t see anyone watching the event.

Lots of nails
The multiplayer option in Nail’d allows System Link connection or the usual Xbox Live play with up to twelve riders. Matches can be created with a degree of freedom as you select either a Standard Race or Stunt Challenge, choose whether to have either of the Mutators on and decide on your course. You can also select to set an Event or one-off race. 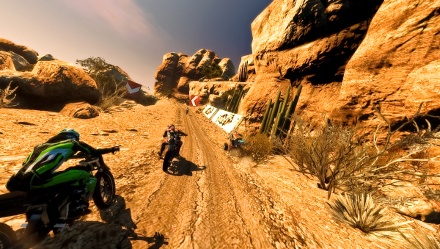 Now I have to add at the time of writing, I have not managed to fill a race with twelve racers, nor have I managed to keep the exact same people in a second race as people have been coming in and out of the game (during which, you can watch the ongoing race from the lobby). However, the Event option sets the game so that a score is given at the end of each race (1000 for a win 900 for second etc) as in the single player mode but during set-up you can only choose one track, so you simply re-race the same track in the same mode, with the same Mutators. Also from what I have seen, the points don’t carry forward to a second race so it seems a pointless addition.

It would of been nice to have the option to set up a tournament and choose, say, up to three circuits, each of which could be a different race mode and have different Mutators so you could get some solid group events going. (I’m hoping this may come in an update).

Nail’d on
Overall I was pleasantly surprised by Nail’d. I wont pretend I haven’t had moments of sheer anger at the collision detection or that I am particularly taken by the choice of soundtrack, but I have enjoyed my time with it. The feeling of speed is as good as I have seen anywhere and the multiplayer, despite the lack of a tournament mode, is easy enough to navigate and enjoyable enough to keep any racing fan happy for a while. Even if you’re not a fan of the genre Nail’d has enough to warrant at least a look.